College student who was allegedly assaulted had taken weapons to school 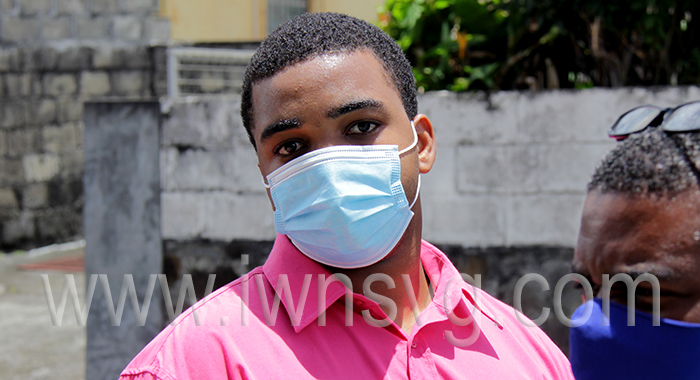 The virtual complainant, Romell Gibson, outside the Kingstown Magistrate’s Court on Wednesday, July 20, 2022.

The 18-year-old Community College student who was allegedly assaulted by a man and a woman at the Villa Campus in March has told the court that he took brass knuckles to school with him on the day of the incident.

The student, Romell Gibson, of Chester Cottage, told the trial at the Kingstown Magistrates’ Court, on Wednesday that he bought the “striking weapons” last November after a man in a red shirt asked him for money outside a bookstore in Kingstown.

Further, during cross-examination, Gibson admitted that after the alleged assault in March, one of his female classmates filed a report with police, alleging that he had assaulted her.

Jardel Williams, 21, of Brighton, and Tameka Phillips/Erescia Phillips, 29, of Ottley Hall, are being tried on a charge that, on March 8, at Glen, they did enter upon the St. Vincent and the Grenadines Community College in Glen, to wit its yard, with intent to commit an offence.

They are also being tried on a charge that on the same day, also at Glen, they assaulted Gibson, causing actual bodily harm.

Gibson told the trial that he first saw the defendant at the school’s Villa Campus on March 9, around 10:05 a.m., shortly after his first class.

He said a man who he had never seen before (Williams) approached him. “The man asked me to come here. I felt uncomfortable so I decided to try and walk away. But the man did not allow me to leave. … He then proceeded to push me on my shoulder and I went backwards.

There was another person with him — the female defendant (Phillips). The male defendant then shouted at me and threatened me.  He said, ‘Touch she again and yo dead, me boy’,” Gibson told the court.

He said that Williams then struck him on the left side of his face.

“I had in my possession two black brass knuckles in my left pocket. I then placed them on my hands because I was so frightened and afraid for my life,” Gibson said.

He said Phillips stepped in and also struck him.

“Then she stopped. She had an umbrella. She struck me with the umbrella. Then I attempted to strike her back. Then the male defendant started threatening me, shouting at me. He said that — I can’t recall the exact words he said the second time.”

Gibson said that Phillips then threw the umbrella that she had in his face then she and Williams walked away.

The complainant said a teacher at the college took him into a classroom and asked him to sit down and relax.

He said he was taken to the dean’s office and a teacher lent him her cell phone so that he could call his parents.

Gibson said he later saw Phillips at the Calliaqua Police Station, where he had gone with some family members.

He said the police issued him with a report of medical injury form, which he took to a doctor who examined him and recorded his findings.

He returned the forms to the police then went home to rest.

The complainant said that he had reason to go back to the police station the following week.

Gibson said that apart from the defendants, he did not have an altercation with anyone else that day.

He said he did not know who the “she” that Williams referred to was and that he was sure that it was the two defendants who assaulted him.

‘I have no relationship with anyone by that name’

Asked if he knows a student who the lawyer identified by name, Gibson replied, “I have no relationship with anyone by that name.”

“I didn’t ask about relationship, yet,” Connell said, and suggested that Gibson might recognise the person by face.

Gibson said he thought he would, and, with the permission of the court, the lawyer called a young woman into the courtroom.

Gibson said he recognised her and the young woman left.

“I’ve seen her in my classes,” Gibson said, but said he is neither friendly with nor have a relationship with the young woman.

He said he had never spoken to, touched, or asked the young woman to have sex with him before.

“Has she ever asked you why you treat her that way in school?” Connell said, at which point the prosecutor, acting Corporal of Police Corlene Samuel, rose and said that Gibson was not on trial.

“I don’t know what is counsel’s defence,” Senior Magistrate Rickie Burnett said in response to the prosecutor’s objection.

The lawyer asked Gibson to give the names of two other individuals who are in the same class as him and the female who had been in the courtroom, and Gibson did so.

He said that the police never asked him that question.

‘a reason for an interaction with the VC’

Connell suggested to Gibson that he had approached and touched the young lady inappropriately at school.

The prosecutor again stood up and said that Connell was putting to the witness an allegation that had nothing to do with the extant case.

Connell, however, said he was at great pains before the trial began to try to get the prosecution to indicate to the court the position of another matter “with nexus” to the trial.

He noted that in his evidence in chief, Gibson had said he had reason to go back to the police station after reporting his alleged assault he sustained.

But Connell responded that the matter he was putting to Gibson is related to what the prosecution is alleging against his clients.

“… a reason for an interaction with the virtual complainant,” Connell said. “It is common sense. I don’t see why the prosecutor takes things personally. It is her case.”

The magistrate allowed Connell to continue with the line of questioning.

Gibson, responding to Connell’s questions, told the court that he went back to the police station in connection with a report that the young lady who was in the courtroom earlier had made against him.

“I was informed that there were allegations against me that I touched the individual who was previously in the courtroom,” Gibson said.

The magistrate asked if that person would be called as a witness for the defence and Connell said “possibly”.

Gibson said he made a statement in relation to that allegation a Saturday after the March 9 incident.

Connell tested Gibson’s evidence about the locations and distances between him and the man and woman who he claimed had assaulted him.

The lawyer then honed in on the brass knuckles.

“Are you accustomed to being in brawls or fights?” the lawyer asked Gibson.

The student said he was not, nor was he trained in the use of weapons.

He said there are no Kung Fu or defence classes at the college in which he takes part.

“What part of the school syllabus includes the use of brass knuckles in school?” Connell asked.

“I do not know,” Gibson responded.

“Just to make sure you understand what I am talking about, can you describe what brass knuckles are and how they fit?” Connell said.

“They are placed on the hands, around the fingers, as a striking weapon,” Gibson said.

“But they don’t have to be offensive. You could have been using them as ruler in school?” the lawyer said.

Gibson said that was not the case.

He said his possession of brass knuckles was related to a separate incident, on Nov. 28, 2021, when he went to Gaymes Bookstore and “a strange man in a red shirt that I have seen before” asked him for money.

“I felt threatened by this man … I refused to speak to him or answer him. I then left Gaymes bookstore and went to the Kingstown Police Station but before I left the bookstore, I had taken two photos of the man with my cell phone,” he said.

Gibson said the police officer recognised the man from the photos and said they would handle the matter.

“I felt traumatised and afraid of this man. So I decided to purchase a weapon to defend myself with,” Gaymes said.

“So in a nutshell the next time a man in a redshirt asked you for money you would hit him with the brass knuckles?” Connell said.

He said he was not expecting a man in a red shirt to be at the Community College; neither did he hand over the weapons on entering the school compound.

Gibson denied that when he came out of his class, he had on the brass knuckles before the defendants approached him.

‘I am completely unarmed’

He also said that he only had two brass knuckles, rather than three, as the lawyer had suggested.

“By chance, do you have the brass knuckles?” Connell asked.

“I am completely unarmed, if that is what you are asking,” Gibson responded, saying he gave the brass knuckles to the police.

He said he was never charged for being in possession of an offensive weapon.

Connell suggested that after exiting the class, Gibson had put on the brass knuckles and when the lady approached him and started to say, “Next time you touch my sister–“, he started to attack her with your brass knuckles.

He said he took seconds to put on the brass knuckles and while he was doing so, the woman was standing in front of him.

“No. They did not wait,” Gibson said.

The lawyer suggested to Gibson that Phillips was defending herself after he began to beat her with the brass knuckles.

“No. She was the aggressor,” Gibson said.

“And you continued using the brass knuckles, that is when [Williams], as a man, was close by and looking at a man beating a woman with brass knuckles, he stepped in,” the lawyer said.

“No. That is not how it happened,” Gibson said.

The complainant further told the court that Phillips also had a brass knuckle but he did not mention this in his statement to police.

“But isn’t that the weapon that you said she had that she attacked you with and brutalised your face?” Connell said.

The lawyer showed Gibson his statement to police, in which he said that Williams approached and spoke to him first and then Phillips approached and began to speak to him aggressively.

“The woman attacked me and then the man joined her in the attack,” Gibson said.

“So it’s fair to say that [Williams] came in after you and her started to tango,” Connell said.

The complainant said that when Phillips mentioned her sister, he did not ask her who her sister was.

He told the court that Phillips did not say why she was present at the school.

“Neither of the defendants stated what they would like to talk to me about,” Gibson said.

He told the court that bystanders recorded the incident.

The trial was adjourned to Aug. 10