Police officers living in deplorable conditions at SSU base 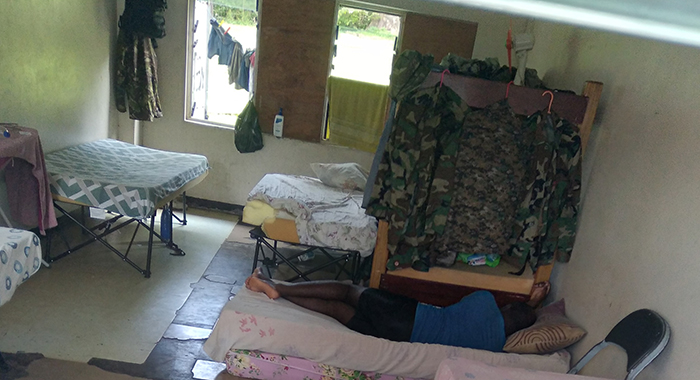 A Special Services Unit officer sleeps on mattresses on the floor in room with missing floor files and louvers at the SSU base in Old Montrose.

Police officers at the Special Services Unit (SSU) are living at their base in Old Montrose in conditions that they would expect to meet when they are out on jungle mission or training, one source has told iWitness News.

iWitness News has obtained photos of  a dilapidated building, with missing louvers and floor files, in which some officers have been forced to sleep on cots for months, causing back aches that have resulted in sick leave.

One source said that the contents of eight urinals empty into a gutter that runs through a shower where some officers have to bathe.

Further, the windows on that side of the building are missing louvers and when the day is hot, the stench can be intolerable.

iWitness News was reliably informed that when officers complained to their superior, they were told that they met the situation like that.

In addition to that, the missing louvers expose the police officers to the elements, and they are sometimes sprayed by the rain, exposed to mosquito bites, and the cold while sleeping at nights.

One source said that the building has been in that condition since at least around 2018.

iWitness News understands that some officers in one particular room have been complaining for months, since their beds were removed and given to recruits.

These five officers were given cots to sleep on, which is often a short-term arrangement.

After a month, the cots began to sink in so the officers started to put mattresses on them.

“The men look like bread and sausages on those cots,” one source said, referring to the extent to which the cots have sunken in because of how long officers have been sleeping them.

However, one of them was so affected and developed such serious backaches that he had to be sent on more than a weeks’ sick leave.

Some of the officers have resorted to putting their mattresses on the ground.

The SSU base is located at the Old Montrose Police Station, which is also home to the Police Training School.

iWitness News understands that the police station houses 100 police recruits and up to two SSU teams, each comprising 40 officers.