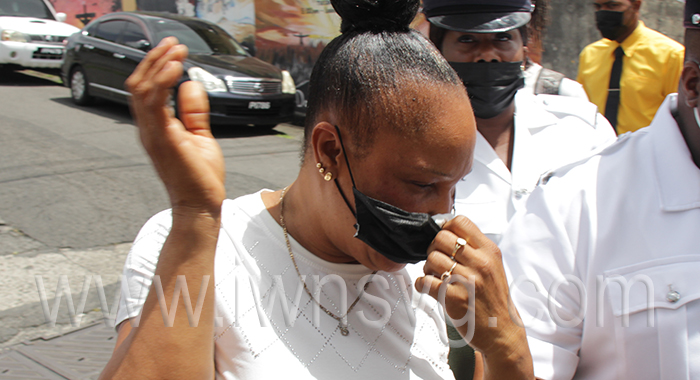 The cleaner who stole EC$7,805 worth of jewellery from her former employer’s home has been ordered to pay EC$5,105 in compensation by next March or go to prison for three months.

Further, Senior Magistrate Rickie Burnett bonded the defendant, Sherma Adams, 47, of Fair Hall/Georgetown, for one year in the sum of EC$3,000.

He handed down the sentence at the Kingstown Magistrate’s Court, on Monday, after Adams spent three nights in jail.

After Adams was arrested, she gave police a caution statement admitting to the offence, which led the police to Cashwiz, a consignment and thrift store in Kingstown.

Cashwiz indicated to the investigator, detective Constable Darell Sam that they bought a number of items from the defendant and paid her EC$2,855 in installments.

Only a gold chain and a gold ring, valued at EC$2,700, were recovered, Cashwiz having subsequently sold the other items that they purchased from the defendant.

Adams did not have a lawyer at her arraignment, but Grant Connell appeared on her behalf at Monday’s sentencing.

Adams had told the court that she has two children, aged 31 and 28.

Connell further stated that Adams was a teen mother.

He noted that she pleaded guilty, has no previous conviction and was remorseful for her actions.

The lawyer said that Adams had taken the stolen items to a business in Kingstown and had signed a document.

He said that the document remained with the institution and Adams received the cash.

The lawyer said he was baffled as to the applicable law “when one steals and another is the recipient of the stolen item and an institution takes a copious note of what is delivered. And when they part with it, they take a record of the buyer. So, I am lost as to how the police are unable to recover,” Connell said.

He said there was no indication of where the stolen items are, adding that he has the complainant in mind.

“… the police have a duty to go and look for them. It is a paper trail. If Rickie Connell goes to the institution to buy, he places his name, runs his credit card,” Connell said.

He told the court that a custodial sentence would have “a corrosive effect” on Adams and her family.

“She was sobbing outside and expressed her experience at the prison where she spent Friday to Monday morning,” he told the court.

“It was hell for her. So, I am asking the court to not consider a custodial sentence,” he said.

Meanwhile, Prosecutor Corlene Samuel told the court that the Crown was not looking at a custodial sentence.

“We notice the way the court proceeded with the matter and we await the court’s decision,” Connell said.

In handing down the sentence, Senior Magistrate Rickie Burnett said that Adams had three powerful mitigating factors in her favour.

He noted that she has no previous conviction, pleaded guilty at the first opportunity and appeared to show genuine remorse.

“Those three must count for something,” Burnett said.

He said that the aggravating factors of the case were that there was breach of trust and when confronted by her employer, Adams denied stealing the items.

“It was done over a period of time and those items were of importance to the complainant,” Burnett said, noting that the complainant had made that point.

“And those may never be recovered. Maybe they are gone forever. I think the defendant did suffer and is suffering by virtue of the weekend that she was in prison for,” Burnett said, adding that he hoped that Adams would never contemplate such a crime again.

The magistrate ordered Adams to compensate the complainant in the sum of EC$5,105 by Dec. 31, 2022 or spend three months in prison.

However, after Connell’s pleadings, the magistrate extended the period for compensation to March 31, 2023.

He also bonded Adams in the sum of EC$3,000. If she breaches the bond, she must pay the amount forthwith or go to prison for six months.