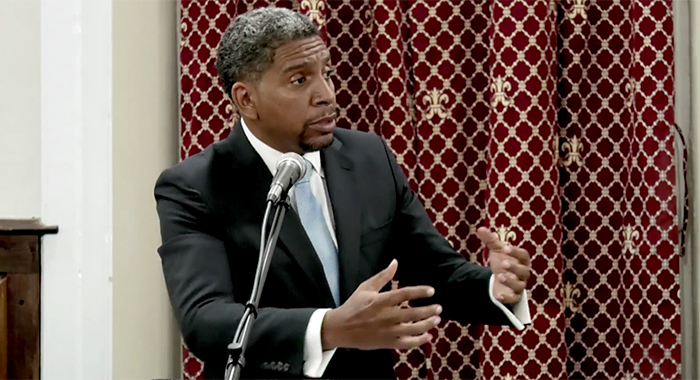 Minister of Finance Camillo Gonsalves says he was “confused” by the opposition’s accusation that the government is hiding information about the US$250 million port project even as the opposition said the involvement of the Caribbean Development Bank (CDB) will ensure accountability.

The minister made the comment as he closed the debate on a bill authorising the government to borrow US$62 million from Taiwan to go towards financing of the US$250 million project.

The bill was passed on Monday, with opposition support.

The finance minister said that the project’s Environmental Management Plan was published on the SVG Port Authority’s website on June 21, 2019; and the Climate Risk & Vulnerability Assessment and Environment and Social Impact Assessment since May 22, 2019.

He said that the Public Information Pamphlet was published on the same website on Sept. 20, 2019.

“So, I don’t understand, I am a little bit confused, that somebody could be saying we are hiding the environmental impact assessment when it has been on the website since 2019 — 187-page environment assessment…” the finance minister said.

He said that the environmental impact assessment is also on the CDB’s website, but is a little harder to find there.

Project ‘has to be executed with accountability’

During the debate, Opposition Leader Godwin Friday said that the new port must be affordable and well planned.

“… it has to be well thought out, has to be executed with accountability and this is why I am encouraged that the CDB is involved as a financier in this project because I know of the strict accountability procedures that they adopt.”

Friday said that with the CDB as one of the major funders of the project, he received a call from the Ministry of Foreign Affairs saying that the Barbados-based financial institution was doing a stakeholders tour in SVG.

“… they were speaking to various persons, the business community, the opposition and so forth about projects that they were funding in SVG,” Friday said.

“That has never happened in all the time that I have been in opposition. In fact, it’s like that was a door that was closed to anyone who was not in the halls of government.”

Friday said he welcomed the invitation as the tour also included the port development project.

“Unfortunately, the person who was doing the presentation did not have all the details and I was promised that I would be given additional information, which hasn’t arrived yet,” the opposition leader said, adding that the debate has reminded him to renew that request for the additional information.

“So that is encouraging and I trust that the government will not feel that we have to push and push and pull and pull to get information that is really information that the public requires. Because, after all, today we are being asked to support a loan that the Minister of Finance says tomorrow is going to be executed.”

The opposition leader told Parliament that he would ask the questions that the people of SVG want him to ask “on behalf of all the people of St. Vincent and the Grenadines, not just the people who feel that they have privileged positions here, that the information is theirs and not for the public and you come here and you ask the people then to support the borrowing of US$62 million, EC$160 million for the project”.

The opposition leader said that he knows the importance of the port project but also knows the implications of it not being done well.

“… politicians like to talk about big projects all over the world and some of them have delivered, others have been an albatross around the necks of the people of those countries,” Friday said.

“We don’t want that to happen here so we will ask the questions, even when we recognise the need for an important project. We will require accountability and transparency on the part of the people of this country. That is what I promise and that is what we intend to deliver.”

‘hidden from the members of the opposition’ – Cummings

Meanwhile, West Kingstown MP, Daniel Cummings, another opposition lawmaker, recognised the involvement of the CDB in the project and compared it with what happened with the construction of Argyle International Airport.

“A project in which the CDB is involved would require very careful professionals at every step of the way and I say that feeling confident that many, many of the very professional staff at the Caribbean Development Bank are well learnt Vincentians in several fields of endeavour including quality engineer and financial people and that gives me a level of confidence and assurance,” Cummings said.

Cummings spoke of “all that is gone before with the project, including the significant increase in the cost, the flaw in the design because of the inaccurate data.

“That, to me, is completely unacceptable that you will have consultants assigned to design and not make sure that they are given the correct data with respect to biometric studies.  That is unthinkable and that is a simple example of why cost goes up. Time is cost and revising is cost.”

He suggested that the contingency sum of US$42.8 million that the government has to put in, needs adjustment, given that the project is scheduled for completion in May 2025.

“I urge the honourable minister of finance to ignore his father and make available to all members of this house the project’s information as done by the Caribbean Development bank.  It is a requirement of good governance and it is in the best interest of this country,” Cummings said.

However, in his response to the opposition, Gonsalves said that the opposition was speaking about welcoming the CDB’s involvement while accusing the government of hiding and not providing information.

“The two things were incompatible in my mind because they are saying, ‘Thank you, CDB for being a part of this, for giving it its rigour’, but at the same time, saying, ‘But watch how they hiding things, watch how they not telling people things’ and all the rest of it,” the finance minister said.

“I found those things confusing.”