One person in emergency shelter after storm damages homes in St. Vincent, Bequia 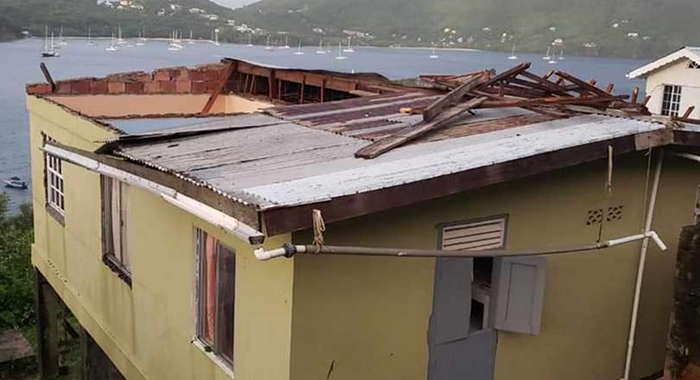 A house with a damaged roof in Bequia after the passage of a tropical wave Sunday morning.

One person was in emergency shelter in Bequia on Sunday afternoon after the passage of a tropical wave earlier in the day impacted the south of St. Vincent and the northern Grenadine island of Bequia.

Michelle Forbes, director of the National Emergency Management Organisation (NEMO), told iWitness News that a man was moved into the Bequia Anglican School after his house collapsed.

She said that preliminary assessments showed that three houses in Questelles and one in Kingstown Park were damaged.

Forbes said that assessors were making their way to Trigger Ridge, in Central Kingstown, where there were reports of damage to houses.

The director told iWitness News that NEMO had received reports of power outages in Calder, Brighton and Ottley Hall and she was awaiting an update on whether power had been restored.

Earlier on Sunday, Prime Minister Ralph Gonsalves, speaking on state-owned radio, said, “The good news is that the damage is not extensive”.

He said that forecasters had said that the south of the country was affected by “the tail end of a tropical wave”.

Gonsalves, however, said that there were gusts of wind across the country.

He said that meteorologist Billy Jeffers had advised him that the weather system had “subsided; it has passed.

“So, all those activities should go on without any problem this morning or for the balance of the day really. People who go in about any social event, according to the weather forecast, you’re going to be fine. As I say, matters have subsided.”

The prime minister said he had spoken to Carlos Williams, deputy director of Grenadines Affairs.

“In Bequia, there are some roads blocked with debris and he’s staying on the ground there and trying to marshal the requisite forces to get things cleaned up.”

Gonsalves said he had spoken to Forbes who had indicated that an emergency shelter was opened in Bequia.

“I believe that whatever limited damage there has been, the state entities will be taking care of matters.

He said that there were power outages in some communities, for instance, South Rivers, a community in North Central Windward, which he represents in Parliament.

“I’m trying to get VINLEC to find out when it’s going to be back. It’s probably back already. Somebody had a problem with their house up in Chester Cottage when we had a gust of wind. Isolated areas like that but as I say the good news is that the damage has been limited, no injury has been reported and certainly no loss of life. That’s also very good news,” Gonsalves said.

“And the good news is that it was the tail end of a tropical wave and that the tail end has dissipated, matters have subsided and the predictions for the rest of the day are that we’re going to have good weather,” he said.

One reply on “One person in emergency shelter after storm damages homes in St. Vincent, Bequia”