On leadership transition, Gonsalves tells ULP, ‘I have to guide you’ 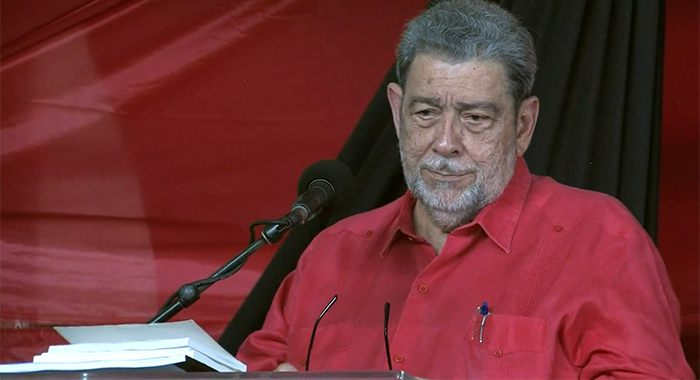 The ULP should have been electing a new deputy political leader at the convention, but Gonsalves said one week earlier, and again in his featured address at the event, that no one else was nominated to contest the post, in which Deputy Prime Minister Montgomery Daniel had been acting since 2020.

“‘Many qualifications are necessary adequately to equip the man selected as captain or leader and he may learn just as much as his mentality will allow. There is, however, one attribute that cannot be acquired. It is a gift of the gods and may be summed up in the phrase ‘personal equation’,” Gonsalves said, quoting Australian cricket captain, Montague Alfred Nobel, who had a first-class career in the sport from 1893 to 1920.

“‘When he or she possesses that most valuable trait, it goes without saying that the men and women under his command have great personal respect for him and faith in his judgement. He becomes a tower of strength, a rock to lean upon in adversity,” Gonsalves further said, quoting Nobel’s “The Game’s the Thing”.

“‘He inspires such confidence that they will work hard, keep on their toes and combine to give of their best no matter how long the way or how tired they are. His keenness and enthusiasm are infectious, and his men and the woman below him may respond readily and without effort. It is the dominant force that is of such tremendous value to the side, to the team, to the party’,” the prime minister said.

He told party supporters at the ULP’s 25th convention in Campden Park, that what Nobel says of a captain, “you can say for a leader, a leader of a party like ours…

“I have to guide you,” Gonsalves said.

Political observers have said that amidst fears that leadership transition could fracture the party, the ULP is playing it safe with the 76-year-old leader, who has been prime minister since March 2001.

Gonsalves had said in June that the party would have a new deputy political leader after the convention and that person is likely to succeed him as party leader.

And while he has said that the party has said that it wants him to remain as leader and take it into the next general elections, Gonsalves has offered no explanation about the about face on the issue of electing a new deputy political leader.

For years, Minister of Agriculture Saboto Caesar, who is into his third five-year term as MP for South Central Windward, and Minister of Finance Camillo Gonsalves — the prime minister’s son — who is into his second term as East St. George MP had been identified as the forerunners to become the next leader of the ULP.

During his two-hour speech on Sunday, Gonsalves broached the issue of leadership transition as he discussed “the frame within which we have to carry out our work over the next three years”.

General elections are constitutionally due by March 2026, but are expected by November 2025 at the latest.

The prime minister said that he has written a book, titled “A time of Respair”.

He asked party supporters to bear the word “respair” in mind, noting that it is an old word that has fallen into disuse for a long time, adding that it means “fresh hope after a period of convulsions”.

Gonsalves began using “respair” frequently sometime after an article in The Guardian last December mentioned it among “long-lost positive words” that should be reclaimed.

“While we are building better and stronger, we have to touch our spirit, our soul and we have to dig deep in the genius of our people. Our people, collectively, possess a genius,” Gonsalves told party supporters at the Campden Park Secondary School and media audiences.

“A leader must not just inspire. A leader must draw out from the people that genius within them. What is good in them, what is of quality in them and often to draw out of them the goodness and high quality which the people themselves may not as yet know that they possess but which you, as a leader, must draw out,” the prime minister said.

“Putting in, from the standpoint of inspiring is portrayed in a leader but it is incomplete because when you’re putting in the people depend only on what you put in. But if you draw, you draw the best from people. And you draw out that which is of such goodness and quality which sometimes the people themselves do not know that the process. And a leadership has to be sustained by the people and the circumstances.”

He said he has written on and studied the subject for years.

“I studied the subject and in one form or another I have been a political leader for nearly 40 years and I’m giving you the benefit of my knowledge and experience.”

He said that in 2012, he delivered a long paper about Frank Warrell’s leadership in cricket “and I made the point that the circumstances throw up particular leaders.

“And, in due course you will have to have an opportunity to have a successor named to Ralph because I am made of flesh. But for now, I am the leader of the Unity Labour Party and the party has decided that Ralph will continue to be the leader and you would have an opportunity this afternoon also to speak to that,” he said, referring to the business session of the convention, which is open only to delegates from the various branches of the ULP.

“Men and women make history but only to the extent that the circumstances of history permit them so to make and the leader must understand the genius of the people and several other things in order to keep a mass party and a government together,” he said and went on to quote Nobel.

He told party supporters that the main opposition New Democratic Party “is washed up, they don’t have any ideas. They’re confused.

“All they could talk about is selling passports and selling citizenship,” Gonsalves said, referring to citizenship by investment.

“They don’t have links with people, they don’t have any links with young people, with women, the marginalised and they are beholden to the internet crazies,” he further said of the NDP, which won the popular vote in the 2020 elections for the first time since 1998.

“You have accorded me responsibility to go forth and I accept it but when my time to depart takes place, don’t believe that once I have breath in my body that my love will diminish. It will grow stronger,” the ULP leader told party supporters.

“I am told that in the election this afternoon there is no contestation in respect of the positions and certainly none for political leader. So, constitutionally, I will be your political leader for another two years, at least. And I will be here as long as you want me to and if my strength holds not, I will tell you,” said Gonsalves, who announced last week that he will lead the ULP into the next general elections.

“But, at the moment, as the members in the Cabinet could tell you, I continue to work very hard and very smart and in the interests of the people of this country. As you can see from our programme, I have large ambitions and the party has large ambitions for the country, including and especially the poor and the working people, but for the nation as a whole.”

He said that against all odds, his government built the Argyle International Airport.

“Against all odds, the education revolution, against all odds, we have put together $650 million for the port, the Rabacca Bridge, what are we going to do with the $200 million dollar hospital to add to all the health facilities and more,” Gonsalves said.

“At a personal level, rely on me to continue to do my duty to you as political leader and as prime minister,” he said.