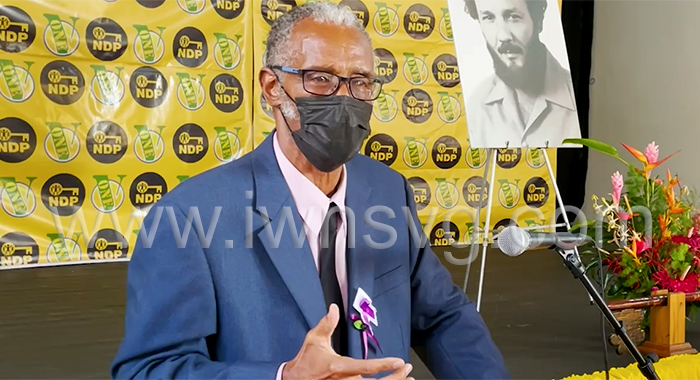 Former MP for South Leeward, Jerry Scott has suffered a stroke that has left him immobile and unable to speak, the current MP for the constituency, Nigel “Nature” Stephenson announced on radio on Wednesday.

Stephenson said that Scott, who he described as his “political father”, fell ill “two Saturdays ago” — July 23.

“… there is a very, very sad piece of news that I want to just break to some of our listeners,” he said on the New Democratic Party’s radio programme on NICE Radio.  “Sad in the sense that no one has died, but a representative that I refer to over the years as my political father, who has been there to guide me along, politically, … fell sick two Saturdays ago… he, unfortunately, suffered a stroke,” Stephenson said.

Stephenson said could now make the announcement about the former communication and works minister, having received permission from Scott’s family.

Stephenson, an NDP member, who has been representing South Leeward since 2010, said that he visited Scott Wednesday morning and he was “resting peacefully”.

“And I was saying to his wife, perhaps this rest is doing a hell of a lot of good because he looked 10 years younger resting there,” the opposition lawmakers said.

He said he knows there are some people who have heard about Scott’s illness while others were hearing about it for the first time.

“I don’t know why? Sometimes you say certain things that you don’t know why people say things, as if you know something’s going to happen, whether consciously or unconsciously, but that is the conversation that he … had with the people closest to him, his family: ‘I have done well in my lifetime. I am at peace.’ And shortly after that he … suffered an unfortunate stroke.”

Stephenson said Scott is unable to communicate verbally, but other than that, “his mental faculties are in place because he’s able to respond to all of your commands…”

He said he knows that Scott has touched a lot of lives around the country, adding that people from around the world had called him saying that Scott was good to them and they owe much to him.

“So, I’m asking us not to sorrow. He is not dead. But let us pray. Let us remember him in prayer because we know that there is no limit to what prayer can do if we do that, genuinely.

“The New Democratic Party has reached out to the family and the family is very, very gracious. They appreciate very much the fact that we are there to show solidarity with the family,” Stephenson said, adding that it does not give him pleasure to be the bearer of bad news.

“But it is what it is. He is in good, very good spirits. I know we’ve heard that from some people on some other sides somewhere, but seeing is believing. But I’ve been there and I’ve seen. You look at the gentleman and there’s nothing that tells you that he is not well, save and except for the fact that he is immobile at this time.

“So, let us pray for him and his family and let God’s will be done.”

Speaking on the same programme, Central Kingstown MP, Major St. Clair Leacock, said he has had a long and good relationship with Scott and had known about his illness.

“It is something we had to await the family’s permission to share with the public because these are very private matters and I don’t even know that the home will want to be flooded with calls of expression of concern,” he said.

“I think the call that you have made that we keep him in our prayers is sufficient then and we simply can only hope that Jerry comes out of it.

Leacock said he was “just short of words”, adding that the late John Horne, a former West Kingstown MP, and Scott, were “two of the best politicians you could ever meet.

“What I call a politician’s politician. Simply the best.”

Based on Stephenson’s announcement, Scott suffered a stroke one day before government senator, Julian Francis, 71, who is also minister of urban development, energy, airports, seaports, Grenadines affairs and local government, and general secretary of the ULP.

Francis remains in hospital in Barbados, where he was taken after suffering a stroke, resulting in bleeding in the brain on July 24.

On Wednesday, Prime Minister Ralph Gonsalves, giving an update on Francis, said the senator is “improving day by day.

“Still not out of the woods. I want him to take as much time to get back to full health. And I keep my fingers crossed, and we continue to pray,” Gonsalves said, adding that he had spoken to Francis Tuesday morning.