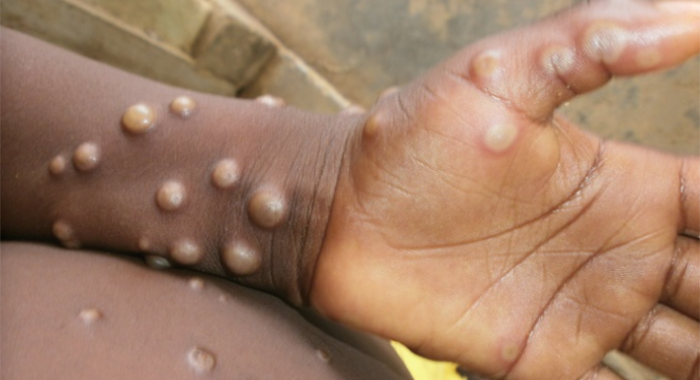 St. Vincent and the Grenadines is preparing for the possible arrival in the country of monkeypox, a viral infection similar to smallpox, several cases of which have been detected in the Caribbean.

Since early May 2022, cases of monkeypox — which was first detected in monkeys in 1958 — have been reported from countries where the disease is not endemic, and continue to be reported in several endemic countries, the World Health Organization (WHO) said.

Most confirmed cases with travel history reported travel to countries in Europe and North America, rather than West or Central Africa where the monkeypox virus is endemic.

This is the first time that many monkeypox cases and clusters have been reported concurrently in non-endemic and endemic countries in widely disparate geographical areas.

On July 23, WHO declared the escalating global monkeypox outbreak a public health emergency of international concern. The vast majority of reported cases are in the WHO European Region.

In giving an overview of the outbreak in Kingstown this week, Dr. Alisha Bonadie said that as of July 29, there were over 21,000 cases worldwide and 75 suspected deaths in Africa — mostly in Nigeria and Congo — two deaths in Spain, and one each in Brazil and India.

The disease has been detected in 79 countries, 72 of which are non-endemic.

In the Americas, Mexico has recorded 59 cases, 12 in Columbia, three cases each in the Dominican Republic and Ecuador, two cases in Jamaica, and one case has been recorded in Barbados, Martinique, Venezuela and Panama, respectively.

The incubation period of monkeypox is usually from six to 13 days but can range from five to 21 days.  The disease is often self-limiting with symptoms usually resolving spontaneously within 14 to 21 days, WHO said.

Bonadie said the symptoms include extreme exhaustion. “… you are tired; you just can’t seem to find the energy to do anything; you’re not motivated to do anything at all”. Symptoms also include “a very distinct vesicular rash”, which starts in the face, and spreads to the hands, the feet, and the rest of the body.

“Accompanying this rash, there’s going to be lymph nodes associated, and you’re going to have your usual viral symptoms, like when you have the flu, and you have these body aches and pains,” she said.

People who suspect they may be infected with monkeypox are advised to seek medical attention as soon as possible.

Dr. Jose Davy, an infectious disease specialist who spoke at the forum, told iWitness News on Thursday, that mass vaccination against monkeypox is currently not recommended.

She said that even in developed countries that have recorded a significant number of cases, vaccination is primarily reserved for people such as military personnel who travel to countries where the disease is endemic.

Speaking at the same forum, acting Chief Medical Officer, Dr. Roger Duncan said that SVG did not have monkeypox vaccines in stock, “because the access to these vaccines are not the same way we access vaccines under the COVAX or from the PAHO revolving fund for … COVID-19 vaccine.

“It’s is a little different, you have to pay directly for them, you have to pay upfront, they’re pretty expensive. There are issues about minimum order and so forth,” he said, adding that the region has begun conversation about how best to access vaccines.

He said that among the temporary recommendations from WHO is that countries mobilise national resources from within and outside the public healthcare system.

Duncan, whose substantive post is medical officer of health, said the structure set up in 2020 in response to the COVID-19 pandemic is still functioning and that the Health Sub-Committee of the National Emergency Management Organisation will also advise on the response to the monkeypox virus.

“This is important because through this sort of arrangement, we’re able to better mobilise resources that would come outside of the regular budget that’s available to the Ministry of Health,” Duncan said.

He said this relates to the ministry’s ability to be able to detect monkeypox cases quickly, the first pillar of which is to have access to safe, reliable sustainable testing for monkeypox.

The Chief Laboratory Technologist, Elliott Samuel had indicated that the country is capable of processing about 400 monkeypox test kits in-country per day, Duncan said.

The health ministry is also discussing with regional and international partners regarding access to additional testing.

Duncan said the health ministry had begun conversations with healthcare workers about identifying suspected cases of monkeypox and has drawn the probable case definition quite wide.

“We’d rather have things fall into this broad basket that probably end up not to be monkeypox than to make it narrower, and things fall off the side that were monkeypox. And that is what is going to help us as we go forward,” Duncan said.

He noted that monkeypox is an emerging disease and SVG has to be careful, as there are still many unknowns and must spread the word in the communities, church, schools, or anywhere people gather.

He said that the people at greater risk for a worse outcome are similar to COVID-19.

This includes the elderly, people with underlying chronic conditions, such as diabetes, heart disease, and kidney disease.

“So on one hand, we need to be able to build our healthy cells, which means promoting healthy lifestyles, well being, which include the issues of diet, rest, exercise, and so forth.

Regarding screening at ports of entry, Duncan said there are currently no tests-to-fly regulations or any protocols to say that one must have a monkey pox test before one can enter a country.

“We have surveillance officers, and not all of them are trained healthcare workers, but they have been trained, people who’ve trained from the COVID 19 pandemic, to be able to physically detect,” Duncan said.

He said that the public health measures that would be applied “would be directly proportional to the risk that exists. … if we get to the point where there’s a significant community spread, we’d have to restrict people’s movements.”

Duncan said that it is important for people who are infected or suspected to be infected with monkeypox to follow the orders of public health officials.

“It’s all going to fall down if the citizens don’t play their role, if we all don’t take responsibility for our actions, and do what is in the best interest of the community at large,” the acting CMO said.