Vincy students off to the Isle of Man 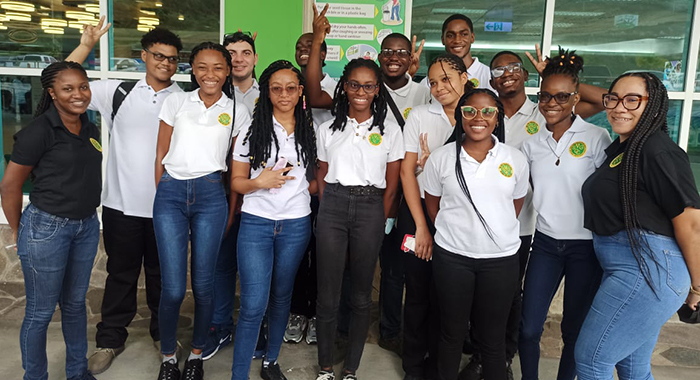 “Isle of Man here we come!” were the excited and joyous sentiments echoed by 12 students of the Community College who left SVG on Sunday for Isle of Man to participate in the inaugural session of the Isle of Man — St. Vincent and the Grenadines Education Programme (ISEP).

ISEP is a newly registered charity in the Isle of Man comprising a small group of volunteers of both island states, set up to provide scholarships and travel grants to Vincentian students. From Aug. 1 through Aug. 20, the students and two teachers (as chaperones) are in the Isle of Man for three weeks, for an inspiring mix of classroom sessions, field trips, and other activities, to expose them to another culture, with an emphasis on heritage, environmental sustainability and practical life skills.

A field trip stop-over in London to visit historical sites is scheduled as part of the programme.

“All 12 ISEP candidates are remarkable young persons, having a combination of sound academic achievements and all-round good citizenship. The chaperones are Stacy Balcombe, a senior lecturer at the Community College and Kimsha Williams, a businesswoman (designer, KMK Fashion), trained medical physicist and teacher, having her own online school, ‘Learning for Living’,” a press release said.

The students and chaperones were selected through a transparent application and selection process, comprising a publicly available application form together with relevant information about the programme in an “Invitation to Apply” document, standard criteria for short-listing applicants; and standard and objective interview and evaluation processes.

It is very likely that ISEP 2022 would have lasting positive impact on their lives. Indeed, ISEP embodies the theme of the “Art of the Possible”, which propounds that the opportunities are endless for young people, no matter what their personal circumstances may be.

ISEP presents a unique educational opportunity for young Vincentians, which will, at the same time, strengthen links between the island nations of the Isle of Man and SVG and open valuable opportunities to the world at large for the country’s youth.

Starting in 2023, ISEP will fund two annual boarding scholarships for the two final years of school at King William’s College, leading to the International Baccalaureate qualification.

ISEP arose out of the positive links which were developed over the past decade between the Isle of Man and SVG through the Small Countries Financial Management Programme (SCFMP), another Isle of Man registered charity, which offers an annual capacity building executive programme in the Isle of Man and at the Oxford University, England, to senior officials in small countries in the African, Caribbean and Pacific regions.

So far, 16 senior officials from SVG have participated in this fully sponsored programme and SVG has been commended for its consistently high quality of participation.

Professor Timothy Cullen is the founder of the SCFMP and the Small Countries Financial Management Centre, and the founder of the Oxford University programme on negotiations. He is presently a director of the SCFMC, together with Vincentian, Sharda Bollers, an attorney-at-law, former executive director of the FSA, IFSA and the FIU, and SVG’s participant in the inaugural SCFMP.

Cullen is the founder of ISEP and Bollers its co-founder.

Cullen was especially moved by the plight of SVG when the country was disrupted by the devastating volcanic eruptions of April 2021, while simultaneously dealing with the COVID-19 pandemic, an outbreak of dengue fever and the effects of Hurricane Elsa.

He found the impact on education to be particularly striking as schools were damaged or turned into evacuation shelters, and studies were curtailed for thousands. This inspired him to spearhead the establishment of ISEP, assisted in SVG by Bollers and Lavinia Gunn, also a Vincentian citizen, a hospitality trainer and former business entrepreneur.

Gunn is a director and trustee of ISEP and has a significant track record with charitable causes.

ISEP’s five Isle of Man trustees and two SVG trustees either attended (or taught at) King William’s or the Buchan and/or are involved with the management of the SCFMP.  Additionally, a few key persons also provided voluntary support locally and in the Isle of Man to assist with getting ISEP 2022 of the ground.

ISEP was immediately strongly welcomed and endorsed by the Prime Minister of SVG Ralph Gonsalves and the Minister of Education Curtis King, together with other relevant agencies. Governor General Dame Susan Dougan, General Sir John Lorimer, Lieutenant Governor of the Isle of Man have agreed to be co-patrons of ISEP.