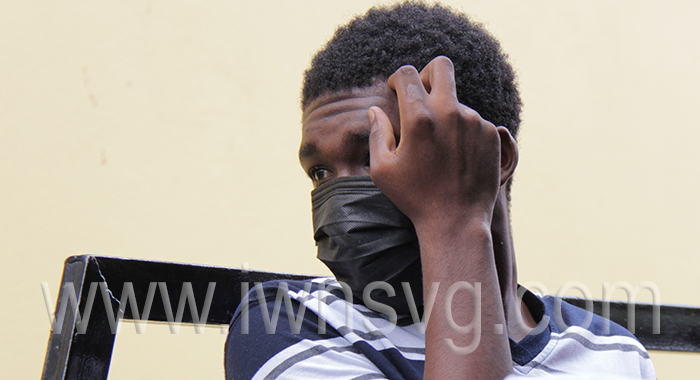 A 21-year-old Chauncey man was, on Monday, jailed for putting a gun to the side of a 16-year-old villager and telling him, “Yo nah bad now? Yo nah geh mouth now?”

Chief Magistrate Rechanne Browne imposed a sentence of one year and five months on Carl Quow, after highlighting the gravity of the crime.

“These are young men. I have my concern about them being out late, at that hour and they have gotten a taste of what being out late at night and exposed can cause,” she said of the incident, which occurred in Chauncey at midnight on July 23.

“One is running home quickly — fearful; one is held up at gunpoint. This is St. Vincent; young men having a future. Why should it be cut short? It could have gone wrong and we could have heard a body was found near the Methodist Church at Chauncey, if somebody else was not around,” she said.

Another 15-year-old boy as well as a 13-year-old testified in the matter, each of the witnesses appearing with a parent or guardian at their side because of their age and, therefore, cannot be named in this article.

The virtual complainant (VC), who attends a secondary school on the leeward side of St. Vincent, told the court that he lives in Chauncey with an older sibling.

He said that he has known the defendant for about a year but they are not friends.

The VC said that while Quow used to try to talk to him, “I ain’t used to really talk up to him”.

He told the court that on July 23, about midnight, they were “on the block” at a shop in Questelles.

On hearing this, the magistrate looked at the defendant quizzically and the prosecutor, Station Sergeant of Police Renrick Cato, said, “Yes, your honour. At 16 years.”

The complainant testified that while there, he saw Quow, who was wearing a black shirt and bleached-out pants.

“He tried to talk to me. He was talking about an incident that happened back in school with me and a boy,” the complainant said, adding that he responded to Quow.

The complainant said that he later left for home and when he got to the gap near the Chauncey Methodist Church, Quow held on to him and put a gun to his side.

“He asked me if you nah bad now, if yo nah geh mouth now. I laughed and pulled away my hand. He was holding my hand,” the complainant said, adding that the 15-year-old came and told Quow, “Llow him out.”

The complainant said that after the incident he went home.

“I was scared when he put the gun at my side,” the teen said, adding that there was a streetlight in the area.

He said the gun was black and of a length that it could fit into a pocket.

“As soon as he put it to my side, I watched it. I saw it for about 20 seconds,” the complainant said.

He said that after Quow released his hand, Quow went back over the other side of the road.

“When he was walking going over the other side of the road, he put the gun back in his side. And then I went home,” the teen said.

He said that the next day, he went to Questelles where he met his friends playing cards and he joined the game.

As a result of what he was told, the complainant left and went home and was lying in his bedroom when his older sibling asked him if something had happened.

The complainant told the court that on July 26, at night, the police took him to the scene of the incident with Quow and he pointed out the area where it happened.

During cross examination, Quow, who did not have a lawyer, questioned the complainant about the clothes he (Quow) was wearing on the night of the incident.

The complainant maintained that Quow was wearing a black t-shirt and bleached-out jeans.

“When you say I pull something pon yo, claiming to be a gun, which side I pull it from?” the defendant asked.

“Left side,” the complainant responded.

“Which side–?” the chief magistrate said, apparently not having heard what the complainant had said under his facemask.

“Which side I pull the gun from?” Quow responded.

Meanwhile, the testimony of the 15-year-old, a resident of a neighbouring village, corroborated the complainant’s version of the incident.

He said that after Quow released the complainant he crossed over to the other side of the road, so he (the witness) started to jog toward his home.

During cross examination, the witness told the court that before Quow crossed the road he saw him put something in his waist quickly.

The investigator, Police Constable 515 Haywood testified in the matter.

Quow had no questions for the investigator and also chose not to testify in his defence and also did not call any witnesses.

In mitigation, Quow told the court that he had joined the Cadet Force at Grammar School as the Family Court had ordered after he was convicted, as a minor, for theft but had remained enrolled only for “a couple months”.

He said that he had left Bethel High School at Form 1 and now works as a labourer and lives with his father in Chauncey.

The chief magistrate said that the particulars of the offence are “quite frightening”, noting the time when it occurred and the ages of the complainant and witnesses.

“Why shouldn’t I send you to prison?” she asked the defendant, who asked the court to place him on a bond and impose a curfew.

“The complainant was scared, as he ought to be. The other witness was scared. He started to walk fast then skip to get home,” she said, adding that the 13-year-old was also scared.

Nothing but a prison sentence — prosecutor

In his submission on sentencing, the prosecutor said that Quow was fortunate that he was not charged with possession of an unlicensed firearm.

The prosecutor noted the age of the complainant and what Quow told him during the assault.

“… even the evidence of the VC when he said I was scared but I laugh. And it was spoken words that he said to him. ‘You can’t talk now? You nah bad now?’” Cato said.

“Look at his stature as relates to this one,” Cato said, referring to Quow and the VC.

“He doesn’t need a gun to go to him to ask him if he can’t talk. He is a big man. He is 21. To actually follow him in the direction of his home and approach him and put a gun to his side,” the prosecution said, adding that the court should have “zero tolerance” for this.

“You cannot allow persons — although he was not charged with possession — to have firearms and using them as if they are legal, especially on our youths.”

The prosecutor said the court should consider nothing but a custodial sentence “ based on the age of the VC, the time of the day, and the method used to assault the VC.

“In the cross examination, at no time did he say I was not there,” Cato said.

He further spoke of the reason for the assault, adding that the VC and some other friend had got into an altercation and that Quow spoke to the VC about it on the night of the assault.

“That done. How gun come in?” Cato said.

Gun used ‘to be aggressive, assertive and cause intimidation’

In handing down her sentence, the chief magistrate said that she shared the prosecutor’s sentiment.

“I would have been just as concerned if you were the VC and someone has done that to you,” she told Quow.

She said that the firearm was shown in effort to be aggressive, assertive and cause intimidation. Further, it was    carried near a place of worship — aggravating factors in the case.

Browne also noted the age difference between the defendant and the complainant and the other witnesses.

She further said that the court considered it aggravating that after the incident Quow inquired about whether the VC had made a report to the police.

“What was the purpose of these inquiries?” she said and added a further two month to the starting sentence of one year and three months.

She said that aggravating for Quow as an offender were his two previous convictions, albeit not of a similar nature.

“The only thing going for him is that he is young, still in the stage of risk-taking and not making serious decisions,” she said.

The magistrate ordered that the 34 days Quow spent on remand be discounted from his sentence and informed him of his right to appeal.