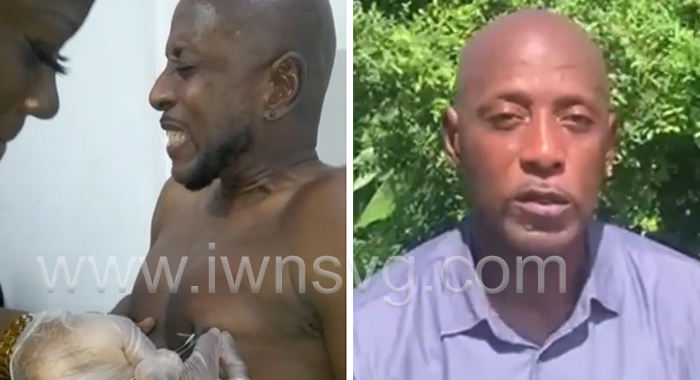 MP for East Kingstown, Dwight Fitzgerald Bramble in the body piercing video, left, and in the video in which he apologised on Sunday, Sept. 4, 2022.

MP for East Kingstown Dwight Fitzgerald Bramble, on Sunday, apologised for using profanity in a video of him receiving a piercing to his chest two years ago.

Bramble, who is into his first term as a parliamentary representative, said he thought deeply about whether he should respond to the video, which began circulating on social media on Friday.

In a video published on Facebook on Sunday afternoon, Bramble said that while the piercing was a private matter, he thought it important to “to break that pattern of lack of accountability” by some parliamentarians.

He said that since the video emerged, there were “feeble attempts to scandalise my name for an action carried out in what I thought, frankly, was within the freedom and sanctity of my privacy and which is a personal choice which does not offend or violate anyone”.

The former diplomat said he did not know that the procedure was recorded or that it was posted to social media, until he, “like the rest of the public, saw it there.

“I would never, ever sanction something like that. And while my private and personal choice of obtaining a body piercing is not wrong or illegal, I thought it necessary to come to you to break that pattern of lack of accountability by some of our politicians and address this matter directly.”

Bramble, a former national goalkeeper, who is known to wear earrings, said he has other body piercings and tattoos for years, even before becoming a parliamentary representative.

He said it is something that “our African forefathers have done with pride throughout our history, for various reasons, including depicting strength and virility.

“I have to admit, however, that the piercing in the video was a lot more painful than I anticipated, which resulted in my reaction with very regrettable profanity.

“I wish here to sincerely apologise to everyone who was offended by the use of such profanity. The use of such language does not reflect my true character,” Bramble said.

“I am human first but my commitment to serve you the people of St. Vincent and the Grenadines does not change and will never be shaken.”

He said he would defend and fight for the rights of and a better quality of life for all Vincentians.

“I am serious about this commitment as exemplified by my numerous community-building initiatives over the years. I have to say though, it is disheartening and shameful that malicious elements would attempt to use this video to distract from the real issues at hand.”

Bramble, an economist, spoke of the high and unbearable cost of living, which he said, is plaguing all Vincentians.

“Everything is increasing,” he said, noting the recent increase in bus and taxi fares.

“…  everything is increasing in price except wages and salaries. Mothers and fathers are struggling to send their children back to school as I speak.”

He said that this past week he distributed school supplies to more than 100 children in East Kingstown and wished he could have distributed more.

“Almost half of our population is living on $14 a day or less. That is the reality of the poverty situation in our country. Almost half of our young people are unemployed and they see no hope whatsoever in the policies of this ULP (Unity Labour Party) government.”

He said the incidences of crime and violence are becoming more frightening by the day, adding that one Sunday morning, there was news of another shooting death.

“It is sad that in an era where lack of accountability for millions of dollars by this government gets swept under the rug and we are exerting so much energy, so much energy, on a video which really and truly does not even help to improve our lives.

“Let us focus on the real issues impacting the lives of Vincentians and how we can improve our quality of lives here in our blessed St. Vincent and the Grenadines by working together.”

9 replies on “MP apologises for swearing in body piercing video”