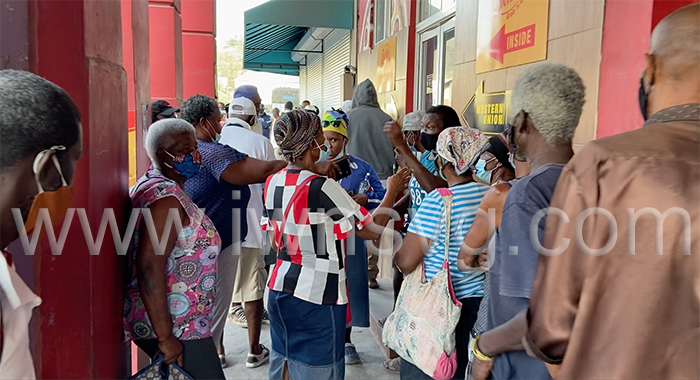 A large crowd outside Western Union in Kingstown in April 2021.

People standing on the sidewalk while waiting for services at money transfer businesses will be a thing of the past when an amendment passed in Parliament last week comes into effect.

Among other things, the Money Services Business (Amendment) Act says that money transfer service must have adequate premises.

“… anyone, parliamentarian or not, who walks around in St. Vincent and the Grenadines will be sensitive to the issue now of adequacy of premises,” Minister of Finance, Camillo Gonsalves said in presenting the amendments to Parliament.

He noted that there are two money transmission companies licensed in St. Vincent and the Grenadines and operating under the supervision of the Financial Services Authority. They are MoneyGram and Western Union.

“And I have observed and I’ve spoken to the FSA and the Ministry of Finance, that during peak periods, you sometimes see some very long lines on the sidewalk of people lining up to collect their remittances … and also to send money,” the minister said.

“… and you’ll see these lines on the sidewalk and you’ll say, ‘Oh, my goodness. There must be a tremendous line inside because it spills out all the way onto the sidewalk.

He said the COVID-19 pandemic has made the situation worse.

He noted that the previous law did not require approval of the place of business of money services entities.

“So there is no current requirement that you have to get approval to put your Western Union or your MoneyGram, inside of Joe’s Rum Shop.”

He, however, said that the trend in the region indicates that regulatory authorities are being asked to approve the place of business for these money service entities and for the explicit requirements of that approval to be stated in law.

“There’re customer service reasons, there’re comfort reasons, there are also security reasons because you don’t want people in situations coming in and out of places that are susceptible to crime,” Gonsalves told Parliament.

He said the amendments include provisions that would require approval by the Financial Services Authority, of the chosen place of business for these entities.

Gonsalves said draft guidelines have been prepared, which would provide guidance on the adequacy of the place of business of these types of institutions.

Meanwhile, in her contribution to the debate, Opposition Senator Shevern John welcomed the amendments.

She said that money transfer is vital to the Vincentian economy, adding that at Christmas time, many people stand in long lines in the sun or rain, awaiting services and even seniors have to wait in line for hours.

“And you keep wondering why it is that these institutions are not making the necessary provision for these people,” John said.