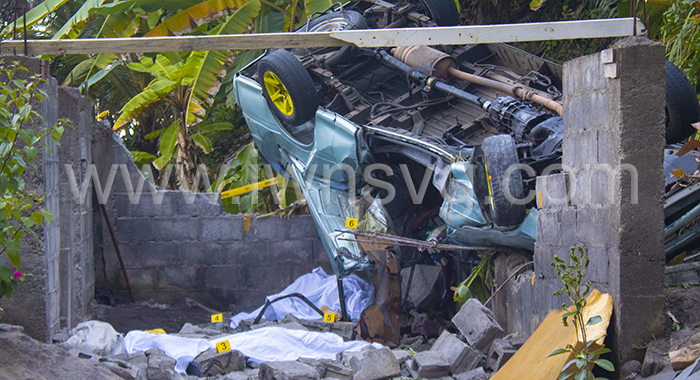 Two imprisoned relatives of the five men who died in the minibus crash in Sandy Bay on Sunday will be released “with appropriate and discreet security” on the day of the funeral.

Prime Minister Ralph Gonsalves said he has taken the decision as minister of national security and chair of the Mercy Committee and thinks it is reasonable in all the circumstances.

Police have launched an investigation into the accident, which occurred around 2:55 p.m., claiming the lives of Giovanni Barker, Ishmael Bruce aka Darrel, Elvis Harold, Khalil Robin, and Kenroy Haywood as they were on their way to a funeral in Owia.

Robin would have turned 30 today (Wednesday) and leaves behind an 8-month-old child. At least two of the other deceased men also have young children.

Speaking on his weekly programme on NBC Radio, on Wednesday, Gonsalves said he spent three hours Tuesday morning visiting the relatives of the deceased as well as the people who were injured in the accident.

He said he wanted to speak publicly about the families’ request to have the imprisoned people released for the funeral.

“There are three persons who are at [His] Majesty’s Prisons related to the families and the families requested — well, in one case, the person is on remand, so that’s an issue of bail and the other two have been sentenced.

“I spoke to the Superintendent of Prisons already about having them out for the day of the funeral because the families request that,” Gonsalves said.

“I think in the circumstances that it is something which is reasonable to accede to and I exercise my discretion as Minister of National Security and, more particularly, the head of the Mercy Committee but the persons would be out … with appropriate and discreet security,” the prime minister said.

“I think it is a reasonable request to accede to and we have to look [out] for this post-traumatic period support life and living not only now; we have to hold hands but afterwards too,” he said, adding that the flags which are flying at half-mast to mark the death of Queen Elizabeth II “will continue to fly at half-mast also for these persons”.

The prime minister said he got in touch with the relevant state authorities, on Sunday, after receiving news of the accident.

“Since that, those involvements have even deepened and widened and that involves Ministry of Health, Ministry of Education, Ministry of Social Development to deal with psychosocial issues and, of course, Ministry of Health, also specific health issues for those who are sent home and those still in the hospital, including one person who was still assessed as critical.”

The government has announced that it would cover the cost of the funerals and the prime minister said there will be a meeting Wednesday afternoon involving state agencies and families regarding the funeral arrangements.

“As you’d expect, I would have touched base with the various state entities which would be involved in that particular exercise,” he said.

Gonsalves said he declined an invitation to visit the Clare Valley Government School during his visit to the community on Tuesday.

“I want the psychosocial work to be done,” he said, adding that he met some of the students at some of the different homes he visited.

“But I always want these things to be done in a proper and orderly manner, where my presence could do good,” he said, adding that he did not visit the community on Monday morning because he wanted to obtain the families’ permission first.

“It’s always wise and mature to allow persons to be with their friends and families immediately.”

Meanwhile, police said preliminary investigation revealed that  the accident occurred when motor vehicle H-8190, a green Toyota van, owned and driven by Napata Louis, of Clare Valley, went over an embankment along the Old Sandy Bay Public Road as it was travelling to Owia.

The vehicle plunged over a 35-foot embankment before landing on its hood, killing four of its passengers on the spot, while a fifth died in hospital.

Several other passengers sustained injuries, including the driver of the omnibus and were all taken to the Georgetown Hospital for medical attention.

The vehicle was extensively damaged.

Among the passengers were two of the driver’s sisters, one of whom lost her boyfriend who is also the father of her child in the crash.

The van was transporting people to Owia to attend the funeral of Rohan “Charla” Rawlins, 43, who was shot and killed in Lowmans Bay on Aug. 15, becoming the country’s 27th homicide victim this year.

In January 2015, seven students died when the bus in which they were travelling careened off the road in Rock Gutter, another area in North Windward, and ended up in the sea. The bodies of two of the students were never recovered.