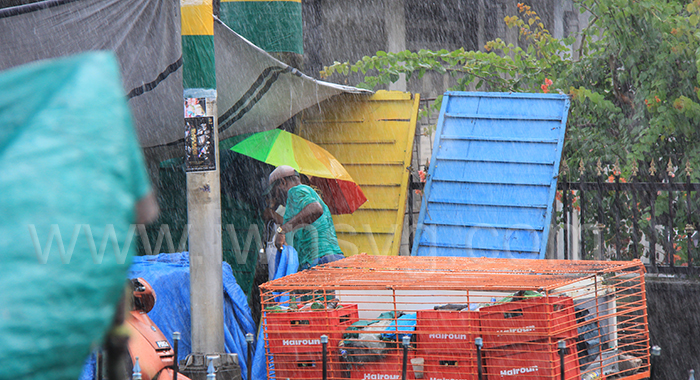 A pedestrian seeks out shelter amidst a heavy downpour in Kingstown on Tuesday, Sept. 20, 2022.

Forecasters said Wednesday that the weather in St. Vincent and the Grenadines will be mostly cloudy and windy with occasional moderate showers and a slight chance of isolated thunderstorms as tropical wave approaches the Windward Islands.

The St. Vincent and the Grenadines Meteorological Services said it continues to monitor the progress of the strong tropical wave.

At 2 a.m. Wednesday, the axis of the tropical wave was located along longitude 57 degrees west, or about 270 miles (430 kilometres) southeast of the Windward Islands and moving westward at 15 – 20 mph.

The latest model guidance suggests that environmental conditions remain favourable for gradual development of the system, and there is a high chance (70%) that a tropical depression could form during the next few days.

Additionally, the model guidance suggests that most of the intense activity associated with the system will pass to the south of SVG on Wednesday into Thursday. However, rainfall accumulations of up to 50 mm (2 inches) with isolated higher amounts are still possible.

A weather advisory for a low risk of flash-flooding remains in effect.

Residents and motorists in areas prone to flash-flood and landslides or near rivers and streams should remain alert.

Wind speeds are likely to be between 20 to 30 mph (35 to 50 km/h) from later Wednesday, with higher gusts possible during shower activity.

A high wind advisory is in effect. Residents are strongly urged to be vigilant against falling tree limbs, loose outdoor objects and disconnected overhead wires.

A marine advisory is also in effect for above-normal sea swells. Small craft operators and sea bathers should exercise caution, especially on the eastern coast.

These alerts will be upgraded to watches/warnings if conditions warrant.