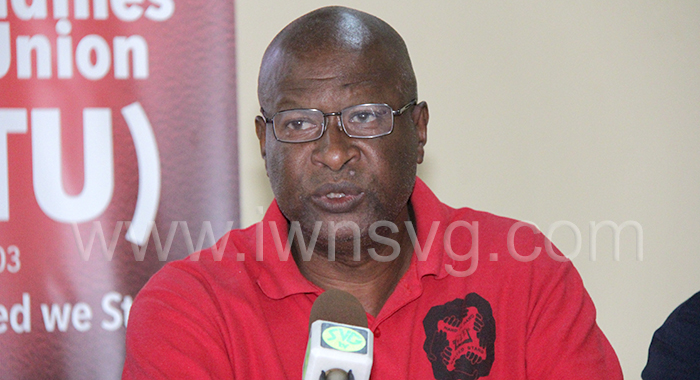 President of the Teachers’ Union Oswald Robinson speaking at the press conference in Kingstown on Tuesday, Sept. 20, 2022.

President of the Teachers’ Union, Oswald Robinson, on Tuesday said it was “a little surprising” to learn that there will be a hearing today (Wednesday) in the case that public sector unions have brought challenging the government’s COVID-19 vaccine mandate.

The trial is slated for Nov. 29 and Dec. 1, but the court has summoned the parties, Robinson said.

“Last week Friday, an application was filed so the judge has called an urgent meeting to deliberate on that,” he told a joint press conference of the Teachers’ Union, Public Service Union and the Police Welfare Association.

Robinson appeared to be unaware of or unwilling to disclose the nature of the application.

“Well, it has to do with judicial review of the same SR&O (Statutory Rule and Order that brought the mandate into effect),” he said.

The media noted to Robinson that the whole case is about judicial review.

“… but there is a claimant whose application went in on Friday, and the judge has called to deliberate on that,” he said.

The union leader said that the applicant is not a new party to the case.

“That is part of the dynamics of this case. Whenever something pops up, then you make some little changes here and there,” he said.

Robinson was asked whether the court has summoned the parties to consider an application by a claimant to adduce a certain type of evidence.

“Well, I don’t know the nature of her application more than we received the request from the judge to appear in court for tomorrow, and it specifically mentioned the name of that claimant,” Robinson said.

He said he had not sought clarification from the union’s legal team.

“I prefer to wait on the outcome of the court matter tomorrow, and then I’ll be in a better position,” he said, adding, “… as I said, I didn’t inquire as to the nitty gritty of the matter.”

Robinson noted the scheduled dates for trial of the matter.

“But it was a little surprising when we saw that notice that there will be a hearing tomorrow. I don’t know if it has to do with case management. Because sometimes these things, as I said, the case is dynamic.”

Robinson said that he received the notice of the hearing on Monday.

He said he did not consult with the union’s legal team about the nature of the court hearing, even though he knew that the union was slated to have a press conference on Tuesday.

“Well, because you don’t want to say things to create any contempt of court. It is always better to remain silent on something that you are not quite knowledgeable about,” he said.

Asked how he could be held in contempt of court when he did not even know what the hearing was about, the union leader said:

“And that is why I will not attempt to say anything because it comes back to the point you are making. You want me to say something that I don’t have the facts about…” Robinson said, and further stated that the press conference was called to discuss the outcome of salary negotiations with the government.

In one of his regular voice notes to union members, Robinson, on Tuesday said there will be “a court hearing on a special application that was made to the court by one of the claimants.

“So, the judge has called an urgent meeting to deal with the matter,” he said.

iWitness News was reliably informed that today’s hearing relates to an application by one of the claimants to adduce expert evidence in the case.