Leacock suggests NDP shifting away from ‘One China’ policy 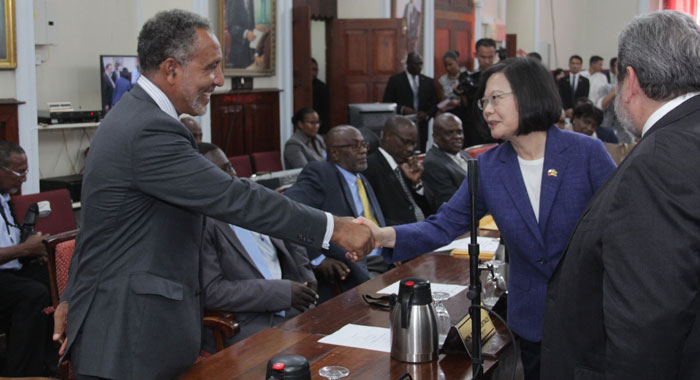 Opposition Leader Godwin Friday, left, shakes hands with President of Taiwan, Tsai Ing-wen after her address to Parliament during an official visit to St. Vincent and the Grenadines on July 16, 2019. Prime Minister Ralph Gonsalves is at left. (iWN photo)

The opposition New Democratic Party (NDP), on Monday, gave the clearest indication yet that it might be reversing its adoption of the ‘One China’ policy, announced by former party leader Arnhim Eustace in 2016.

The One China policy is the acknowledgement by states of China’s position that there is only one China, which includes Taiwan and of which Beijing as its only legitimate representative.

Since 1984, St. Vincent and the Grenadines has maintained diplomatic relations with Taiwan, a self-ruled island of 23 million people, which China has threatened to invade if Taipei declares independence.

On Monday, St. Clair Leacock, an NDP vice-president, who is acting as party leader in the absence of Opposition Leader, Godwin Friday, who is on vacation in Canada, said he called Taiwan’s ambassador to Kingstown, Peter Lan, after a 6.8 earthquake hit southeastern Taiwan, on Sunday

“I spoke this morning (Monday), as I know my colleague vice president Nature (Nigel Stephenson) had done yesterday (Sunday), with his excellency the ambassador to express our regret at their experience…” Leacock said.

He said that the diplomat assured him that most of the Vincentian students in Taiwan are not in the areas where the earthquake was “most heavily felt.

“He can guarantee that none of our students have been endangered or damaged in any way,” said Leacock, who is into a third consecutive five-year term as MP for Central Kingstown.

“Be that as it may, we, as a political party, would not be insensitive or unmindful of the fact that a fair number of cohorts of students over the years have gone on to Taiwan for further education, something for which we wish them well, we wish that that continue for a long time,” Leacock said.

“And in our gratitude for the exposure, the education that our students are receiving abroad, we did indicate to the ambassador that we regret any loss of life or limb…”

The opposition lawmaker said there is “no dispute” that the relationship between Taipei and Kingstown “for the main part, has been for the good of St. Vincent and the Grenadines in several ways.

“So that this morning we identify with them, their national disaster challenge and we know for a fact the efficiency and the efficacy of their government and people of Taiwan, they would be back on their feet very quickly and they will take all of the necessary steps and procedures to ensure not just that their own people are looked after but all foreign students, in particular, from St. Vincent and the Grenadines get the best of Taiwanese assistance and that assurance was given to me by the ambassador this morning.”

After becoming leader of the NDP in 2017, Friday restated his support for the One China policy and led a delegation on a visit to China in 2018, where they held talks with officials of the China Zhi Gong Party.

However, the NDP has been largely silent or evasive on the issue since.