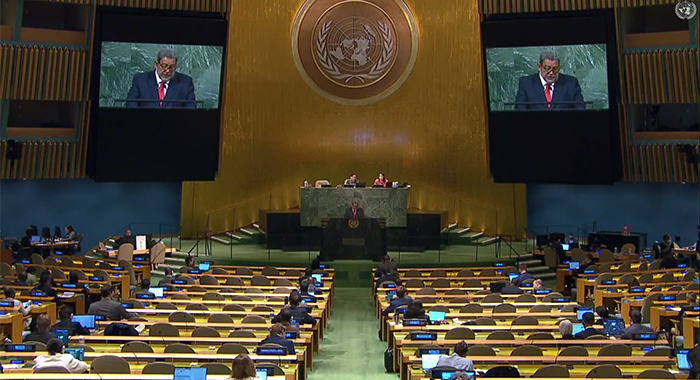 UNITED Nations (CMC) —  Prime Minister Ralph Gonsalves, on Saturday, told the United Nations that St. Vincent and the Grenadines has had to face immense challenges since March 2020.

In March 2020, he said, the COVID-19 pandemic arrived “like the proverbial thief in the night.

“Although we did not close our country down, not even in the darkest days of the pandemic, much of the world locked down on us,” he said. “Life, living, and production were, and still are, badly affected.”

In April 2021, Gonsalves said, his small country suffered 32 volcanic eruptions, which caused widespread destruction of property, immense social dislocation, “immiseration of our people”, and the evacuation of one-fifth of the population into emergency shelters.

He noted that in early July 2021 Hurricane Elsa struck, resulting in further loss and damage, and, in late February 2022, open hostilities between Russia and Ukraine erupted, “which exacerbated the economic turmoil which was already brewing, globally.

“The knock-on effects of the Russia-Ukraine war has been terrible for faraway St. Vincent and the Grenadines, and our Caribbean,” Gonsalves said, stating that prices of basic commodities, such as imported fuel, food, fertiliser, and hand tools, have “gone through the roof”.

“Still, we are a resilient people; we are not a people of lamentations; and we are recovering and embracing fresh hope,” he added.

“We in St. Vincent and the Grenadines are working hard and smart, but without a fair and just economic order globally, an especial regard for ‘small island exceptionalism’, a global architecture of enlightened multilateralism, and internationalist solidarity, our herculean national efforts are unlikely to yield the requisite abundant fruit.  Trying to go up a fast-moving down-escalator is a challenging exercise.”

“Just let St. Vincent and the Grenadines and other developing countries succeed,” he urged, expressing his “profound gratitude for the regional, hemispheric, and international solidarity accorded it at its time of real peril during, and immediately after, the series of volcanic eruptions last year.”

Gonsalves, however, said that “episodic support must metamorphose into structured, ongoing solidarity if small island developing states (SIDS) are to survive and thrive in this increasingly hostile world in which the metaphoric elephants trample with very little regard for the proverbial ants who make up much of humanity and are vital to the well-being of our global civilisation’s landscape and seascape.”

He said the agenda for SIDS is well-known, stating that some major planks in it are: concerted global action on climate change, inclusive of a sufficiency of resources for adaptation and mitigation measures; availability of optimal financing for development, including the roll-out of a multi-dimensional vulnerability index and a compensation mechanism for loss and damage; an especial and meaningful carve out for SIDS in international trading arrangements; the cessation of the unacceptable weaponising of the financial system; an appropriate reformation of the United Nations to reflect the interests of SIDS; and efficacious implementation of the 17 Sustainable Development Goals, particularly in relation to eliminating hunger, poverty, and inequality.

Prime Minister Gonsalves said of especial concern, too, for the Caribbean is “the urgent issue of reparations from the European states for their commission of native genocide and the enslavement of Africans that has caused painful legacies of underdevelopment.

“Time has surely now come for this issue to be addressed urgently,” he said. “Reparations is a just and juridically-grounded demand; it ought not to evoke confrontation, but support.”

He said CARICOM, to which Haiti belongs, is “pained at Haiti’s circumstances and the relative neglect by the international community of this nation of inestimable value.

“Together, we must do better with, and for, Haiti in concert with the Haitian people, based on their own home-grown solutions, and led by them,” Gonsalves said, stating that SVG has been actively engaged on this issue within both CARICOM and the United Nations.

In the Caribbean, beyond the Haitian issue, Gonsalves said national and regional efforts are stymied by the “unfairness and relative unresponsiveness of the global political economy”.

“Oft-times, too, the unintended consequences of the actions by the centres of imperialism or hegemonic forces induce suffering, or hold back our progress,” he said.

For example, the prime minister said the Caribbean has had its correspondent banking arrangements compromised or withdrawn by the application of rules which their governments have had little or no role in making.

Similarly, he noted that “black lists” or sanctions are imposed or threatened by “faceless bureaucrats in imperial centres, for this or that matter, without any regard for multilateral rule-making or settled international law”.

“Meanwhile, interference in the internal affairs of our nations persists through external state agencies or private entities of imperialist or hegemonic centres bent on imposing their wills to their advantage,” he said. “Oft-times their relentless misuse and abuse of the modern means of information technology with falsehoods and misrepresentations galore have the effect of polluting democratic discourse and undermining democracy itself.  The United Nations must address this issue urgently!”

At the same time, the Vincentian leader said the United Nations, too, must reform itself “to do its work better.”

In this regard, he said the reform of the Security Council “ought not to be delayed any further.

“Many sensible ideas for reform are on the table,” Gonsalves said. “Let us get on with it and not make perfection the enemy of the good.”