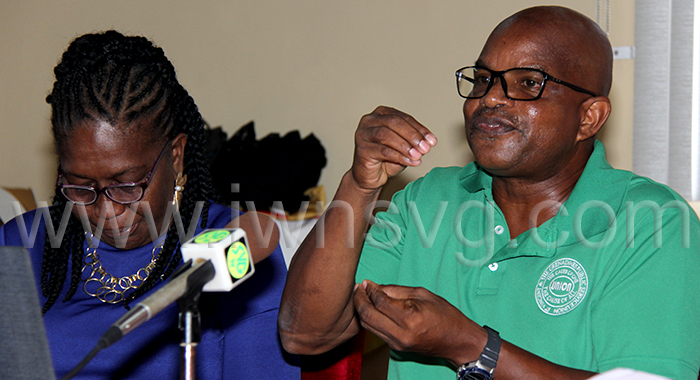 President of the Public Service Union, Elroy Boucher, right, at the press conference in Kingstown on Sept. 19, 2022. The union’s 1st Vice President, Gweneth Baptiste-Stoddard, is at left.

A trade union leader wants to make it clear that the proposal that resulted in a 7% salary increase for public sector workers was the work of the Public Service Union, Teachers’ Union and the Police Welfare Association.

“I also want to stress that what was negotiated is what was put forward by these three organisations,” PSU president, Elroy Boucher told a joint press conference of the unions in Kingstown on Tuesday.

“There is a listing of other organisations present. But there has been no submission from those organisations,” he said.

“So when we submitted a negotiating team, there was a team that comprised the three organisations. And we included, I think, Burns Bonadie because Burns, from time to time, will tend to wear his trade union hat, which works to the benefit of workers from time to time…” Boucher said.

During the negotiations, Boucher was overseas on union business and the PSU was represented by its 1st Vice President, Gweneth Baptiste-Stoddard and Internal Auditor, Kejo Peters.

“Interestingly, and you will note that in St. Vincent and the Grenadines, whenever we stand together in solidarity, it is, again, the three organisations. We do not get solidarity support from any of the other organisations. And I say that without water in my mouth because that’s a fact,” Boucher said, using a colloquial expression meaning to speak frankly.

Boucher noted that the PSU represents the majority of nurses, which constitute the largest section of the union’s membership.

To illustrate, Boucher said that public sector workers, including nurses, police officers, teachers and public servants were fired last year because of the government’s vaccine mandate.

“We are involved in a court matter that is costing over $100,000 and can go beyond that. We approached the Nurses Association executive to get on board and got no response,” Boucher said.

“But nurses were fired. In fact, it is alleged that the executive … said to the prime minister that they saw no difficulty, nothing wrong with the vaccine mandate.

“So it shows that, you know, we are miles apart as organisations representing workers,” Boucher said.

“I don’t want to make that quite clear. Because when you probably look at this and see that, ‘Oh, well, NWM, CTAWU … no they are not on board.

“They are riding on the backs of the three organisations, who are fighting tooth and nail for the advancement of workers in this country.”

Boucher said it is time that trade unions and workers’ associations “recognise what their duty is, come together and stand in solidarity with each other.

“… It happens across the region, except in St. Vincent, for whatever reasons, I don’t know. So I just want to make that point.”