Work on N. Windward Bailey bridges to be reviewed after recent rains 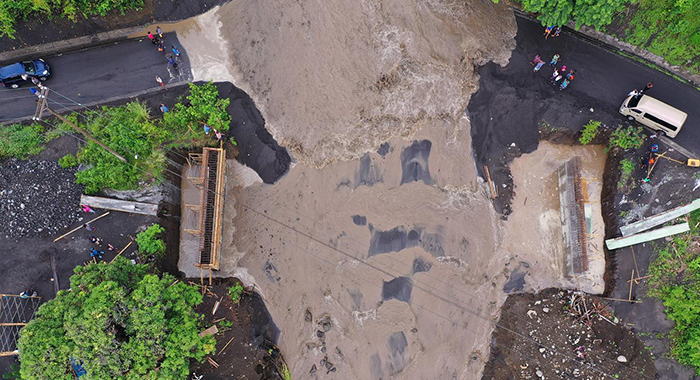 A Richard Robertson/Facebook photo showing the Overland River in flood and the abutments for the Bailey bridges on Sept. 17, 2022.

The abutments built for the two Bailey bridges to be erected in North Windward will be assessed as a result of the recent heavy rains.

The government said that the preliminary observations show that the height of one of the bridges will have to be increased.

“… the rainfall last weekend really gave its first baptism to the present foundations that are now being built for the Bailey bridges,” acting Prime Minister Montgomery Daniel told a press conference on Thursday.

He said that when he was travelling in the prime minister’s official vehicle, he asked the driver to stop in the “swale” at Noel River, which had already been cleared of the debris.

“… the vehicle was level with the sediments that came down after the excavation was done,” he said, referring to the 2019 Toyota Prado SUV in which the prime minister travels.

“That, in itself, tells you the volume of material that came down in the river. And when you look eastward to the river itself, on the bottom side where the abutments are being placed, the sand was level with the top of the abutment,” Daniel said.

He said that if the Bailey bridge were already in place, “the bottom of that bridge would have been seriously impacted by water coming down.

“And so, the assessment that was to be done by the office of the chief engineer equally applies to ensuring that there can be further elevation of the abutment to ensure that there is far more space that you can have the water and sediments in a time like this when we have so much heavy rains that the passage can be much clearer for the water and sediments to go through,” Daniel said.

Meanwhile, speaking at the same press conference, Minister of Finance Camillo Gonsalves said that the construction of the bridges falls within the ambit of the Volcano Eruption Emergency Project (VEEP), which is run by his ministry.

“And on the basis of Minister Daniel’s observation … I asked the VEEP team and the engineers to reassess the adequacy of the abutments related to their heights because if it is that we are building something that could get washed away we may need to go higher and that would require some additional engineering,” Gonsalves said.

He said any changes may slow down the construction of the bridges “but it makes sense, obviously, to get it right the first time”.

A Bailey bridge is also being constructed at Overland and Gonsalves said that the height of the abutments there seem to be in order, but that, too, will be reevaluated by the engineers.

2 replies on “Work on N. Windward Bailey bridges to be reviewed after recent rains”