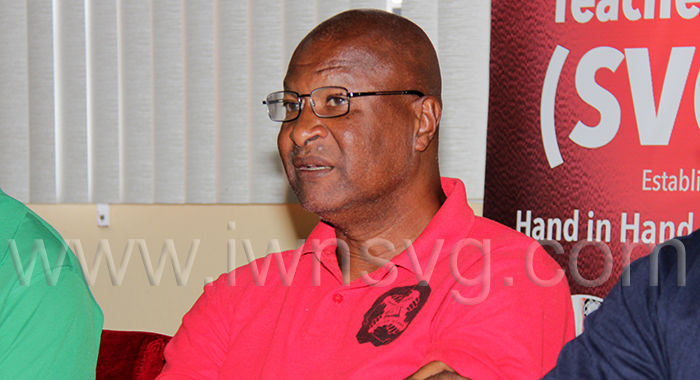 President of SVG Teachers’ Union, Oswald Robinson speaking at the press conference in Kingstown on Sept. 20, 2022.

At least 212 teachers lost their jobs when the mandate came into full effect last December.

The mandate came less than six months before secondary school students began to take the exams at the end of a two-year syllabi interrupted by the pandemic and the April 2021 eruption of La Soufriere volcano.

“Well, for example, … in one particular school — and this is a school where you don’t really have the cream of the crop and it is a very typical example — … you have in a particular subject area, it was just 100%. And now, … the school, in general, only performed just 34%. Last year, it was at 81.1%,” President of the Teachers’ Union, Oswald Robinson told a press conference in Kingstown last week.

“… in another subject area, you had 100%, 100%, 100% [in previous years] and this year, it went down to just about 50%. I know another rural secondary school that was 80%. And now it’s just 50%. And those were the schools that were affected directly; a number of teachers from those schools are not there,” Robinson said.

“We know for a fact that the issue of quality teachers in the classroom is a very important factor,” the union leader said.

He said most of the teachers who were fired were “teacher-trained, qualified, specialised in particular subject areas.

“When we saw the performance of these teachers over the years, in previous years, people were getting 100%. And you fired these people then you … could only find seven trained, qualified persons to replace 212.

“… we saw that the Ministry of Education advertised in March of this year, just on the eve of CXC, they advertised eight schools needing [teachers in] 12 subject areas. And other rural schools advertised vacancies just after CXC finished. So, you’re wondering what was happening all the time,” Robinson said.

He said there were stories of students reaching out to the teachers who were dismissed, “telling them what they’re experiencing now there’s a shift in who is teaching them.

“So, the indicators are there to see that the performance of the students in this year’s results has a direct relationship with the quality of teaching that the students experience,” the union leader further stated.

Robinson was speaking two days before Minister of Education Curtis King would say disruptions in students’ education resulting from the COVID-19 and the eruption of La Soufriere volcano as well as the challenges of e-learning affected students’ preparation for the exams.

The minister also spoke of “the disruption in some cases, where some students lost some of their teachers”.

However, Robinson said there were some issues with the internet, “but the majority of schools went back full swing”, referring to face-to-face education.

He said there are “many schools” that have a shortage of teachers.

“The teachers in the classroom, they are stressed because their colleagues are not there to share the workload that teachers were teaching with five and six subject areas. So, it’s a serious problem.

“And when the government said they’re going to replace 212 teachers, this time around with 40 relief teachers, if you are relief, then it means that you’re grossly underpaid. So, it seems as if they’re going for cheap labour. We continue to appeal for adequate, qualified teachers in the classroom.”

However, the education minister has suggested that the 2022 results should be compared with that of 2019, as it is the first time since then that students are writing two papers.

As a result of the pandemic and the volcanic eruptions, students in SVG wrote only multiple-choice exams for CSEC in 2020 and 2021.

He said the situation raises concerns about students’ dream of enrolling at Community College if they don’t have the required number of passes.

“And even those that get 100%, you’re seeing, generally, that the scale, the performance is still really below the standard.”

He said that most of the schools in which students performed well had all their teachers.

“I saw some schools where they had no entries. One particular school, I saw five subjects here and no entries at all because there was no teacher.

“Well, if you have teachers now who can’t really deliver in an efficient manner, you must have that impact,” Robinson said, referring to the return of essays to the exams.

“Because, for example, even the SBAs, when we questioned the teachers who were dismissed, most of them said  some of the work was completed. Others said, some are partially completed but who took over, didn’t really have the skill set to complete,” he said.

The union leader said that the Ministry of Education should have a database of all SBAs because they have to be submitted online and in hardcopy.

The union leader said that the union’s position was not an emotional one, but based on facts.

He said that the statistical digest gives the data of educational outcomes over the years, including dropout rate and other analyses by gender.

Meanwhile, speaking at the same press conference, Elroy Boucher, president of the Public Service Union said that looking at the CSEC results, “you realise something. It’s not rocket science.

“But 2021, the latter part of that when students are doing final preparation for CSEC, you have a vaccine mandate, and the pass rate has decreased by some 17 or 18 [percentage points] down to 65.55%,” Boucher said.

He said there is “a direct correlation” between the pass rate and the vaccine mandate.

“The government, in my view, based on what I have deduced as the correlation that exists, have contributed to this. There really was the need for it. They have to take responsibility. It lies at their feet,” Boucher said.

“Parents whose children have suffered, the anguish that has been felt by parents looking at these results, it’s only one body of people who are responsible for it: not teachers; it is the government, it is the cabinet that currently manages St. Vincent and the Grenadines.

“They are responsible. The hopes that children had to aspire with respect to their education, to their careers, this has impacted. This is what has created it. Soufriere didn’t do it, COVID didn’t do it — in COVID as directly. The vaccine mandate did it.”