After mulling over options, court decides not to send defendant for psychiatric evaluation 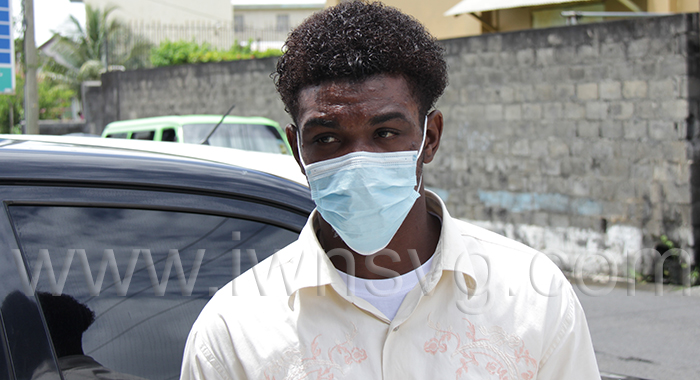 Senior Magistrate Rickie Burnett says he feels as if he failed a man brought to court after he brandished a pair of scissors at a woman who refused to give him her telephone number.

“I feel I have just failed him because I sent him away and I don’t think his problem has been solved,” Burnett said after imposing a one-year bond on the man, Chad Stapleton, 21.

The magistrate and prosecutors Station Sergeant of Police Renrick Cato and acting Corporal of Police Corlene Samuel had concerns about Stapleton’s mental health.

Further, Stapleton told the court that fellow residents of Campden Park have said that he is “crazy”.

But, ultimately, after weighing the options, Burnett decided not to send Stapleton for a psychiatric evaluation.

There was no police officer from Stapleton’s district to inform the court about his reputation or in his community.

Further, in arriving at his decision, the senior magistrate factored in the stigma attached to hospitalisation at the Mental Health Centre, and concern for the security of the man’s home during any such hospitalisation as he could have ended up staying there longer than the court intended, while awaiting an evaluation.

Stapleton pleaded guilty at the Kingstown Magistrate’s Court to a charge that on Sept. 21, at McKies Hill, without lawful excuse in a public place, the McKies Hill Public Road, he had in his possession an offensive weapon, to wit a pair of scissors.

Stapleton had initially pleaded not guilty to the charge when he was arraigned and the magistrate gave him a December date for a trial.

‘People does say me crazy’

However, Samuel asked why Stapleton looked so unsure and questioned whether he understood the difference between a guilty and not guilty plea.

As the magistrate explained the charge, Stapleton told the court that he had scissors with him for his “protection”.

“People does say me crazy,” he told the court.

In response to questions by the court, he gave his age and address and told the court that he lives alone.

When asked about his employment statement, Stapleton gave answers that suggested that he was working in McKies Hill, but when questioned further, it became clear that he meant he had planned to go to McKies hill to look for a job. He said he was going to go “when I done thing the girl”.

In the Vincentian vernacular, “thing” is both a noun and a verb, and, as a verb, is a multipurpose replacement for a wide variety of verbs.

Stapleton told the court that people say he is crazy “because ah how me does move”.

The defendant further said he attended the Emmanuel High School but quit in form 3 and that his mother lives in England and sends “plenty money” for him.

Before the facts of the matter were read, Stapleton told the court that he had approached the girl in McKies Hill because she looked good from afar.

He said he had approached a girl in Campden Park and she went home and told her daddy and her brother threatened to chop him up.

At this point, the prosecutor told the court that the matter that led to Stapleton’s arrest was similar to the other alleged incident that he was telling the court.

The magistrate further said that he had his concerns, adding that he did not think that Stapleton’s mother sends “plenty” of money for him.

“Yeah. Pounds,” Stapleton said, adding, “Fifty, and a hundred sometime. Sometimes, she go cut it down.”

The court was able to determine that Stapleton has a brother, and noted that his cousin, an aviation security officer, had signed his bail bond for station bail.

“We need to check him out because he is saying some things,” the magistrate said and stood the matter down.

When the matter was recalled, the court heard that the prosecution was unable to reach any of Stapleton’s relatives or his surety.

The magistrate then decided to accept the guilty plea.

According to the facts presented by the prosecution, about 11:45 a.m. last Wednesday, Lindika Sterling, 24, was on her way home when Stapleton tried to get her attention in the area of Girls’ High School.

Sterling paid him no mind and Stapleton persisted and asked her for her telephone number. The woman responded, telling him that he might have succeeded had his approach been better.

Stapleton persisted yet and Sterling took out her cell phone and began to record the interaction.

He then pulled out a pair of green handle scissors from his pocket and Sterling stopped recording.

Stapleton then ran away.

Sterling reported the matter to the police and PC 11 Patterson investigated, leading to the charge being brought against Stapleton.

Stapleton gave a statement admitting to the offence.

When asked to explain his actions, Stapleton told the court that he wanted the woman to be his girlfriend although it was the first time he was seeing her and that he saw her from behind, even as she was wearing a hat.

Stapleton told the court that he took out the scissors because the woman took out her phone.

“If you want to lime a woman, where you going with scissors?” Burnett said.

He said that Stapleton must have done certain things over a period of time for the residents of Campden Park to conclude that he was “crazy”.

“The act that you did that afternoon, your behaviour to her was not normal. If a man wants to lime (date) a woman, that is not how he behaves; unless I am old fashioned,” Burnett said.

“That is not normal, rational behaviour. You use more words, not a weapon.

He said he could dispose of the matter easily and treat it like any other case “but I am of the view that you have something deeper in you. You have a problem. It must be that the residents of Campden Park they are seeing something,” the magistrate said.

“I am not trained to solve every problem that comes before the court but whatever is going on in his mind has to be resolved somehow. If not, he might be back in court.”

The magistrate said he was minded to impose a bond, but said he was not sure that would take care of the problem.

He asked Samuel if she had any recommendation, saying that he hates to send people for evaluation like that.

Samuel said she was also of that opinion.

Burnett said that getting a social inquiry report might be a way of getting around sending Stapleton to the Mental Health Centre for evaluation.

“If an inquiry is done and there is information about certain things he could be send for an evaluation,” the chief magistrate said.

Samuel said because of the manner in which Stapleton approached the virtual complainant, she took her cell phone, adding that the complainant said she was scared.

“She been look good from far from behind,” Stapleton said, gesturing at the waist section.

“Me try shoot me shot,” he further stated, meaning attempting to make a pass at the woman. Stapleton said that when the complainant took out her phone, he told her to give it to him “to see what’s going on”.

The magistrate said he did not want to institutionalise Stapleton for an inquiry to be done.

“But he needs some help. He has said enough for me to think he is not quite with us… And if I don’t try to help him or save him, I am going to send him out to do other things.”

‘better to be safe than sorry’ — Cato

Meanwhile, the magistrate asked Cato, who prosecutes at the Serious Offences Court, but was in the public gallery at the Kingstown Magistrate’s Court on Monday, for his opinion.

“There is an old saying, it’s better to be safe than sorry,” Cato said.

“I am of the view that he should be sent for observation. If after observation they say he is fit to go back in the society, so be it. They are the professionals. Just by listening to him and just by the scenario–” Cato said.

“Unfortunately, there is a stigma attached to mental health centre…” Burnett commented. “I am trying to get around that but I don’t think I can.”

The magistrate further noted that Stapleton said he lives alone.

Burnett added that there is a security concern regarding his home if he is sent for evaluation.

“Me does go through a lot sometimes,” the defendant told the court.

But Cato noted that Stapleton has a brother and someone also signed his bail bond.

The magistrate said he wanted Stapleton to be evaluated but he also wanted his property to be secured.

“He lives alone and the country is small.”

Cato told the court that he had observed the way in which Stapleton was looking at the female officer who investigated the matter.

He said that he thought that they knew each other, but when he inquired, he realised that she is a police officer and the investigator.

The magistrate considered ordering an evaluation within seven days but said it would not be ready and Stapleton could end up being at the Mental Health Centre for a while, having been sent there on court orders.

Court settles on a bond

“After balancing and evaluating everything, I might just place him on a bond and send him home because I have to assess the alternatives as well,” Burnett said.

He bonded Stapleton in the sum of EC$1,500 for one year. If he breaches the bond, he must pay the amount forthwith or go to prison for three months.

The magistrate noted that when Stapleton was saying he quit school in form three, he counted and extended three fingers.

The defendant said he was doing that because he was ashamed and did not want people to hear.

“I have to say it out loud because I am not taking secrets,” Burnett said. “This is a courtroom. It is not a private event that I am having and you are not the first person who dropped out of school in Form 3.”

The magistrate told the defendant to “take comfort” in knowing that the majority of people who come before him are secondary school dropouts.

“Ninety-nine per cent of them. You are not alone,” Burnett said.

The magistrate told Stapleton that he has to complete his education and suggested that the defendant go to evening classes and write some subjects.

The defendant told the court that he would tell his mother about it.

Burnett encouraged Stapleton “to stay on the right path and do the right thing because you could end up in prison”.