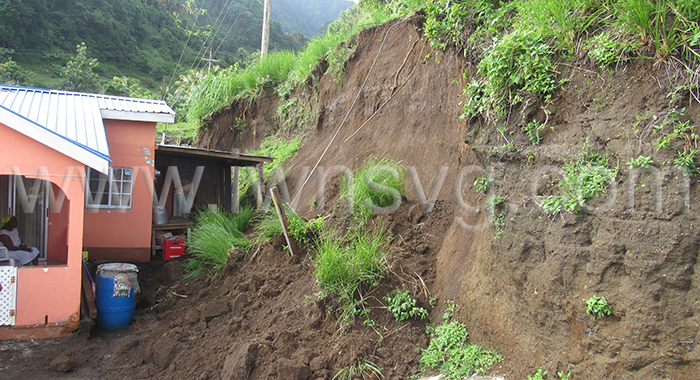 A Fancy resident is appealing to the relevant authorities for “urgent attention” as three landslides affected her home within days.

“It’s kind of scary. Whenever it comes down, it gives you a scare,” Elna Michael told iWitness News on Saturday, adding that there were similar landslides in the area in 2013, 2016, and 2019.

Michael said that on Thursday night a landslide occurred along the main road at the back of her house.

The embankment is supported by vetiver grass, commonly known as “old man beard”.

Michael said the erosion is “eating back” the main road and the landslides are getting closer and closer to the road.

She said she was awakened by her son when the first of two erosions occurred at about 4 a.m. on Saturday, with both earth movements occurring soon after each other after the heavy rains overnight.

Debris and water entered Michael’s kitchen and other items were overturned and covered with soil from the erosion.

The water meter was displaced from the original spot and while it was intact Saturday morning, the pipe broke Saturday afternoon, making the situation worse.

Michael said she and other residents of the community replanted vetiver grass to the back of her house after the landslide on Thursday.

“This needs urgent attention. Something needs to be done. I reported to BRAGSA (Roads, Buildings and General Services Authority) and NEMO (National Emergency Management Organisation) in 2013, 2016, 2019 and they said a retaining wall is necessary but since 2013 to now, nothing has been done.

There have been consistently heavy rains in Fancy over the last few days, resulting in the rivers in the community overflowing their banks.

One reply on “Fancy resident appeals for ‘urgent attention’ after landslides”