Taiwan’s participation in WHO, ICAO would make world safer — diplomat 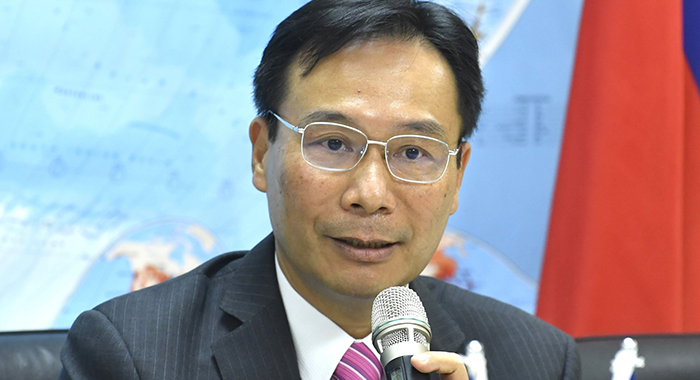 Taiwan’s ambassador to St. Vincent and the Grenadines, Peter Sha-Li Lan says that Taipei should be allowed to participate in specialised agencies of the United Nations, such as the World Health Organization (WHO) and the International Civil Aviation Organization (ICAO).

He told iWitness News, on Friday, that China and Taiwan are not going to solve their biggest and fundamental political issue all at once.

“But letting us participate in those specialised agencies, especially those very important ones — civil aviation and public health, UNFCCC (United Nations Framework Convention on Climate Change) — … we think by choosing those important global issues in which we’re able to contribute immediately, we are actually benefiting everybody as a whole,” Lan said.

China has blocked Taiwan’s participation in UN agencies and many other international organisations amidst the unsettled political dispute across the Taiwan Strait.

Lan rebutted the People’s Republic of China’s (PRC) argument that UN Resolution 2758 makes Beijing the sole representative of China at the United Nations and therefore, prohibits the participation of the Republic of China (Taiwan) in the UN or its specialised agencies.

On Oct. 25, 1971, the UN General Assembly passed UN Resolution 2758, which stated that the PRC is the only legitimate government of China. The resolution replaced the ROC with the PRC as a permanent member of the Security Council in the UN.

Lan said, “But the truth is, if you review the document of that resolution, that resolution was a debate or discussion on who gets the seat of China, this member of China, in the UN. So, the decision was made for PRC to come in and replace ROC on that seat. And that’s it.

While China claims to represent Taiwan internationally, Lan said that the PRC has never governed Taiwan.

“That is another myth created by Chinese propaganda,” he said, noting that visitors to Taiwan have to obtain a visa issued by a Taiwan embassy.

“We have our own currency; we elect our own president. All the residents in Taiwan pay taxes to our government. When the Chinese citizens want to visit Taiwan, they also have to obtain documents from the Taiwan government,” Lan told iWitness News.

“So, if you look back and check the facts, there was not one single day in the history that Taiwan was ruled by the PRC government. So, the argument of saying that we are part of them, and we were always part of them is just another myth or disinformation.”

He said that Taiwan’s participation in ICAO is important, noting that in 2021, Taiwan’s Taoyuan International Airport was identified as the fourth busiest airport in terms of air cargo.

“Before COVID-19, we had over 72 million travellers making transits or visits to Taiwan,” he said, adding that because of Taiwan’s geographic location “in the middle of Japan, Korea, China, Southeast Asia, naturally, it’s a regional hub”.

“… you leave this partner out, you are not going to have a complete structure in terms of civil aviation. So, you’ve got to somehow find a way to let Taiwan contribute and connect. So, it will benefit the rest of the world,” the diplomat said.

“The same thing goes with WHO,” he said, adding that Taiwan did a “fine job” during the COVID-19 pandemic

He said that many travellers transit in Taiwan on their way to neighbouring countries, including China.

“If the WHO did not pass any information, in terms of a united strategy against COVID, you are leaving a serious hole for the rest of the partners,” Lan said.

He told iWitness News that Taiwan understands “the serious international politics there, but for those specialised agencies in the UN, we believe we already are a very important stakeholder who stand ready to contribute”.

The diplomat reiterated that the UN resolution did not touch on Taiwan, adding, “But unfortunately, through the continuous propaganda of China, a lot of people just blindly believe that resolution already gave them the ground of so-called one China principle, which means we are part of them. These are all false or disinformation.”

Lan said this is “one very important message we want our international friends to know”.