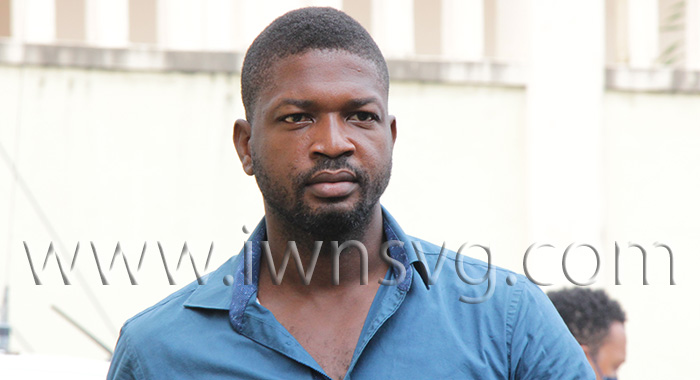 The accused, Euwen Grant arrives at the Serious Offences Court on Monday, Oct. 3, 2022.

A 29-year-old police officer with nine years’ service has been charged with assault occasioning actual bodily harm and aggravated burglary.

Euwen Grant, of Colonarie and Layou, was not required to plead to the indictable charges when he appeared before Chief Magistrate Rechanne Browne at the Serious Offences Court, on Monday.

He was charged that on Aug. 21, 2020, at Byera, he entered the dwelling house of Josephine Cox, of Byera as a trespasser and at the time had with him a weapon of offences, to wit a knife.

He was further charged that on the same date and place, he assaulted Jamron Cox, of Byrea, causing actual bodily harm.

The chief magistrate granted bail in the sum of EC$8,000 with one surety and ordered Grant to have no contact with the virtual complainant.

She ordered him to report to Layou Police Station on Fridays between 6 a.m. and 6 p.m.  and to surrender his travel document.

The court has ordered that stop notices be placed at ports of entry and exit and that Grant obtain the permission of the court to leave the country.

The next hearing in the matter is slated for Dec. 12.