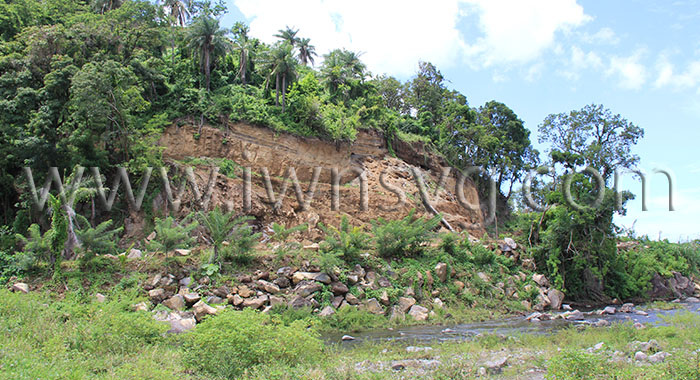 It will be another year before the first pebble rolls off the proposed quarry at Richmond, the investor, Rayneau Gajadhar, told iWitness News on Sunday, even as anti-quarry sentiments in North Leeward ratcheted up with a public meeting on Saturday.

In January, Rayneau Gajadhar told iWitness News that production at the stone quarry was expected to begin in six months.

However, more than six months have passed without any activity at the site, where the government has leased 59 acres of agricultural lands for 30 years, for the establishment of a quarry.

Before the work ceased, the company had cut several profiles in the headland to investigate the amount of rock actually located at the site.

“The findings are that the rocks are very, very deep. And there’s a lot of initial work that needs to be done to get the rock,” Gajadhar told iWitness News.

“So, the cost of getting the rock is significantly more than I anticipated but because there is a demand for it and my commitment to the government to get it done, I will get it done.”

Gajadhar was not in a position to give an estimate of how much rock is at the site although government Senator Julian Francis said the investor had had “multiple orgasms” on seeing the quality of the rock there.

“Actually, for the volume of rocks, I cannot tell you I made a proper estimate, as work was done on that before, which was handed to me by the government of the estimated amount of rock there,” Gajadhar told iWitness News.

“And we went with it. But, you know, this is not about how much you have or how much it does not. I think what it is for the government is St. Vincent has a big port to do and there’s a demand for aggregate in St. Vincent now,” he said referring to the EC$600 million port being built in Kingstown.

“ … what I have to do now is to ensure that I deliver some of the material necessary to them immediately, as soon as I can,” said Gajadhar who told iWitness News in January that the scale of the production would be such that 99% of the aggregates would be for export.

He said that when one looks at the rock face, “you see one thing.

“And the other thing. is when you get into there, it’s something different. But there’s going to be a major cost in getting the material. I promised that I would do it. from a government point of view, they see it as a necessary thing to do for the country.  I gave them the undertaking I will do it and I will continue to do it.”

Work recently restarted at the site where Gajadhar said “we’re just preparing for us to do a layout of where the plant is going to go”.

He said that preparing the platform would take between 40,000 and 60,000 cubic yards of material.

“And that is where the first part of the crusher is going to fit. So that’s what we’re doing now,” he explained.

In May, Parliament voted against a motion brought by Leader of the Opposition, Godwin Friday, saying the quarry should be “halted immediately pending satisfactory consultation with residents, including farmers, business people, fisherfolk and public sector workers, a satisfactory environmental impact assessment of the project, and a satisfactory review of the financial arrangements between the Government and Rayneau Construction concerning the project”.

“… but as you also know that there was a motion tabled in Parliament to stop the quarry. As an investor one must be very careful of what they do, and what they don’t do. And it was not my intention to just go and just do stuff. Because you also have to respect the people. Based on that, I ended up doing a lot of other stuff other than St. Vincent.”

He said that he is now in Guyana “doing a lot of stuff”, having secured a 2,500-acre plot and another that is 1,300 acres for quarrying.

The businessman said he is also working on an additional quarry in St. Lucia and one in Antigua, adding, “and I’m doing a lot of other stuff”.

He said he was, however, resuming work at Richmond because “the calls came back for us to restart the project there as I think the demand for aggregates in St. Vincent has become even greater now.”

He said the calls for him to return to the country have come from “the people of St. Vincent.

“The same way you call me on the phone. That’s how calls came to ask, ‘Rayneau, when are you coming back?’ Because there’s a dire need for the material and I got called from a number of people that I do not wish to mention their names. So, I figured maybe I should come back. Because the situation, apparently, is not as good as they thought it to be.”

Gajadhar said he has been offered to take over two functioning quarries in St. Vincent.

“But I have not done it yet. And that is current locations already being mined but, apparently, cannot be done profitably,” he said, but declined to say the location of the quarries, adding only that they are “operational quarries, with licences, with permission”.

He said he has not made a decision about whether he would take over the quarries “because you see, I gave an undertaking to the government of St. Vincent. I cannot seem to just run away from the undertaking that I have given for something that seems easier”.

The investor said he has “not used my imagination yet on it” and that is why he had not made a decision about taking over the operational quarries rather than start from scratch in Richmond, where he is facing some opposition.

“And I give an undertaking that I am going to do and I will do it,” Gajadhar said.

iWitness News observed that Gajadhar was sounding more like a public sector investor rather than the astute businessman he appeared to be earlier this year.

“Well, the thing about it is I gave the undertaking, I got the concessions and I agreed to do and carry out a quarry operation,” he responded.

“Even if I do decide to joint venture with the other guys, this one will continue based on my initial agreement.”

“The reality is, based on where we are now, it’s going to take at least another year. Because you see, this thing takes a lot of work to get it ready. A lot of work. And because of those little ins and outs, you know, I didn’t want to rush it and I didn’t want to bulldoze my way through it. I wanted people to air their views, to hear what’s going on.”

Some farmers on the lands that the government leased to Gajadhar’s company found out about the lease when they learnt that his tractors were bulldozing through their crops in January.

Gajadhar said that his company is going to be doing the layout to prepare the site and will use some of the dirt (overburden) on the headland to create berms around the property.

“… and then we’re going to continue with the berms on the perimeter so that no water, nothing gets out of the property. So that’s what we are doing now,” he told iWitness News.

“We are a long, long, long way away from even putting plant in place,” he said, adding that the plant has been in St. Lucia for over a year.

2 replies on “Richmond quarry delayed a year; site has more dirt than expected”