Speaker orders MP to wear facemask, even as unmasked cop sits nearby (+video) 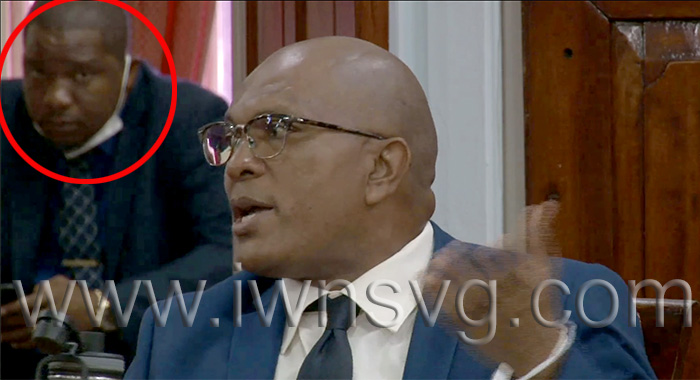 House Speaker Rochelle Forde, on Monday, maintained that opposition lawmaker Nigel “Nature” Stephenson could not sit in the assembly chamber without a face mask, even as cameras showed two people sitting nearby without face masks.

It is not clear whether the speaker could see the two unmasked individuals or whether they were in the assembly chamber or an adjacent room.

However, one of them is a member of is a station sergeant of police, who is a senior member of Prime Minister Ralph Gonsalves’ security detail and the other appeared to be a female staff member of the House of Assembly.

The protocol says the requisite number of law enforcement officials will be permitted “in and around the chamber all of whom must be masked with an N95 mask at all times”.

The number of House of Assembly staff in the chamber is limited, only to the clerk and the sergeant- at- arms and masked with an N95 mask at all times.

The protocol says that each member is required to wear an N95/KN95 face mask at all times while in the Chamber; and sanitise their hands and have temperature checks performed upon entry into the parliamentary chamber.

The exchange between Forde and Stephenson occurred as Opposition Leader Godwin Friday was about to deliver congratulatory remarks.

Forde asked Stephenson, who is into his third term as MP for South Leeward, whether he was feeling unwell.

Stephenson’s response was not clear as he was not speaking into a microphone, but he seemed to have said that he was not feeling his best.

Forde said she understood that, adding, “However, you would have seen the new protocols, which have been circulated. So, I am happy to excuse you for few minutes until you feel a bit better, but I can’t permit you –”

It appears that Stephenson questioned the speaker about her suggestion that he wait outside the chamber.

The speaker told him that the house cannot flout the rules as set by the chief medical officer.

“Every other member here is masked. The masks are uncomfortable, we all agree on that, but those are the rules.

“There is a nurse’s station. Perhaps you would have a little word with the nurse, perhaps,” she said as Stephenson continued to sit in his seat and appeared to nod his head in the negative.

All this time, the police officer, who was not wearing a mask, could be seen sitting behind Stephenson.

“Why are we wearing masks?” Stepheson said repeatedly.

The speaker told him that he had seen the protocols, and at this point the police officer who appeared to have been typing on a mobile phone during the exchange, placed over his mouth and nose the mask that he had been wearing under his chin.

The speaker told Stephenson that she did not wish “to exercise a particular power that I have under a standing order.

“I understand fully what you are saying but I, too, have to follow the rules.”

The speaker again told Stephenson that she was imploring him that if he did not feel well he could exit the chamber for a few minutes, but if he remained, he must put his mask on.

At this point, an unidentified woman, who was not wearing a mask, sat behind Stephenson, apparently in an adjacent room.

The speaker then suspended the house for five minutes.

When the sitting resumed, after giving his congratulatory remains, Friday “acknowledged the discussion we had prior”.

He said he had spoken to Stephenson.

“It is not a frivolous matter. He does have difficulty. He and I had spoken about it over the weekend. He wasn’t even sure he was going to be here. So, it is in this context that he had made that request with respect to the mask. He has agreed to the compromise. He will be out of the chamber and come when he feels comfortable. I want it to be understood that these are the circumstances in which he had made the request.”

iWitness News understands that before the exchange on the assembly floor the speaker had asked the sergeant-at-arms to ask Stephenson to wear his facemask.

Stephenson reportedly told the sergeant-at-arms that he had had a cold recently and the mask was affecting his breathing.

8 replies on “Speaker orders MP to wear facemask, even as unmasked cop sits nearby (+video)”