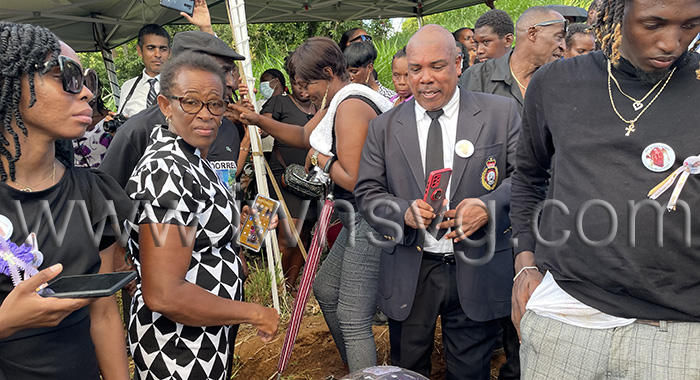 Superintendent of Police Hesran Ballantyne, who lost his daughter at Rock Gutter, stand with relatives and friends of Dorrel Bruce at his grave at the Chauncey Cemetery on Sunday, Oct. 16, 2022.

A man who lost his daughter in the 2015 bus crash at Rock Gutter and never got the chance to bury her body drew on his experience to help comfort the families of the five men who died in similar circumstances in Sandy Bay on Sept. 11, 2022.

“Little did I know that when I lost my daughter and six other secondary school students who were all family to me, at the Rock Gutter tragedy on Jan 12, 2015 in a similar circumstance, that God was preparing me and my experience to bring a sense of comfort, healing and renewed hope to you the families of the deceased, and those affected,” Hesran Ballantyne said in Clare Valley on Sunday.

He was speaking at the joint funeral of Giovanni Enrique “Durh” Barker, 21; Khalil Karl Travis Robin aka “Keno” and “Snackman”, 29; Kenroy Kevin “Pressure” Haywood, 29; Elvis Logie “Billy” Harold, 30; and, Ishmael Dorrel Bruce aka Darrel, 39, who died when the minibus in which they were travelling to a funeral in Owia, crashed in Sandy Bay on Sept. 11.

Ballantyne, a superintendent of police, spoke about the range of emotions he has experienced in the seven years since his daughter, Simonique Ballantyne, 13, died on Jan. 12, 2015.

Simonique was among seven students who died when the minivan in which they were travelling to school from Fancy careened down a steep slope in Rock Gutter and crashed into the sea.

Her body, as well as that of Chanstacia Stay, 15, was never recovered. The other victims of the bus crash were: Jamalie Edwards, 14, and his brother, Jamall, 12, Anique Alexander, 11, Racquel Ashton, 17, and Glenroy Michael, 16.

Ballantyne was not speaking to strangers in Clare Valley, a community in which he lived from when he attended secondary school in 1987 to when he joined the Royal St. Vincent and the Grenadines Police Force in 1994.

“I knew each of them quite well. They were friendly, respectful and could be called upon at any time to do anything for anyone when asked.”

He said that he had a brotherly bond with Bruce, having lived with his family during his years as a secondary school student.

Ballantyne further noted that because of his relationship with the family, Bruce’s mother married his brother and their relationship produced two children.

“On Jan. 12, 2015, a day that’s negatively etched in the memories of my family and I, I felt as though I lost it all when I heard the grappling news.”

He said that at first, the news was that his two precious daughters had both died in the accident.

“But in the relief of it only being one of my daughters, the pain was just as severe. Only God knew how much I could bear,” Ballantyne said.

“There were moments of questioning God, feelings of guilt because I didn’t get to do this, or get to say that or to see certain things accomplished with my daughter. There were moments of regret, times I just needed to be alone and there were times I felt like an Energizer battery — going and going. I just wanted to be kept occupied.”

He told the families that these feeling are normal.

“The emotions that you will continue to go through, are all part of your coping mechanism. Do not listen or give in to negativity, to people saying, ‘Is nah time for he/she to stop grieve? Look how long they died?’

“No one deserves that right to tell you when to stop your grieving process. They’ve never had your experience and, after all, seven years since Rock Gutter, the other parents and I still grieve; our community of Fancy still grieves.

“I know family and friends are always supportive, but I’d like to encourage you, seek positive people to motivate you through your season,” Ballantyne said, adding that, if necessary, the bereaved should seek support from institutions.

“Do not forget to make yourself a priority through your coping and healing process. Keep a diary, write your feelings down, take daily walks, listen to soothing music, change your environment — spend a few days with family or friends, if necessary.”

He told the families that throughout their grief, ensure that they eat something healthy, if even just a fruit.

“… keep hydrated, rest ,and, most importantly, feel good about yourself and treasure the memories and the time they shared with you.”

Ballantyne said that God “knows and sees beyond the bend.

“He knows and wants the best for us. Whatever He does is for His glory, His will and His purpose.

“We may not understand it now, but many broken families and hearts will be mended (if not already). God wants you to BE STILL and know that He is God for He loves and He still cares and wants the best for you.”

He said it is really heart-breaking to suddenly and unexpectedly lose a loved one, and even more incomprehensible to lose five villagers all at once in such a tragic way.

“To the survivors of this tragedy, this won’t be an easy road for you. You may have questions as to why you were spared and feelings of guilt at times. I can only encourage you to simply thank the Almighty for his mercies and be grateful because your purpose in this life is yet to be fulfilled. So, trust God with all your heart and let him direct your path,” Ballantyne said.

He further told the grieving families to take with them 1 Corinthians 10:13  — “There hath no temptation taken you but such as is common to man: but God is faithful, who will not suffer you to be tempted above that ye are able; but will with the temptation also make a way to escape, that ye may be able to bear it.”

“If God brings you to it, he’ll bring you through it. Trust His timing and His plan. May each of you find hope, peace and comfort in knowing that one day, there is a chance that we would all meet our dearly departed Giovanni, Kenroy, Ishmael, Elvis and Khalil again.”