After 9 years, road to Overland school still not repaired 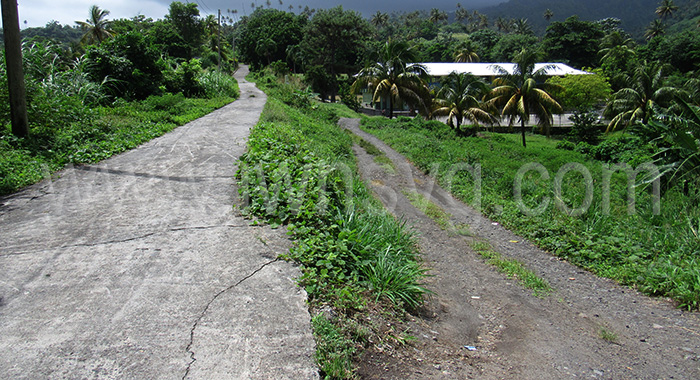 The main road leading to the Tourama /Overland Primary School, which was damaged almost nine years ago, has still not been repaired.

The road, which is also used to access farmlands, collapsed as a result of the December 2013 trough system that brought heavy rains, which claimed 12 lives and resulted in major damage to public infrastructure across St. Vincent.

When iWitness News visited the area last week there were puddles of water on the temporary road just outside the school.

Montgomery Daniel, MP for North Windward, where Overland is located, gave an update on the road last week, saying that while the repairs were initially estimated at EC$500,000, the estimate has now more than doubled, standing at EC$1.1 million.

Daniel, who is also minister of transport and works, gave the update as he announced a comprehensive three-year road repair programme for the country, estimated to cost EC$15 million annually.

He said a financier has been identified for the programme, but did not disclose the financier.

Daniel said that in 2016, assessments were carried out on the road to the Overland school and a contractor was retained at a cost of EC$500,000.

However, “the very week the contractor was mobilised, there were tremendous rains again, in 2016, which caused further damage,” Daniel said.

As a result, the Cabinet approved a further EC$250,000 for the road, Daniel said.

“As the rains further occurred, … more damage occurred and the contract is now EC$1.1 million,” he said, noting that this is more than double the initial estimate.

Daniel said that this situation exists because of a lengthy process.

“Because of the time it would take to go in and design these roads and to the point where you have to have a contractor established and mobilised and so on, because in terms of the contractor — you have to put out for bids and you have to have bid selection and, of course, you have to have your final bid and when that is done, you have the mobilisation process and all this take up time, that’s the nature of the business,” the minister said.

Daniel said that three years ago, the contracting firm of KDL was given a contract to complete two phases of secondary and feeder roads in the country including the Overland primary school main road.

He said, KDL has completed some of the roads and some are still being worked on, adding that the “slow pace” at which the company is working is “very much concerning”.

He however, did not when work on the Overland road was expected to begin.

5 replies on “After 9 years, road to Overland school still not repaired”