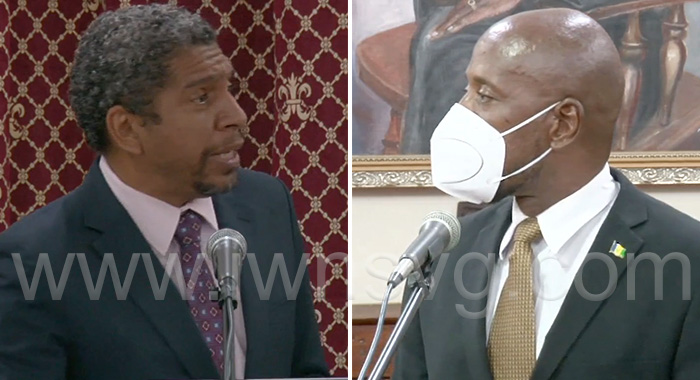 Opposition MP Fitz Bramble says that after two decades in office, the ruling Unity Labour Party should be ashamed of the state of healthcare in St. Vincent and the Grenadines.

He made the point in Parliament last week during the debate on a bill authorising the government to borrow an additional US$30 million for a new hospital at Arnos Vale.

Bramble said the debate was an opportunity for Finance Minister Camillo Gonsalves to instil confidence in the population but failed to give the requisite information.

However, Gonsalves accused Bramble of not paying attention, saying that the government has been talking about the project for years.

Bramble, like other opposition lawmakers, voted in support of the bill. However, during the debate, he said that when Gonsalves rose to present it, he “quipped that this is the first opportunity he would have as Finance Minister to discuss this project.

“And, I am assuming, in this forum,” Bramble said, adding that he was “really taken aback because, to some extent, that confirmed my own impressions” when he reveied the documents for the meeting of Parliament.

He said he asked his colleague what the “Strengthening Health System Resilience Project” was and whether any of them had heard about it.

“And the question I want to ask is, why hasn’t this project been discussed or highlighted or presented or debated before now?” Bramble said.

He said the finance minister was asking Parliament to approve the borrowing of over EC$80 million “for a project which is new to me, is new to this house and is certainly new to the majority of Vincentians…”

Bramble said he was “unequivocal” in his support for the bill, adding, “The problem I have is what appears to be the lack of transparency.

“What does this project entail? What is this project going to do to help the average Vincentian? You heard the minister spend a lot of time talking about some of the issues in the healthcare system which currently exist, and, of course, spent quite a bit of time talking about what I consider to be issues which contribute to the very poor healthcare system we currently encounter in this country.

Bramble said that in St. Vincent and the Grenadines, unemployment, poverty and poor health care are “arguably the three most vexing issues among Vincentians.

“You coming in this Parliament today and presenting — as a matter of fact, quite a number of the issues seem to be conflated. I still don’t understand if this is a project by itself. If this is a project that’s part of a programme for improved healthcare.”

He said the minister “made some general references to some of the plans that your government, your administration has with regards to health care…

“You’re asking us to approve US$30 million for a project which has not been properly ventilated. In fact, in my view, has not been ventilated, period, to the general public,” he said, adding that the minister was “stumbling through” his presentation “because obviously you are unfamiliar with some of the things you were reading”.

Bramble said his mother is elderly and he would like to know that she enjoys some decency when it comes to healthcare.

“So yes, it’s a splendid opportunity, but you have to do the thing properly … so people are properly informed, people are part of the process.”

However, in wrapping up the debate, Gonsalves said that Bramble “had the unmitigated gall to stand up in this Parliament and say that we have not talked about this project before.

“I was absolutely flabbergasted to hear the Honourable Member for East Kingstown say that.”

Gonsalves read from the 2019, 2020 and 2021 Budget speeches in which he spoke about the construction of the new hospital at Arnos Vale.

“How could he say that he never heard about it in this Parliament when we’ve been talking about it in every budget since 2018?” Gonsalves said.

However, Bramble rose on a point of order and said he was speaking about the Strengthening Health System Resilience Project.

“When I say I have not heard about this project, this is the project that I’m talking about,” Bramble said, and Gonsalves said that Bramble’s was not a point of order.

Gonsalves said the project has been discussed repeatedly, adding that  when the government secured approval from the World Bank of US$64 million to help fund the project, it held a press conference, which all the Cabinet members who were in St. Vincent and the Grenadines attended.

The finance minister said that the ministries of Health and Economic Planning have been having consultations across the country, including with residents of Pole Yard, Arnos Vale, as well as doctors and nurses.

“We have been having repeated consultations with stakeholders across the length and breadth of St. Vincent and the Grenadines, talking about this project. And they say nobody knows?”

He said that the government will continue to have consultations.

“This project has been a centrepiece of government policy for years and we have discussed it for years,” Gonsalves said.