‘Look at how Satan is laughing at me,’ murderer tells friend 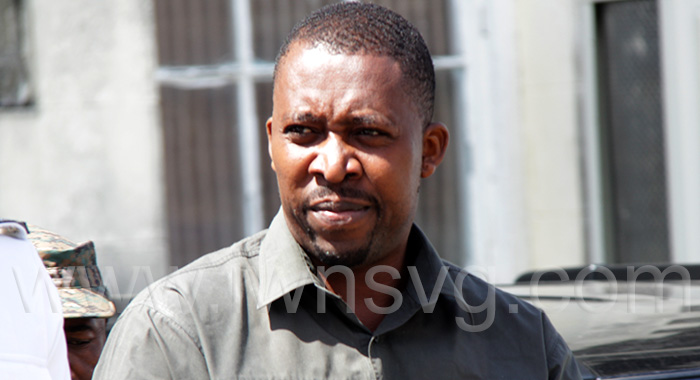 Vandyke King is escorted back to prison on Monday, Oct. 24, 2022 to awaiting his sentencing.

The Park Hill man who murdered his girlfriend in a jealous rage on March 7, 2020, told a fellow villager who visited him in prison that the devil is now laughing at him.

Nicola Charles, a 41-year-old shopkeeper, of Park Hill, made the statement in an affidavit submitted on behalf of Vandyke “Dez” King, 35, who is to be sentenced on Tuesday for the murder of Mickiesha Gumbs, 26, his girlfriend and mother of his then 1-year-old child.

Gumbs, another Park Hill resident, had two other children from a previous relationship.

On Monday, at High Court No. 1, in Kingstown, Justice Brian Cottle heard the mitigation by Counsel Duane Daniel on behalf of his client.

Daniel read from five affidavits filed in an attempt to show that King’s actions were out of character.

In her affidavit, Charles said that she knows King as he is one of her customers.

She said that one day, King passed by the shop and said he was going to the Gumbs’ home to clean.

In response to her comment, King told Charles that cleaning is not a woman’s work, adding that once one loves someone, one has to do whatever one can to help that person.

He said King told him that he had built a room onto Gumbs’ mother’s place so that Gumbs could have her own space and that he had taken a loan from the bank to do so.

She said King told her that he had bought a brand new cell phone for Gumbs, but she threw it away and had stabbed him once, but he did not report it to the police.

The woman further said that King told her that one weekend, Gumbs went to Mesopotamia, saying she had gone to clean a house, but he later heard that she had gone to be with another man.

“He loved that girl, mind, body and soul,” Charles said, adding that the first time she visited him in prison, he said, “Look at how Satan is laughing at me.”

Charles said King was crying and said he did not know what he did or what came over him.

“He is not a bad person but he has done a bad thing. I know he is sorry and I know he has to pay because a life is lost. I want the court to know there is good in him,” Charles further said, adding that she believes that the good is still more than the bad.

Dylan Carr, 26, of Richmond Hill, 26, a junior aviation security officer at Argyle International Airport, told the court that King was his senior and he answered to King when he functioned as a supervisor.

“He was like a big brother to all the juniors,” he said, adding that King would be first in line to assist or to explain something if the juniors were doing it wrong.

“The version of him that I know is a gentle soul,” Carr said, adding that has never known King to be aggressive on the job or to lash out.

Carr said he and King were working together on the day of the incident and even on that day he was quiet.

He said that when he thinks of the incident, he is led to believe that it was two different people.

According to the fact, King left his workplace after receiving a call about someone taking his girlfriend home.

He then stabbed her, resulting in her death.

Carr said he and King were in the room at the airport when King left. He had been mumbling on the phone and might have been wearing an earpiece at the time.

He said he heard the door click and thought that King had gone to the restroom.

Carr said he wished that King had said something to him as perhaps he might have been able to assist.

He said that from what he knows of King, his actions were out of character.

Shackeil Strough, 24, of Park Hill, a police officer of three years’ service who is assigned to the – Prime Minister’s Security Detail, spoke of how King had inspired him to enlist.

He said King is his neighbour in Park Hill.

“He has had a great influence on his life. I looked up to him while growing up and the way he carried himself,” Strough said.

He said he always wanted to be like King, who was a big part of his decision to become a police officer.

Strough said King helped him a lot when he was enrolled at Police Training School and used to help him financially.

“He is a very caring person as a father,” he said, adding that King’s first daughter is 12 or 13 and he would do his best to get her whatever she needs.

Strough said that Gumbs did not have her own space and King spent over a year in Tortola to work and when he returned, he built on to Gumbs’ mother’s house a bedroom and a kitchen for Gumbs and their child.

“He had a good relationship with his [parents],” Strough further said, adding that King was well regarded in the community and would help people building homes in the community to pour concrete or with any other work.

Strough said he could not believe the incident when he heard about it.  He explained that he  was scheduled to do security work that night after which he expected that he and King were to travel home together.

“The whole story took me by surprise.”

He said that he tried unsuccessfully to call King and was worried because of a rumour that King had threatened self-harm.

He said he later reached King who told him he was watching the police at his parents’ house but he wanted Strough to come and take into custody.

Strough said he left to go take King into custody but later learnt that another officer had already done so.

“I don’t know what came over him to do this. As far as I know, even though he and the deceased had their ups and downs, he had mad love for her.”

He said he did not think that King would repeat his action, adding that he had visited him in prison many times and could hear and see his regret.

Strough said he understands the rights to uphold the law and to punish wrongdoing, adding that the person who committed the crime is not the King that he knows and he hopes that the court would take into account the way King was before and grant him whatever lenience is possible.

Lydia Strough, 69, of Park Hill, said in her affidavit that she has known King since he was born and he was generous to her.

She said that his girlfriend would come and ask him if he was going to wash for her and he would go.

Ms Strough said that one Friday, Gumbs told King she was going to clean a house in Mesopotamia and she never returned until Sunday evening.

“He get to find out she was by a man in Mespo,” Ms Strough said, adding that there was no argument, but everyone had heard about the rumour.

She said that despite this, Gumbs and King lived lovingly.

She said that as far as she knew, King and Gumbs were living loving.

Strough said that one day, King raised up his jersey and told her that Gumbs had stabbed him.

She said that one day someone called her to help her to look for King’s shoe so he could go to work.

King asked Gumbs about the shoe and she said she had flung it over a bank, Strough said, adding, King retrieved the shoe but said nothing to Gumbs about it.

“To me, it seems like they were dealing with plenty thing but he never used to talk. He did love she.”

Ms Strough said that King does not trouble people, is mannerly and quiet.

“He was the pillar his mother depends on,” the woman said, adding that sometimes, King’s mother cannot hold up.

She said she wanted the court to do whatever to help.

‘it was not my son who came home that day’

Meanwhile, King’s mother, Silma King, said he is the fourth of her five children — three boys and two girls.

She said King lived with her but would also spend time with his girlfriend.

Ms King said the relationship between her son and Gumbs had some ups and downs.

She said there were times when Gumbs would leave the child at her home and say she gone to town or work and it would turn out that that was not the case.

“It seems that there was someone else that created a little problem in the relationship,” she said, adding that her son and Gumbs once had an argument because someone had messaged her saying, “I love you.”

Ms King said that a few months before the incident there was an incident in which Gumbs stabbed her son in his side.

She said that on the day of the killing, her son came to her house “but it was not my son who came home that day”.

Ms King said she did not know if her son had a nervous breakdown “because he did not even say, ‘Mommy, me reach home’ like he would.”

The mother said she did not know what to say because Gumbs was the love of her son’s life.

She said that when she heard what happened, she could not hold up and all she had to do was “band my belly and cry.

“I was telling people I should have stopped him going back out because it was not my son that came home that day.”

The mother said her son has always been good to her, her children and her family even as she accepts that what he did was wrong.

She said she accepts that even though Gumbs might have been unfaithful, her son should not have done what he did.

“I don’t know if the real problem was that he had loved her too much and that love made him do things he should not have done.”

3 replies on “‘Look at how Satan is laughing at me,’ murderer tells friend”