Man, 18, assaults his mother with cutlass 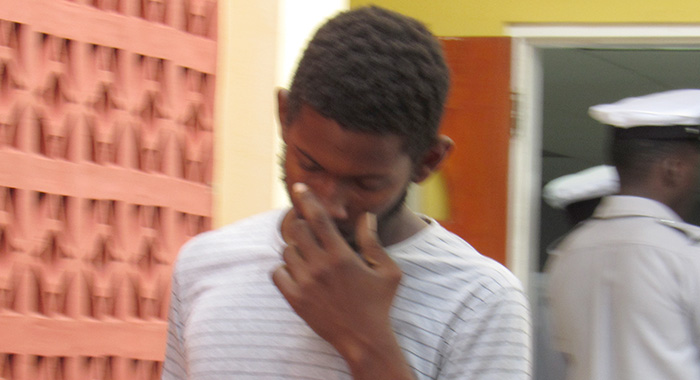 A magistrate has told a man who assaulted his mother with a cutlass that he would go to jail if he appears before the court again within the next year.

If you come back before this court within a year, you go to jail for nine months,” Bertie Pompey told Marvel Baptiste,18, of Magum, at the Georgetown Magistrate’s Court, On Monday.

Pompey found Baptiste, who is unemployed, guilty of a charge that on Oct. 12, at Magum, he assaulted Janista Baptiste with the intent to commit an offence, to wit wounding.

Ms Baptiste told the court that about 6:30 p.m., she was sitting in her porch having dinner when the defendant inquired about a pair of slippers.

“I told him I do not know anything about your slipper,” the mother said

She said her son walked away and came back about five minutes later, enquiring about a gold ring he said he had in a blue tub.

“I told him I don’t know anything about the ring. He said he wanted EC$50, for the ring,” Ms Baptiste told the court.

“I left the porch and went in the yard and he came down off the porch with a cutlass and stand in front of me with the cutlass and say If I don’t give him the money, he go do something.”

Ms Baptiste said she felt “frighten like me going and die.

“He was standing about two feet away from me, and he was swinging the cutlass in front of me,” she said, moving her hands up and down in illustration.

“He told me, ‘Yo better nah mek me do yo!’” Ms Baptiste said, adding that her son then took the cutlass to the porch and put it away.

Marvel had no questions in cross examination of his mother nor the arresting officer, Corporal 130 May.

He also offered no evidence in the matter.

However, in his caution statement, as read by Corporal May in the courtroom, the defendant admitted to the incident but said, “Me foot slipped while me was going down the steps. Me then put up the cutlass up in the air. Me mummy been deh, but me never swing the cutlass after me mummy”.

In handing down his sentence, Pompey asked Baptiste if he was on a bond in the sum of EC$3,000, in default nine months?

The magistrate asked Ms Baptiste to stand in the dock and told her, “Miss, your son is already on a bond and he breached the bond so he’s going to prison.”

“Well, how he make up he bed, he would have to lay down on it,” Ms Baptiste said

She told the court that her son uses cocaine and smokes a lot.

“I am going to suspend the sentence; nine months suspended for a year,” the magistrate said

“And stop the use of drugs eh. You’re heading down the wrong foot.”

In August, Mr. Baptiste was charged with assault occasioning bodily harm against Garicia Bailey, of Magum. He was also charged with throwing missiles.

However, the charges were dismissed after Bailey indicated that she did not wish to proceed any further.

Later that same month, Mr. Baptiste was fined EC$200 and had to pay compensation of EC$199 within a month for smashing an Alcatel cell phone belonging to his father, Kevin Patterson, also of Magum.