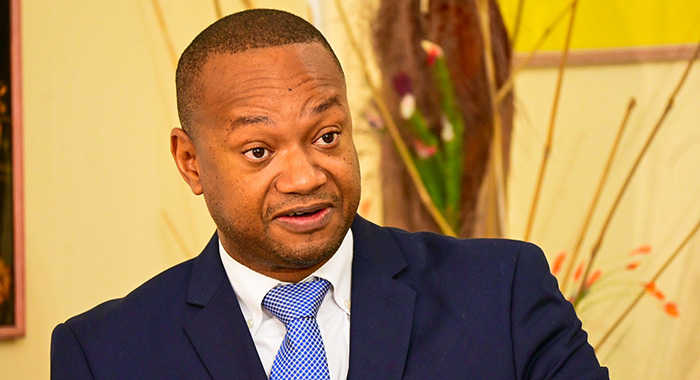 Newly-appointed Attorney General Grenville Williams used his swearing in ceremony, on Friday, to emphasise his office’s responsibility “to protect, preserve and uphold the rule of law, to ensure the public has confidence in the rule of law”.

On Tuesday, Williams became the third person to fill the post of attorney general under the Unity Labour Party (ULP) administration, which has opted for public servant rather than political chief legal advisor since coming to office in March 2001.

At the ceremony at Government House, Williams quoted the inauguration speech of the 35th President of the United States, John F. Kennedy.

Williams said that when Kennedy said “Ask not what your country can do for you. Ask what you can do for your country”, he inspired children and adults in the United States to see the importance of civic action and public service.

The historic words “challenged every American to contribute to the public good,” Williams said.

“I apply those words to the Vincentian context in saying that I am humbled and honoured to answer the call to serve my country to be the principal legal officer for the government, to serve all Vincentians and the wider regional and international community who will be impacted by the actions and decisions of the office of the Attorney General and the state machinery.”

Williams comes to the office just two months after announcing that he is still interested in representing South Leeward in Parliament.

In 2015, he failed in his bid to become the ULP‘s candidate in the district, withdrawing at the primary and endorsing then senator Jomo Thomas, who lost in the elections that year against the incumbent Nigel “Nature” Stephenson of the main opposition New Democratic Party.

Williams told Friday’s ceremony that the “cardinal responsibility of the attorney general is to protect, preserve and uphold the rule of law, to ensure the public has confidence in the rule of law.

“To build a successful nation, our people must respect the law, our citizens must feel comfortable that we have clear laws which apply to everyone and where there is a contravention of the law, there will be access to redress through independent and impartial courts,” he said.

“To uphold the rule of law and advance the administration of justice in St. Vincent and the Grenadines, I intend to work collaboratively and cooperatively as far as reasonably possible with the various arms of government, lawmakers in the administration and those in the opposition as well, statutory agencies, the judiciary, and magistracy the members of the legal fraternity, civic society, and I will not forget the ordinary man and woman whether they are in the streets of Questelles — my home village — or in the streets of Kingstown while maintaining independence, objectivity and sound judgment.”

He said that people might ask “What does the future hold?”

“It is my vision that the team or the Attorney General’s Chambers … will provide pragmatic solution-oriented advice to the government and people of St. Vincent and the Grenadines. We will assist in shaping policies, advancing a progressive legislative agenda and where cases are brought against the state, conducting the matters in a fair, objective and professional fashion,” Williams said.

He quoted his “a learned friend” who said “the deepest satisfaction that the law can give is reserved to those who see it as a force for the common good, a noble calling that can at its best, transform lives and build nations”.

Williams replaces Jaundy Martin, who is leaving the post after five years to be with his family, according to Prime Minister Ralph Gonsalves.

At Friday’s ceremony, Martin expressed confidence in Williams’ ability to fill the post.

“I have known Granville for most of my own career for he was admitted to practice about two or three years after my own admission. and from my personal knowledge, it is no surprise that the government and people of this, our nation, has reposed confidence in him to serve in the high office that he now holds,” Martin said.

He said that Williams — who is in his mid 40s — “is very much a young man in the prime of his life and the evidence is clear that the cause of young people in this nation is being championed and this is in no uncertain terms at very high levels”.

Martin said that William is “no ordinary young man. He is a legal scholar at the top of his profession, a proven administrator par excellence in this country and abroad, a master of interpersonal relationships and an erudite advocate.

“He is an excellent Vincentian husband and father, Martin further said of Williams who is married and has two sons.

“Certainly, Grenville is overqualified and the nation is guaranteed of excellent service and representation in all spheres of office that he now supervises,” Martin said.

Up until he took up the post of attorney general, Williams was director, Asset Recovery Unit (ARU) of the Regional Security System, which is based in Barbados.

His role included capacity building, legal and regulatory strengthening and enforcement in countering serious organized crimes and money laundering across the Eastern Caribbean.

He first joined the ARU as Regional Financial Investigations Advisor.

Williams spent 10 years at the SVGFIU, eight of which he was its director.

During his tenure as director of SVGFIU, the unit became internationally recognised as a centre of excellence in financial investigations related to proceeds of crime and the recovery of assets.

He provides training and expert advice at numerous compliance and money laundering engagements worldwide in places such as Taiwan, Washington DC, Brazil, Jamaica, Barbados and the OECS.

Williams is an attorney-at-law and obtained his Bachelor of Laws Degree from the University of the West Indies and Legal Education Certificate from the Hugh Wooding Law School.

He holds a Masters of Law (LLM) with specialisation in banking and finance from the University of London and a Post-graduate diploma in compliance from the International Compliance Association.

2 replies on “New AG promises to work ‘collaboratively and cooperatively’”