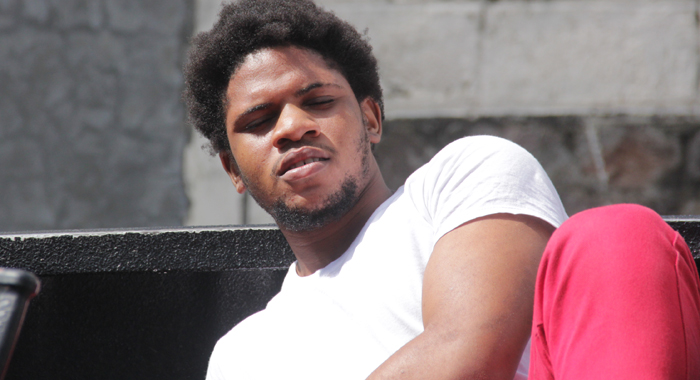 Jerroy Phillips “rocks back” in the pan of a police truck as he awaits transportation to prison after his court appearances on Nov. 27, 2018. He was shot and killed in Redemption Sharpes on Nov. 5, 2022. (iWN photo)

A 27-year-old man, who chalked up his first criminal conviction — a baffling burglary — five years ago, then went on to be charged for a number of other serious crimes, including armed robbery and kidnapping, was among the two men shot and killed in Redemption Sharpes on Saturday.

The man, Jerroy “Jay-Jay” Phillips, of Redemption Sharpes/Rillan Hill, died in a hail of bullets that left three other people injured in the Central Kingstown community.

The other deceased is Lorenzo “Scene” DeShong, a 30-year-old labourer, also of Redemption Sharpes, who died at the Milton Cato Memorial Hospital (MCMH), where he was taken for medical attention, police said.

Police said that around 2:35 p.m., officers from the Major Crimes Unit received information about a shooting in Redemption Sharpes.

On arrival at the scene, Phillips and Deshong were found with multiple gunshot wounds to their bodies.

Phillips was pronounced dead at the scene by the district medical officer and Deshong died at MCMH.

“Investigations revealed that a group of men was congregated in front of a liquor and provision shop when a white jeep, registration number unknown, drove by and stopped in front of the shop. Approximately four men dressed in black with their faces covered with masks, exited the vehicle and fired gunshots at the group,” police said in a release.

A post-mortem examination is expected to be carried out on the bodies to ascertain the exact cause of death.

“All information received would be treated confidentially. Investigations into the matter are ongoing,” police said.

The killings bring to 36 the number of homicides in St. Vincent and the Grenadines this year.

In February 2018, Phillips, then 21, and Anthony Hope, 16, averted prison time for a burglary of the St. Hills Insurance Building that baffled the Kingstown Magistrate’s Court.

After the court heard the mitigation of their lawyer, Grant Connell, which included testimony from Pastor Cecil Richards, the men were handed four-year prison sentences suspended for 18 months.

Phillips was also charged with boxing a 19-year-old bus conductor of Redemption Sharpes on his upper lip, causing him actual bodily harm about 5:30 p.m. on Oct. 6, 2018.

He escaped the attempted murder charge when the virtual complainant offered no evidence against him at the High Court earlier this year.

He was also charged with kidnapping Baptiste by using a vehicle to take Baptiste away, without his consent, following the alleged robbery.

Also in November 2018, Phillips was charged that on Nov. 1, 2018, at Indian Bay, being armed with a gun, he robbed Osborne Bowens, of Glen, of a number of items, including a Glock 19 9mm pistol loaded with 15 rounds of ammunition.

This matter was still pending before the court when Phillips was killed on Saturday.

Also in November 2018, Rondale Greaves, a dog breeder of Dorsetshire Hill and Calder, told the court that he used “VINCY BUY AND SELL”, a Facebook page, to locate four pit bull puppies worth EC$7,200, which were stolen from him.

Greaves made the disclosure at the Kingstown Magistrate’s Court during the trial of Phillips and Andre Gibson on charges related to the theft of the animals.

Gibson was charged with handling stolen goods, to wit four puppies, a crime he allegedly committed between June 21 and 22, 2018.

Phillips was charged with handling stolen goods, to wit three of the same puppies during the same timeframe.

In February 2020, the Kingstown Magistrate’s Court jailed Phillips and his cousin, Rolando Cato, 20, of Ratho Mill, for nine and 10 months, respectively, for stealing from a tourist.

Phillips was also identified as a suspect in the murder of Sabitree Lyttle, a 56-year-old shopkeeper of Paul Over, at her home on Nov. 14, 2018.

Jebarry Jackson, of Campden Park, who also goes by the name Michael Richards, was charged with that crime and is awaiting his trial at the High Court.

Then, on April 19, 2022, Phillips, along with Kori Anderson, or Barrouallie, were brought before the Kingstown Magistrate Court on six charges, including on joint charge, four against Phillips and one against Anderson.

Phillips and Anderson pleaded not guilty to charges that between April 12 – 13, at Questelles, he entered the Rubis Gas Station as trespassers and stole one Vitamalt, valued, two Lucozade, one tropical rhythm, to magnum, and one digital scale, total value EC$94.75, the property of Rubis Gas Station.

Phillips pleaded not guilty to charges that on April 12, at Redemption Sharpes Public Road, he drove motor vehicle PJ505 without being the holder of a driving permit; without there being in force a policy of insurance or other security in respect of third party risk in respect of the said vehicle;  and that the took the vehicle without the consent of the owner or any other lawful authority.

He also pleaded not guilty to a charge that knowing or believing one crowbar to be stolen goods, he dishonestly received same for his own benefit.

After entering the not guilty pleas, Phillips told the court that he would like a prosecutor different from acting Corporal Corlene Samuel who usually prosecutes at the court, to handle his matter.

“I feel like she has a personal vendetta against me. Every time I come here, she try to display like I am a menace to society over allegations,” Phillips said.

However, Senior Magistrate Rickie Burnett, who was presiding, told Phillips that the job of the prosecutor is to present her case to the court.

“She called me a menace to society multiple times. She did so when he was sentenced to nine months, based on allegations before the court, all of which I won,” Phillips responded.

However, the magistrate told Phillips that he (the magistrate) judges the matter based on what is before the court.

“You need not worry about what the prosecutor says. So, don’t worry about that. Leave that to me,” Burnett told Phillips.

The magistrate granted Phillips bail in the sum of EC$4,000 with one surety.

6 replies on “Murder victim had racked up charges for burglary, theft, robbery, kidnapping”