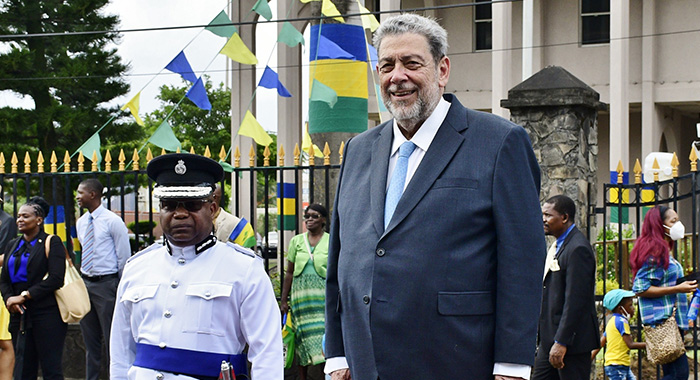 Prime Minister Ralph Gonsalves has criticised private sector businesses in Kingstown, which he said did not decorate their building during Independence celebrations last month.

Gonsalves said on radio, on Sunday, that he is hoping that businesses will do better during the yuletide season to help to lift people’s spirits.

“We just finished Independence. As a nationalist and as someone who not only has been leading this country for 21 and a half years, I must say that I’m disappointed in the response of most of the private sector to independence,” the prime minister said on WE FM’s “Issue At Hand”.

“You drive around the town, you see the buntings and so on, on government buildings,” he said even as he admitted that last year, the government “was a little slow in bringing out their buntin”.

He said that the government did so much earlier this year “and it was more overwhelming.

“And they got new buntings, fixed up the public places and you have schools calling my office wanting 100 flags; you see the people turn out at Victoria Park in the large numbers, you go at Rabacca, you see the ordinary people that turned out with the madungo and everything else but you drove around town, only few private sector buildings had any buntins up, any paraphernalia.”

He said that “outstanding in their performance” was Jax Enterprises Ltd.

“You see how they pretty up their place for Independence? Why can’t other businesses do something similar to Jax?

“I am asking the private sector for Christmas, invest some money; we have to lift our spirits; start earlier in putting up your Christmas paraphernalia.

“Let’s start it earlier. These lights don’t burn so much electricity, you know. I’m talking about these Christmas lights. Certainly, by the end of this month the latest, we should be seeing those things, man,” Gonsalves said.

He said that more people are lighting up their communities, noting that Point, in North Windward, has been winning the national community light-up competition for years.

“So, I hope this thing, for Christmas, I see something more. Look, the point I’m making … is the point of respairing. We have to embrace fresh hope. We got to lift our people’s spirits,” Gonsalves said.

“Leh we lifted it even better for Christmas than we have been doing it throughout the year.  Let’s lift it better. And I would love the church men and women to be involved in it. Not those who just think that the emphasis should be on hollering.

“You know, we get some of that, you know, I’m talking about let us do things for good and uplifting purposes, not to divide one another and create confusion. Let’s lift the spirit.”

One reply on “PM criticises business for lack of independence decor”