Gov’t not responsible for personal back walls — PM 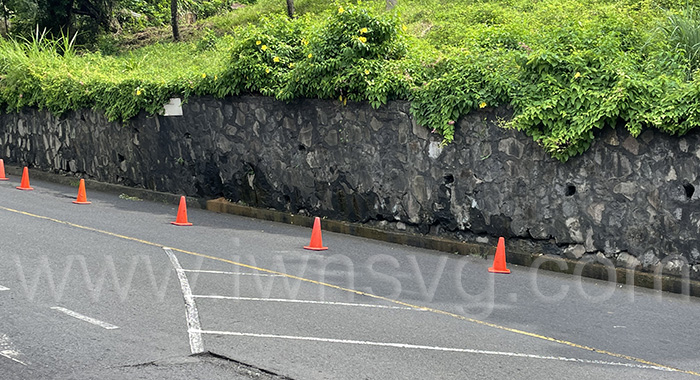 A back wall in Sion Hill showing signs of failure on Wednesday, Nov. 9, 2022.

The government is not responsible for building back walls on private property, and sometimes, homeowners should consider whether they should actually relocate, Prime Minister Ralph Gonsalves says.

He noted that there has been a lot of rain in St. Vincent and the Grenadines recently, resulting in landslides and the collapse of some retaining walls, adding that some back walls are needed.

“… let us, first of all, be realistic. The government of St Vincent and the Grenadines can’t be responsible for your own personal back wall,” Gonsalves said on Wednesday on NBC Radio.

“The Government of St Vincent and Grenadines would intervene where if it is a personal back wall but it connects to, links, concerns the safety of the public — adjoins the public roads, a place where people pass a lot, where serious public safety and welfare is involved,” Gonsalves said.

The prime minister did not speak about any specific retaining wall, but his comments come at a time when there is discussion in the public sphere about a retaining wall along the main road in Sion Hill that is showing signs of failure.

The authorities have, for yet another time, put up cones in the area, warning pedestrians and motorists not to walk or drive too close to the wall.

Some people have speculated that with the large cracks that have appeared at the base of the bulging stone wall, its collapse could be imminent in light of the continuing heavy rains in St. Vincent.

Some people have said that the government should demolish and rebuild the wall, in the interest of public safety.

In his comments on radio, Gonsalves said he was going to have a discussion with Minister of Works, Montgomery Daniel.

He did not say that the discussion was about any particular back wall, but said he has been in communication with the Minister of Finance, Camillo Gonsalves on the issue of people needing assistance with back walls.

“… and we have to find some way to assist with a public policy now addressing this particular issue. But the idea that as soon as your private back wall falls down, you call NEMO and you expect BRAGSA to come and build you a back wall, that cannot be reasonable. Because, in some cases, in fact, in many cases, the price of the back wall is more than the price of constructing a house,” the prime minister said.

“So, sometimes, what you will have to consider is whether you move from where you are. In other words, we must have a sensible, intelligent discussion within the context of our obligations and the resources, bearing in mind always that is a government of solidarity and wanting to help people.”