The bandits of the ocean 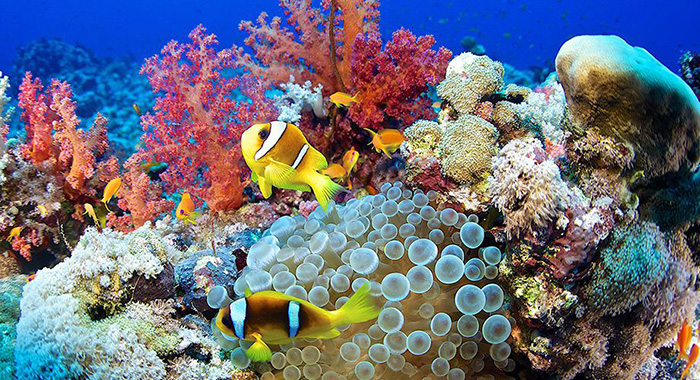 The ocean is under siege from bandits. These bandits are running wild and their mission is to deprive fisher folk of their livelihood and to destroy the biodiversity of the ocean. Who are these bandits? We are the bandits of the ocean.

Agriculture is imperative for food security and it provides a livelihood for many farmers around the globe. It also contributes to the gross domestic product of many countries. However, a lot of farmers and persons who are involved in backyard gardening are usually pressured into using synthetic fertilisers because they release nutrients very fast for growth and development of their crops. While this is good, synthetic fertilisers usually leach into streams, causing eutrophication.

Eutrophication is the abundance of nutrients such as nitrogen and phosphorous, which comes from sources including fertiliser run off, sewage, grey water, and causes an outbreak of algae, depleting the oxygen in the water, causing marine animals and plants to die, which can further lead to a dead zone in the ocean.

Some farmers also construct pig pens close to streams, and tie their livestock close to riverbanks. When the wastes from these animals enter into the river, then into the ocean, it causes eutrophication. During heavy rainfall, pesticides are also washed away from farms into streams and the ocean. In the ocean, they poison the water, which can result in the death of many marine animals. Grey, or as some persons would call it, “soapy water”, is lightly-used water from your bathroom sinks, kitchen sinks, shower tubs and washing machine. It is not water that has come into contact with faeces. Grey water contains a lot of phosphorus and nitrogen, which causes eutrophication. In some countries, there are a lot of households and businesses that empty all of their grey water in the ocean and in the streams.

Single-use plastic destroys the aesthetic beauty of beaches, which can affect the tourism industry. In the ocean, plastics are broken down by sunlight, wind, and wave action into “micro plastics”. Micro plastics are usually mistaken for food by marine animals and when consumed, it blocks their digestive system, causing them to die. Some scientists are of the opinion that if nothing is done urgently to alleviate plastics from entering the ocean, by 2050 there would be more plastic than fish in the ocean. Plastics also make it difficult for sea turtles to lay their eggs on the beach, because they cause obstruction and entanglement to both nesting females and emerging hatchlings, putting them at risk of going extinct. In St. Vincent and the Grenadines, some beaches are heavily polluted with plastics and the evidence of this can be seen after a beach clean-up.

Climate change is a disaster to the marine ecosystem. Humans continue to burn fossil fuels, which is having a negative impact on the marine ecosystem. According to CNN, the concentration of carbon dioxide (CO2) in 2020 was 149% higher than levels before industrialisation, hitting another annual record. Climate change is causing the ocean to get warmer, which is causing a lot coral bleaching to occur. According to a Caribbean National Weekly article, coral reef in the entire Caribbean region continues to be under bleaching watch conditions and warning conditions are becoming more prevalent. Warmer waters would also cause mass migration of marine species in search of the right conditions for feeding and spawning. Ocean acidification also occurs as a result of an increase in carbon dioxide in the ocean. The more acidic the ocean is, the more harmful it is to sea creatures like oysters, corals, plankton, and shellfish that grow hard shells made of a chalky mineral called calcium carbonate. If ocean water becomes too acidic, it can begin dissolving those shells.

Here are some tips for conservation of the ocean:

The ocean is being neglected and is taken for granted. For example, the ocean is a carbon sink. Sea grass removes carbon dioxide from the atmosphere 30 times faster than a rainforest. However, they are under threat from pollution. St. Vincent and the Grenadines and the rest of the Caribbean have some of the most pristine beaches in the world and crystal-clear water for diving. Let us continue to conserve the ocean and eradicate these bandits from the ocean before it is too late.

One reply on “The bandits of the ocean”