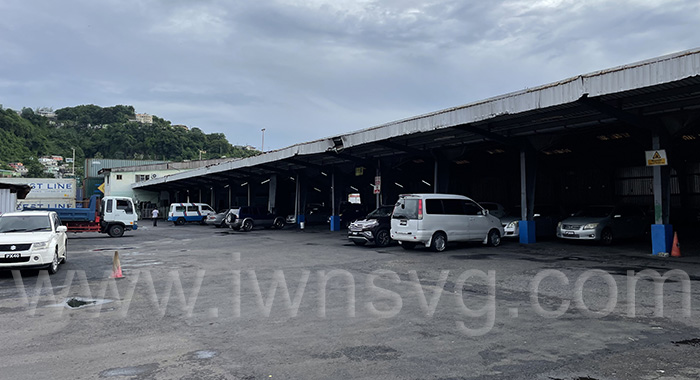 The Geest Shed in Kingstown.

Omnibuses whose terminal is currently located at Little Tokyo, Kingstown will move to the Guest Shed and Bedford Street while the business terminal is rehabilitated.

Prime Minister Ralph Gonsalves said recently that during the rehabilitation, temporary bus stands will be set up, as it would be difficult to find a single space in the city to function in this regard.

“And that has to be worked out with the Port [Authority] and the police and the like,” he said, noting that the police were present at a planning meeting last week to discuss the project.

Gonsalves said a temporary bus stand will be set up in the area of the Geest Shed.

“And you wouldn’t be able to accommodate everybody but you remember that, that we used to have the bus stop used to be at [Bedford] Street?” Gonsalves said, adding that a bus terminal was located there before Little Tokyo was built.

“But these are options and we have to look at them. So, a lot of detailed work has to be done there.

The prime minister said there are close to 600 registered mini buses which are operational and “probably” close to 400 are the windward side of St. Vincent.

“So we have to have them divided properly and we have to make sure that persons who we move from there don’t go by the Leeward Bus Terminal. So there has to be proper controls and, naturally, if you’re using [Bedford] Street, the vendors there have to move”

He said that in rehabilitating Lyle Tokyo “you have to break down the place and rebuild.

“But before you do that, we have to send personnel in there … You have to talk again to people individually and deal with some issues of ‘compensation’,” he said, adding that while the government has no obligation to pay compensation, “… you know how this Labour government functions.

“And we’ll have to relocate some of the vendors,” he said.

Gonsalves reiterated that there are currently in excess of 30 rum shops in Little Tokyo.

“I’m not looking for space for anybody to have any rum shop. I’m talking temporarily. And then when we rebuild again Little Tokyo the children and grandchildren of the fellows who are running their own shops, I expect them to have computer repair shops, salon, barber shops, design work and tailoring and you know where people can make pants and frock; where we can have the creative work, artist and painters and sculptures,” the prime minister said.

“We have to move; we have to advance and change. And in any case, I mean, a bus stop and alcohol; driving and alcohol, what kind of combination is that?” Gonsalves said.

“I know some people going fight me on this but you know me already. I put my ideas to the people and the people will make a determination and I don’t bother about the demagoguery of any opposition politician or any wanna be politician who want to make some opportunistic name for themselves.”

One reply on “Windward bus terminal to move to Geest shed, Bedford St”