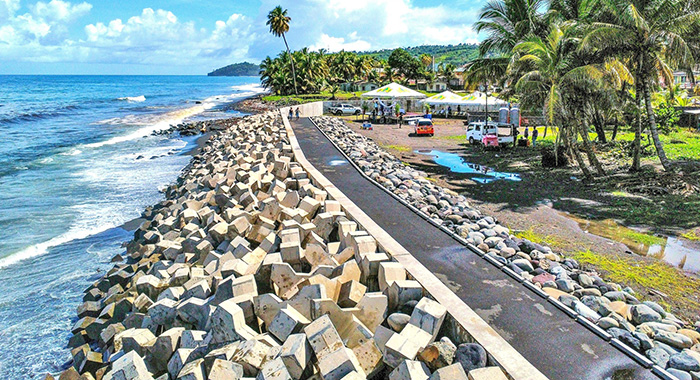 The government has spent EC$25 million on coastal defence in the east coast town of Georgetown. (Photo: Lance Neverson/Facebook)

Prime Minister Ralph Gonsalves is supporting the suggestion by his Antiguan counterpart, Gaston Browne that countries most affected by climate change, such as those in the Caribbean, seek redress before international courts.

In his address to the United Nations General Assembly, in September, Browne called on world leaders “to act on behalf of the smallest and most powerless among us, and in the interest of global justice”.

He said that an opportunity looms for action, in the form of the resolution being sought by Vanuatu in the coming months to request the International Court of Justice to give an advisory opinion that would clarify the legal obligations of states to protect human rights and environments from climate change.

“Not to support the Vanuatu Resolution would be a vote to circumvent a decision on the legal obligations of each nation,” Browne said.

Browne also spoke of an initiative taken by his country in solidarity with Tuvalu and Palau, which, on the eve of COP 26 in Glasgow in 2021, launched the Commission of Small Island States on Climate Change and international Law (COSIS).

The purpose of the commission is to “develop and implement fair and just global environmental norms and practices,” Browne told the United nation.

“In this connection, it will seek an opinion from the International Tribunal of the Law of the Sea, regarding the binding obligations of its member states, to mitigate the effects of their greenhouse gas emissions, or to pay for the loss and damage they cause,” Browne said.

Gonsalves, speaking recently on radio, in Kingstown, said that damage to private and public infrastructure from recent heavy rains is a result of SVG’s mountainous terrain “and global warming, where we are having bouts of excessive rainfall, alternated with periods of drought and having also storms and, of course, hurricanes too”.

He said these are matters being discussed in Egypt at the two-week 2022 United Nations Climate Change Conference (COP27), taking place until Nov. 18.

Gonsalves said that while he will not attend the climate talk, regional blocs CARICOM and the Organisation of Eastern Caribbean States, of which SVG is a member, are represented by other leaders as well as delegates from AOSIS.

He said “some of our own people” are asking, “‘What Gaston talking about?’”

“But just in case, there’s any doubt, I want to make this point — several points. In accordance with Article 96 of the Charter of the United Nations, we can request the International Court of Justice — pursuant to Article 65 of the statute of that court — to render an advisory opinion on a number of matters, including having regard to the obligations of the states under the applicable treaties, including the Charter of the United Nations, the International Covenant on Civil and Political Rights and on Economic, Social and Cultural Rights, the United Nations Framework Convention on Climate Change, the Paris Agreement, sometimes called the Paris Accord, and the United Nations Convention on the Law of the Sea and under general international law, including the duty of due diligence, the obligations arising from the rights recognized in the Universal Declaration of Human Rights, the principle of prevention of significant harm to the environment, and the duty to protect and preserve the marine environment.”

The Vincentian leader said that having regard to all of those, “we can pose the question for an advisory opinion.

“What are the legal consequences under the various obligations, which I just mentioned, for states, the major emitters, which by their acts and omissions, have caused significant harm to the climate system and other parts of the environment with respect to, 1, small island developing states and other states which, due to their geographical circumstances and level of development are injured or specifically affected by or are particularly vulnerable to the adverse effects of climate change, 2, people and individuals of the present and future generations affected by the adverse impacts of climate change?”

He said that in the 2015 Paris Accord, reinforced at Glasgow last year, countries agreed to work toward keeping global temperature rise to 1.5 degrees Celsius above pre-industrialisation levels.

“…  we are currently at 1.1, 1.2 and there are some national determinations which had been proposed by various countries that they will comply with — the major emitters — and they haven’t done so,” Gonsalves said.

The prime minister said manmade emission of greenhouse gases “is an existential matter for us.

He noted that in Georgetown, on St. Vincent’s eastern coast, the government recently spent EC$25 million on “two small pieces” of sea defence.

“Can you imagine that? We had to borrow that money,” he said, adding that fortunately, the loan, through the International Development Association window at the World Bank, means that the interest rates are very low and the repayment period is long.

Gonsalves further noted that at the Conference of Parties in Stockholm in 2009, developed countries pledged annually from 2020 onwards US$100 billion towards climate change matters, including adaptation and mitigation.

“No money has come down. It’s bare hypocrisy, double-talking,” he said, adding that with the unavailability of fuel in Western Europe as a consequence of the Russia-Ukraine conflict, “very quickly, the countries have gone back, many of them, to provision of electricity by coal, which is the worst form”.

He said that driven by human influence, global sea level has risen faster since 1900 than over any preceding century in at least the last 3,000 years.