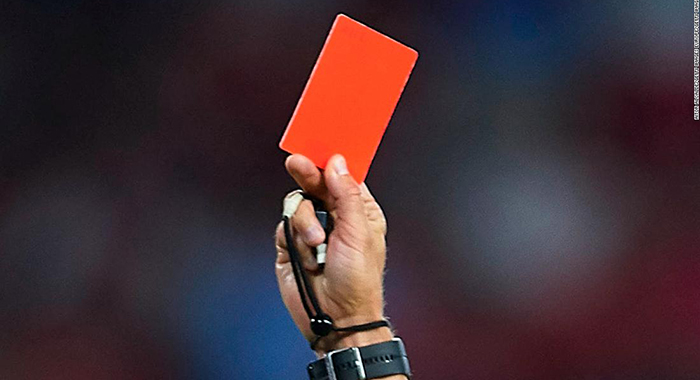 The St. Vincent and the Grenadines Football Federation (SVGFF) says it has banned for 36 months the player who assaulted a referee during a match on Nov. 6, sending him to the hospital with a swollen face.

“The player is immediately suspended from participating in all of the SVGFF sanctioned football activities for the next 36 months and must participate in all the prescribed remedies of the Disciplinary Committee in order for him to resume his football career,” the SVGFF said in a statement.

Further, the club must pay a fine of EC$1,000 before their next scheduled game as a result of the assault, which took place during a match between SV United FC and Greiggs FC

The disciplinary committee also handed down a conditional suspension on Greiggs FC for the rest of the 2022/23 season of National Club Championships.

“Any violation by any player or official of Greiggs FC that brings the game into disrepute for the balance of the 2022/23 season will see the immediate enforcement of a ban that will prevent the club’s participation in SVGFF-sanctioned football activities for 12 months,” the statement said.

Further, Greiggs FC must submit two members of their club or community to the Referee Association for training. The club shall reimburse all of Primus’ medical expenses, the SVGFF said.

The club must participate in a sanctioned conflict resolution intervention over the next six months. The workshop shall be organised through or with the knowledge of the SVGFF.

In a Nov. 9 statement, the St. Vincent and the Grenadines Referee Association said it was “highly upset” by the assault of the referee.

“We want it to go on record and send a strong message to all clubs involved in the 2022-2023 Club Championship that the SVG Referee Association will not tolerate any form of abuse, whether it be physically, verbally, or otherwise, of their officials or referees,” Elroy Lewis, president of the Referees Association said in the statement.

“We will monitor the situation and any developments. If we are dissatisfied with the outcome of the disciplinary proceedings, then we want to reserve the right to handle this matter in the best interest of our officials at heart,” the statement said.