SVG will not send troops to Haiti 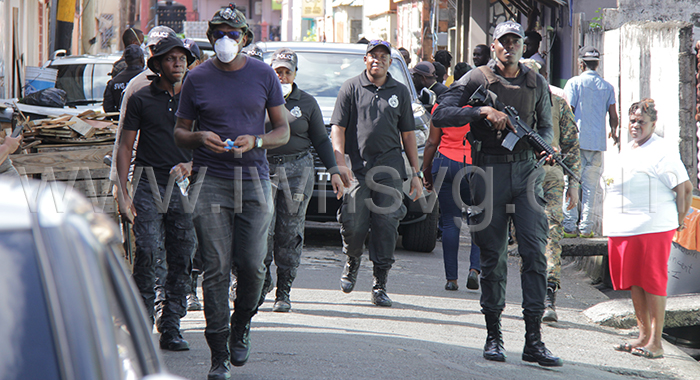 Vincentian police officer during an operation in Kingstown on Thursday, Nov. 17, 2022.

Gonsalves, who is also minister of national security, said such a move by any country could be seen by the Haitian people as propping up a government that the majority of Haitian see as illegitimate.

Gonsalves spoke about the ongoing situation in Haiti after a virtual meeting of Ministers of Foreign Affairs from CARICOM, which was also attended by representatives of the United States.

He said that he represented Kingstown because Minister of Foreign Affairs, Senator Keisal Peters was “on the road and couldn’t connect easily”. The prime minister said that Commissioner of Police, Colin John was also at the meeting.

He asked who is going to distribute the aid when there are gangs controlling ports and in large areas of Haiti.

“So, to deal effectively with the humanitarian situation, you have to have security,” he said, adding that the Haitian National Police has 14,000 people or 1.1 police officers for every 1,000 persons.

“A country that size, normally the thing is about two police [officers] for 1,000,” Gonsalves said, adding that in St. Vincent and the Grenadines, there are 10 police officers for every 1,000 people.

“So, you have a police force, which is numerically weak, but more than that, it is riddled with corruption,” he said of the Haitian constabulary.

“And people associated with the gangs are inside the police force. So, you have to address the security situation. And people from outside will have to go in to help.”

Gonsalves said a discussion is taking place with CARICOM, the United States and Canada as well as at the United Nations — both the General Assembly and the Security Council, “and the idea is to have a non-UN force to go in to help to provide the support with the security for the humanitarian and assistance.”

He said the proposed non-UN force will also prepare the way for democratic elections in a year to 18 months.

“But the security situation cannot be divorced from the political situation. So, you have to fix that. How can you fix that? You have to have an inclusive, meaningful dialogue between the government, the opposition, NGOs, the churches and that has to Haitian-led and Haitian-owned and out of that, you have a result like a national government to deal with the humanitarian situation and prepare the way for elections,” Gonsalves said.

The region’s longest serving prime minister said the political situation in Haiti is also linked to the security situation, which is linked to the humanitarian situation.

“Unless you address that political question of a national dialogue bringing about this government of national unity, an inclusive government, you’re not going to be able to solve properly the security question because any security force which goes in there would be looked at with suspicion as though they’re propping up the current Haitian government. “

He said he was talking about an inclusive dialogue and government of national unity because “most of the people in Haiti consider that the current government doesn’t have legitimacy.”

Gonsalves noted that then-Haiti President Jovenel Moïse, who was assassinated on July 7, 2021, had said two days earlier that he would appoint as prime minister Ariel Henry, who was subsequently appointed to the post.

Gonsalves noted that Moïse was assassinated before appointing Henry.

“But after Moise was killed, the United States, Canada, Western European countries, in order for the sake of order and everything, say well on the basis of President Moise word of mouth about he will appoint Henri, though the instrument was not done, he was the man and he had expressed that intention. So Henry became the prime minister on the basis of word of mouth of a man who was assassinated and who didn’t formalise the appointment,” Gonsalves said.

He, however, noted that Moïse term in office would have ended in February this year, adding that some people in the opposition said it was February 2021.

“If he was appointed on the word of mouth of Moïse, that word of mouth expired when Moïse’s term came to an end in February this year,” Gonsalves said, adding “you see why so many Haitians are questioning the legitimacy of the current government. Now, I have nothing personally against Henry.”

Gonsalves said he has participated in discussions with Henry and will continue to do so.

“But we have to speak these things honestly, if we’re going to have a proper conversation. And there are some people who want, before the dialogue is completed and the national government is formed, they want to go in with police and troops.”

The prime minister said these people who he said want troops to go into Haiti want the support of CARICOM.

“Well, one thing I’ll tell you, St. Vincent and the Grenadines will not be sending any police in that situation because I don’t want anybody to interpret us as going to send the police there to help to prop up the government, which so many people are contending inside of Haiti doesn’t possess the legitimacy and that there must be serious dialogue and CARICOM has volunteered to facilitate it.”

He said the United States and Canada are prepared to support CARICOM’s facilitation of that dialogue.

“But even if we have proper security guarantees for that delegation, I don’t know who all are going to go in to help with that facilitation,” Gonsalves said, adding that  maybe the facilitation might have to take place outside of Haiti.

“So it’s a complicated business. And in these discussions, a lot of people are talking around subjects. But eventually you’re going to want to ask people to help with police and those who have defence forces to help with them from the CARICOM…”

Gonsalves said he was in a discussion with CARICOM leaders and Prime Minister Justin Trudeau of Canada, who he said has “a pretty good idea as to what is taking place and he certainly would like CARICOM to be involved”.

He said some people would question the use of sending to Haiti a team comprising representatives of CARICOM, Canada and the United States.

“In any case, if it’s done in that kind of chintzy way, it would look as though CARICOM is a sidekick for Canada and the United States. For what we need is Haiti, as a member of CARICOM, to welcome this CARICOM group…,” Gonsalves said, adding that that group cannot impose a solution.

“It’s Haitian people, all the people inside of there have to discuss what consensus they’re going to come to and what government of national unity they’re going to form,” he said, noting that some people would suggest sending forces into Haiti before the process is concluded.

“But if you send the forces before that process is concluded, consultation and a government of national unity, you’re in danger that significant sections of the Haitian population or even the majority may see such a force as not a force to help the Haitian people but to prop up the government which they consider not to be legitimate,” Gonsalves said.

He said SVG doesn’t want to find itself in that position.

“In any case, we’re very supportive of something to be done for Haitian people … But you have to learn properly the humanitarian, the security and the political. You can’t just link humanitarian and security and forget the political and there is a lot of tactical confusion because there is no strategic clarity.”

Gonsalves said local police officers are English-speaking while those in Haiti speak Creole and French.

“They don’t speak the Creole language, and you don’t know if the man who you’re embedded with is a gang man and you can’t understand the language,” Gonsalves said.

“One thing you know I’m not is when it comes to public policy, I’m not a reckless man. So I staking out the position of St. Vincent and Grenadines publicly because it reaches a stage now, in my judgment that this has to be done.

Gonsalves said the people of the region would say he is taking sense.

Gonsalves said the situation in Haiti is deteriorating daily and “requires urgency.

“And Haiti is a member of CARICOM. We have historic links. So, you can’t wash your hands now, you can’t be Pontius Pilate. But it is how you engage. And we have to engage in a manner which will bring results for the good results for the Haitian people, because they have been too many interventions which have made things worse,” Gonsalves added.

One reply on “SVG will not send troops to Haiti”