Vincy farmers to get free fertiliser for a year 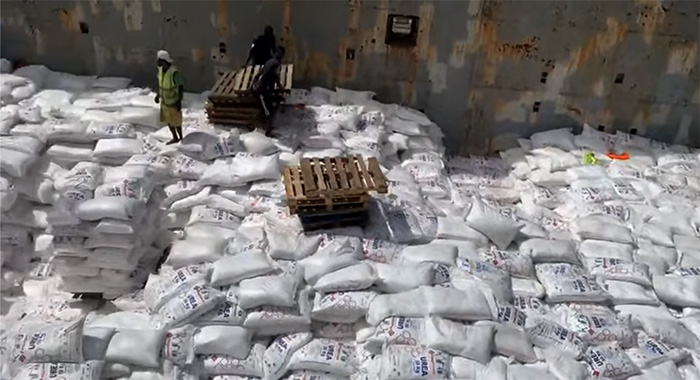 Urea being offloaded in St. Vincent this week.

Farmers in St. Vincent and the Grenadines will receive fertiliser for free for about a year as a result of shipments of urea from Venezuela as well as different types of fertilisers from Morocco.

A delegation from Morocco visited SVG this week and held talks with Prime Minister Ralph Gonsalves and other government officials.

The delegation included Morocco’s Director of International Development, Gonsalves said, adding Rabat and Kingstown are “seeking to negotiate a roadmap for relations over the next three to five years.

“And we have made progress,” the prime minister said on NBC Radio, adding that he is hoping to visit Morocco before Christmas to sign off at the political level what was agreed between both nations.

“That’d be a time pretty close to Christmas because the schedule is very tight. You know, very, very tight,” Gonsalves said.

He said that the discussion has resulted in good news for Vincentian farmers, noting that Morocco normally gives to SVG annually 160 tonnes of fertiliser of different types.

He noted that Venezuela has also delivered to SVG, under the Petrocaribe agreement from Venezuela, 40,000 100lb sacks of urea, which is being distributed to farmers.

“And then next year, in one or two shipments, we will get the other 10,000 sacks of fertiliser,” Gonsalves said.

“It would mean essentially that next year once we finalise this with the Moroccans and everything is on target, no farmer would be spending money on fertilizer next year or hardly any expenditure will be done on by them individually on fertiliser, which is a big boost to them. Because you know that’s a big cost, fertilizing the soil.”

He said that Moroccans are in SVG doing some soil fertility testing.