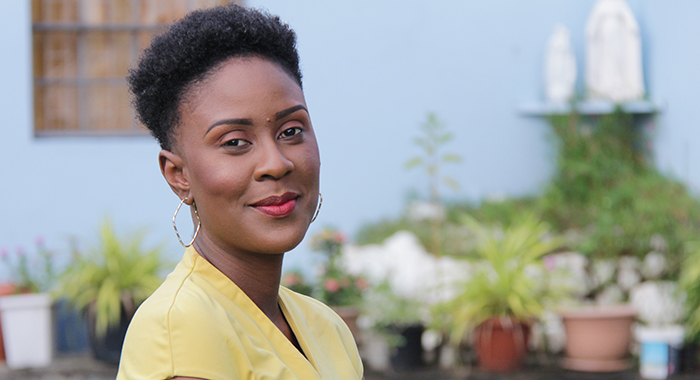 Educator Vakeesha John, who was dismissed from her teaching post last year, is vying to lead the NDP’s Youth Arm.

A teacher who was dismissed from her post last year over the COVID-19 vaccine mandate is the sole candidate to lead the Young Democrats, the youth arm of the main opposition New Democratic Party (NDP).

Vakeesha John, of Layou, has been campaigning via social media for the position, using the slogan “Your Future: Vote Vakeesha”, an echo of the theme of the convention: “My Decision: My future”.

Brenton Smith, secretary-general of the NDP, told iWitness News that John is the sole nominee for the post. He said that so far, the vice-president post is a two-way race between Kimeisha Ollivierre and Esteban Richard-Hernández.

One candidate, Nicheisha Roberts, has so far been nominated to the post of public relations officer.

Smith said it is possible for challengers to emerge from the floor, at Sunday’s convention at Democrat House, the NDP’s headquarters in Kingstown.

“My vision for Saint Vincent and the Grenadines is simple and clear; the youth must be the focus. I look through the lens of a Vincentian youth and though I twist and turn the camera, looking from different angles, the picture remains the same. Our youths are creative, brilliant and willing but they are constantly ignored, victimised and so, many are leaving.”

John said the picture doesn’t “reflect my vision of a bright SVG.”

John, 28, holds a Bachelor of Science in criminology and criminal justice with minors in psychology and international relations and iWitness News was reliably informed that she is pursuing studies at the degree level in another discipline.

She has eight years’ experience as an educator, seven of which was spent as a secondary school teacher before being dismissed under the vaccine mandate.

“I am ready to capture the talents, energy and brilliance of our young people. I am ready to be the president of the Young Democrats of Saint Vincent and the Grenadines,” John said.

She said that if elected to the post, she would engage SVG’s youth in educational programmes and create new and support existing sporting activities for youth.

The aspiring youth leader has pledged to utilise the skills of the nation’s creatives to foster and promote the culture of SVG.

She said she would develop and implement a disaster management programme, secure finances through entertainment and fundraising activities, and advocate for freedom, equality and just treatment for all Vincentians.

Since being dismissed from her post, John has been offering her services as an educator in private tuition, teaching people to “’right’ English”.

However, she has also ratcheted up her political activism, using her Facebook page as her main platform.

In a Nov. 14 post, she said that many people are “sickened by my constant political posts but are not sickened by the ULP’s constant efforts to oppress Vincentians.

“Guys, ladies, by now you should all realise I will not stop. This is within me. Please, protect your mental health while I fight to preserve mine amid oppression, injustices, etc. Please delete me. I literally come here to talk politics almost daily. Politics is bread. Politics is livelihood. Politics is education. Politics is poverty,” John said.

“To make it clearer, politics disturbed my livelihood. Politics tried to take away my bread. Politics made me struggle a bit more as a child seeking an education, being robbed of scholarships. Leave me and politics let us be. We are one. I am Vakeesha Ashaki Political John.”

And, in an Aug. 29 Facebook live broadcast, John wore sunglasses at night while talking about “the state” of “ my dear country St. Vincent and the Grenadines”, including issues in the education system.

“But I’ll tell you something, St. Vincent and the Grenadines is so dark right now and some of you still put on a shades. Y’all refuse to take in the bit of light that there is,” she said as she removed the sunglasses.

“Somebody who tries to have a proper discussion on leadership, you start getting upset. You put on a shades as if you don’t even want the light either.”

John has also joined the protests in Kingstown calling for the reinstatement of teachers dismissed under the vaccine mandate and was among residents of Layou who protested against a third wharf being built in the Central Leeward town to facilitate the export of aggregate from a quarry.