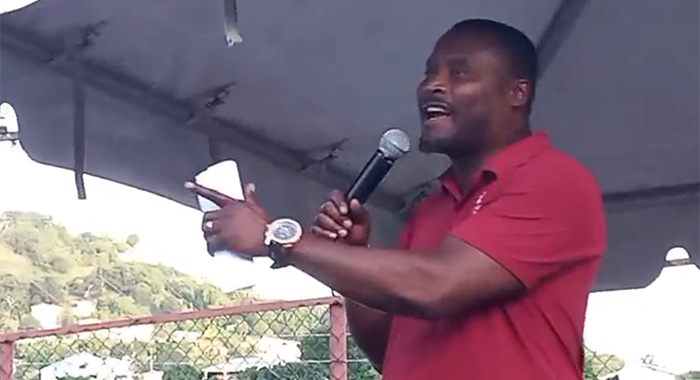 The Reverend Kelron Harry speaking at the St. Vincent and the Grenadines Teachers’ Union’s Solidarity March and Rally in Kingstown on Friday, Nov. 18, 2022.

A pastor says that the church must be willing to speak truth to the powerful.

“How can I stand in the church and say that I am good, and I am serving a good God and I see evil happening to the people, the citizens of the nation of which I am a part of and I remain silent?” the Reverend Kelron Harry said on Friday.

Delivering the featured address at the St. Vincent and the Grenadines Teachers’ Union’s Solidarity March and Rally, Harry said he would have to repent if he remained silent.

The march and rally was held to commemorate the 1975 tear gassing and arrest of teachers by the government.

“And today, I am glad I am standing with you, the Teachers’ Union of St. Vincent and the Grenadines, and I pray God’s blessings upon you,” Harry said.

This year, the annual rally came as the High Court prepares to hear, on Nov. 29 and Dec. 1, a lawsuit that the Teachers’ Union, Public Service Union, and the Police Welfare Association have brought against the government.

The unions are suing the government over the dismissal of their members who did not take a COVID-19 vaccine by last December, as mandated by law.

Jomo Thomas, lead counsel for the unions in the lawsuit, told Friday’s rally that the unions will triumph as both the facts and the law are on their side.

“And as was declared by your counsel, I pray great success for you, because you deserve it. In Proverbs 3, it says that you are to do good to those who deserve good, as long as it is in your power.

“In Romans, it also says give honour, to whom honour is to you. And I believe that our teachers who deserve honour have been treated unfairly. And it is time that they received the reward that is due unto them.”

He said that the march and rally is a worthy cause, adding that many people have asked him why he stands with the teachers who were fired because of the mandate.

Harry said people also ask him why he says he opposes the law that was passed that caused the teachers to lose their jobs and threaten their benefits, even as the situation does not affect him directly.

The pastor quoted Martin Luther King Jr., when he said:

He further noted that King said, “We will have to repent in this generation not merely for the hateful words and actions of the bad people but for the appalling silence of the good people.”

“We must stand up with and for our teachers. They are those who bring meaningful and significant change to our nation. Our teachers are key in nation building, so how could we turn our backs now?”

He said that teachers should be respected and not debased.

“And we must stand up and speak up. We must be willing to speak truth to the powerful and speak such truth with great power. Our best teachers, all of our teachers, deserve our best.”

2 replies on “Church must speak truth to power — pastor”