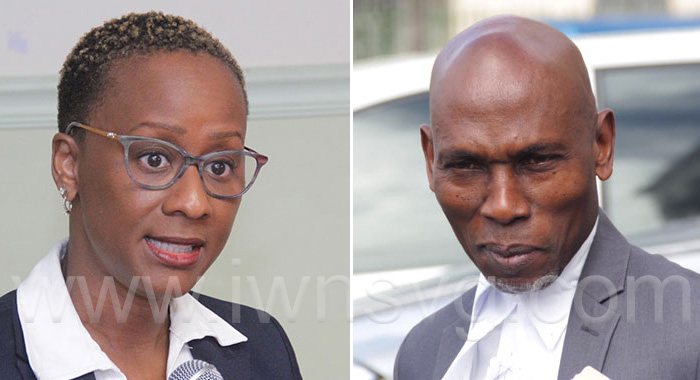 The lead counsel for the public sector unions in the COVID-19 vaccine mandate lawsuit against the government says his team will definitely cross examine Chief Medical Officer, Dr. Simone Keizer-Beache at the trial on Nov. 29.

“We know for sure we are going to cross examine Simone Keizer-Beache…” Jomo Thomas told the Teachers’ Solidarity March and Rally, in Kingstown, on Friday, in commemoration of the 1975 tear gassing of teachers by the government.

“And when our lawyers finish with Simone Keizer-Beache who put forward this foolish thing about she doing an affidavit, … and when we finish with all of the others — because we haven’t decided yet, who all we will cross examine …, Justice Henry, who is an outstanding jurists, would come back and say not only to the government, but the people of St. Vincent and the Grenadines that the government’s action violated the Constitution and that it violated the laws of St. Vincent and the Grenadines,” Thomas said.

“And as a consequence, you, all of you who stood firm, all of you who stood and took a stand for your integrity, the autonomy of your body, you will be made to be justified in all that you do and this union, you’ll remember that it’s the union that stood with you and you must stand with the union,” the lawyer said.

The SVG Teachers’ Union along with the Public Service Union and the Police Welfare Association, is suing the government over the dismissal of public sector workers, including nurses, teachers and police officers last December as a result of the COVID-19 vaccine mandate.

Under the mandate, most public sector workers were required to be vaccinated against COVID-19 vaccine or be considered to have abandoned their jobs.

Thomas’ firm has repeatedly won lawsuits it has brought against the government in connection to its actions against workers.

He noted that some people are saying that the unions cannot succeed in the extant matter.

The lawyer, who is a former senator and candidate for the ruling Unity Labour Party and a former speaker of the House of Assembly under the ULP administration, noted that people had made similar comments in the case that the Teachers’ Union brought against the government over the dismissal of educator Otto Sam.

He further noted that similar sentiments were expressed when the Teachers’ Union sued the government for the failure to rehire educators Addison “bash” Thomas, Kenroy Johnson and Elvis Daniel, who resigned their post in 2010 to contest the general election that year.

The trio, who ran and lost on opposition New Democratic Party tickets, were forced to resign after their application for election leave, under the 2005 agreement the government signed with the Teachers’ Union, was denied.

Thomas said that in the case of the vaccine mandate, the government violated the Constitution.

They said the government declared a medical emergency, but disregarded the Constitution of St. Vincent and the Grenadines.

“… Section 17(2) of our Constitution says that a state of emergency can be passed if there is an earthquake, fire, war, pestilence or infectious diseases,” Thomas said.

“Well, I ain’t that smart, but I’m sure that the COVID plandemic was indeed an infectious disease. So, you can’t dance around it and say, ‘Oh, what we did was to — if you notice we ain’t lock it down tight like a drum, all we did was to say you can do this, and you can do that.’”

Thomas said the intended effect was the same.

Thomas said that like with previous labour relations matters, the union said they wanted to fight the matter in court.

“And the unions are on the way to a big and massive victory.”

He said that a few years ago he was present when another lawyer was appearing before the Court of Appeal.

“And I’m here to tell you today on this question having to do with the COVID mandate, the government does not have the facts with it and it certainly doesn’t have the law with it.