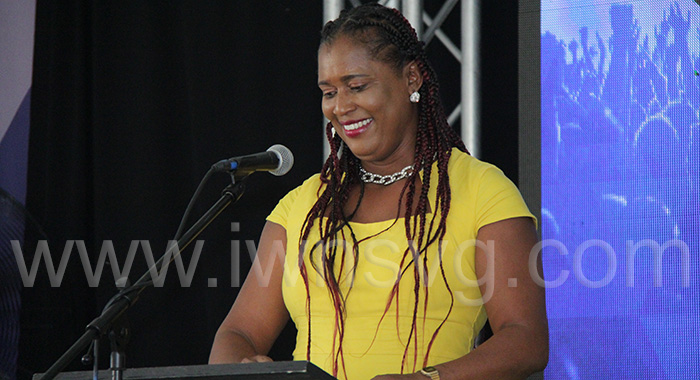 “Youth the Present Answer to the Future”. Not many young Vincentians would recognise this slogan or the organisation to which it belongs.

It is the slogan of the National Youth Council (NYC), which has been dormant in St. Vincent and the Grenadines for over 15 years.

“It is a crying shame that in a country with the majority of the population being young people there is not an active youth council,” Opposition Senator, Shevern John told the Young Democrats, the youth arm of her New Democratic Party at their convention in Kingstown, on Sunday.

“It is a crying shame that the powers that be have seemingly, systematically dismantled our once-vibrant National Youth Council so they can continue to suppress and abuse the youth of this nation,” John said.

She said it was the NYC that moulded most of the current national leaders, including current ministers of government.

“Brother Israel Bruce stands testament to that, as a former President of the National Youth Council,” she said, referring to the other NDP senator, who also addressed Sunday’s convention.

“Many of our schools still don’t have students’ councils and we certainly don’t have a National Student Council,” John said.

“These were very active organisations under the NDP administration. This current NDP understands and recognises the importance of these organisations and will make it a priority to re-establish these bodies and support them when we are elected into government when the next general elections are called.”

The convention was held under the theme “My Decision, My Future!” and John told delegates it is important for them to understand “why efforts are made to suppress you and diminish your future.

“Do you know that the celebration of March 14 as National Heroes Day is because of the strong efforts of the National Youth Council?”

She noted that the March 14 holiday replaced the celebration of Discovery Day on Jan 22.

After the ruling Unity Labour Party came to office on March 28, 2001, it scrapped the Jan. 22 holiday and replaced it with March 14.

“Led by the NYC, students turned up to school on Jan. 22 in defiance. I can name many other accomplishments as a result of youth activism — something that the NDP has a track record of encouraging,” John said.

She said that the European Union has noted that youth organisations do several things for young people.

Youth organisations focus on promoting and ensuring young people’s democratic and social rights; encourage social and political participation at all levels in community life; and offer “opportunities for personal and social development through leisure activities, voluntary engagement, and non-formal and informal learning.

“Listen to this and ask yourself whether there is an organisation currently operating in SVG that performs these duties,” John said.

She said it is critical that young people make sound decisions about the organisations they align themselves with.

She told the Young Democrats that they should align themselves with organisations that demonstrate organisational commitment. “This means that the organisation is not only using words, but that it makes a deliberate effort to appoint Youths to decision making positions. You are not just a rubber stamp!” John said.

It must create a safe space for youth involvement. “Participation within is accessible, and you are allowed to bring your varying diversity.”

And there must be a youth-friendly environment that is safe, respectful and positive.

“They must embody all three! They should not have one and not the other two. That is a failing grade. The only passing grade is to have all three traits,” John said.

“Giving young people a place in decision-making builds a broader base of citizen involvement and creates stronger, more inclusive communities. Youth participation is necessary in the development of active citizenship because it balances young people’s social rights with their responsibilities.”

“Research has shown that young people who are supported to participate in decision-making are more likely to have increased confidence and self-belief, exercise positive career choices and have greater involvement and responsibility in the future,” John said.

“Youth participation challenges negative stereotypes of young people and helps break down barriers between older adults and young people. Involving young people in decision-making can improve understanding about young people and create a greater awareness of youth issues in any organisation.”

John said that SVG is plagued with “so many social and economic ills that directly and indirectly affect our young people”.

“SVG has record high unemployment. It is highest among young people under age 25. Our productive sector, which is primarily made up of the youth, is forced to migrate or seek employment out of SVG. It is almost as if you can never expect to elevate yourself in this country.

“Our young people are being exploited and ‘sexploited’. This has to stop! The government has grown arrogant and lazy, and convinced that they are always right and accepts no criticism. This has to stop,” John said.

“My heart aches for our young people when I see how other countries — including our neighbours — are putting measures in place to position their young people for personal, economic and professional growth; while in SVG there is a general stagnation among our youths. Here, you are expected to have a party card, or have a certain surname or belong to a certain privileged clique, or give up your dignity in order to get by.  This is so sad.”