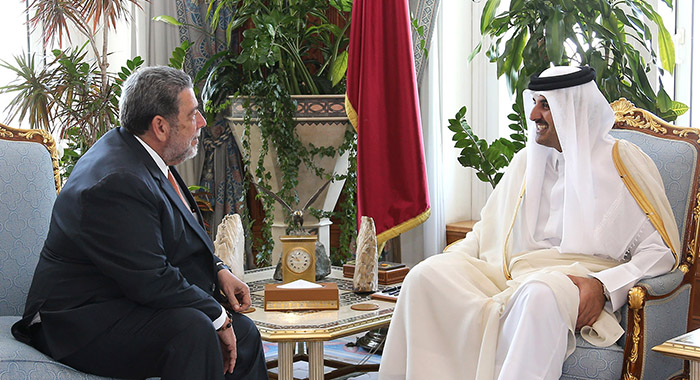 Prime Minister Ralph Gonsalves has defended Qatar amidst criticism from some western countries over its hosting of the 2022 FIFA World Cup, which opened on Sunday and will run for a month.

Qatar is the first Arab country to host a FIFA World Cup competition.

“Qatar’s historic achievement in this regard is truly impressive for a small, though wealthy, Arab country.  It is a mark of the growing stature and influence of the State of Qatar in the global political economy,” Gonsalves said in a press statement on Monday.

He said it is, therefore, “unfortunate, and prejudicial to global peace, security, and progress, that Qatar has faced unjustified, even deranged and unhinged, criticisms as hosts of the FIFA World Cup, emanating from some non-governmental organisations and ‘tabloid’ journalists located in North Atlantic countries such as Britain, the United States of America, and Western Europe”.

Gonsalves said the bulk of the criticism, “dressed up as high principle, is laced with Islamophobia, racism, anti-Arab sentiment, hypocrisy, and profound disrespect, derived from the notion that a small Arab country like Qatar should never aspire to global influence”.

He said critics sneer at, and mock, Qatar’s small population size of 3 million, of which only about 400,000 are Qataris.

The prime minister said the rest are Qatar’s population are migrants, “who by and large, enjoy the host country’s hospitality.

“The truth is that Qatar is an amazing country that is soaring to higher heights!” said Gonsalves, who has made a number of official visits to Qatar, including in February.

“Indeed, the unjustified and jaundiced criticisms of Qatar as hosts of the FIFA WORLD CUP land the critics at a place where they seem to think that the only countries to be eligible to host the WORLD CUP  are those which have a watered-down Christian heritage or no religious core values whatsoever, and which subscribe to a universal culture of atomised individualism (as distinct from that of an uplifting social individualism), nihilism, and a globalised culture of neo-liberalism amidst all its malcontents/discontents,” Gonsalves said.

“Thus, the State of Qatar is pilloried for its restrictions on alcohol consumption; its opposition to homosexuality, and sexual permissiveness; its stance against wanton abortion; its embrace of Islamic values unconnected absolutely to any form of homicidal violence; its tightly-knit family systems; its rejection of a future decreed by the cultural tsars of western modernity with their nihilistic project and jaundiced relativism; and its promotion of Arab nationalism within an appropriate universal space.”

The prime minister said that Qatar has chalked up “some very impressive achievements” which are “compelling” in its hosting of the FIFA WORLD CUP.

He mentioned a “Very High” Human Development Index (HDI) assessed by the United Nations Development Programme, a nominal, annual per capita gross domestic product (GDP) of US$83,000, ranked outstandingly at 5th in the world.

Gonsalves said Qatar has a history of hosting regional and international sporting and cultural events, including the Asian Games in 2006 and is a highly sophisticated and organised country with high quality education, administration, governance, science, and technology but grounded in Islamic and hereditary traditions.

Qatar also has “a very high level of civilisation in central material particulars,” Gonsalves said, adding, “Incidentally, its Museum of Islamic Art is one of world renown; so, too, its universities, health system, housing, physical infrastructure.”

He further mentioned Qatar’s ranking as the “World’s Safest Country” and its establishment, consolidation, and expansion of the Al Jazeera network, a global communications entity.

Gonsalves also said Qatar is a highly respected member of the international community which subscribes to the fundamental tenets of the Charter of the United Nations and a multilateralism of peace, security, and progress for all humanity.

“St. Vincent and the Grenadines is an independent country with a functioning liberal democracy but with a symbolic external colonial remnant (The British sovereign) as nominal Head of State. Qatar is a semi-constitutional monarchy headed by a home-govern Executive authority, the Emir,” Gonsalves said.

“There are, of course, differences in the two countries’ governance apparatuses and legal regimes. However, in our complicated and interconnected world, we are all obliged to respect each other’s evolved systems of governance and economic arrangements.  Undoubtedly, all systems of governance continue to evolve in their people’s interests and as the circumstances admit.”

He said that people in St. Vincent and the Grenadines “celebrate the amazing spectacle and sporting excellence on display in Qatar at the 2022 FIFA World Cup.

“It is an obligation of the world’s peoples to join in this celebration as a contribution to global friendship, peace, security, and progress.  To be sure, there are limitations and weaknesses in the endeavour, but let us not make perfection the enemy of the good.  The strengths and possibilities are immense,” Gonsalves said, adding, “We are sure that Qatar will continue to be magnificent hosts of World Cup 2022!”

He said SVG has friendly relations with Qatar “although we do not have any practical bilateral programmes.

“Our two countries work well together on global affairs in all the relevant international fora. Qatar is a force for good in our difficult and complex world.  We consider Qatar to be a friend of St. Vincent and the Grenadines.  And we thank them yet again for supporting our country’s successful candidacy for the United Nations Security Council on which St. Vincent and the Grenadines sat as a non-permanent member in 2020-2021.”

“We are friends of all, we strive for a better world. Let World Cup 2022 go on without the mountain of humbug by the hypocritical critics.  St. Vincent and the Grenadines affirms its solidarity with Qatar!”