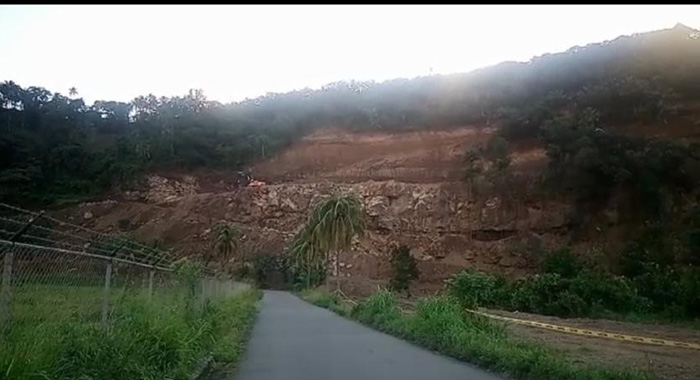 The quarry site in Richmond.

Residents of North Leeward — in particular, Fitz Hughes and Chateaubelair — will stage a “No Quarry!” demonstration today (Tuesday) to voice their dissatisfaction with the “disrespect” shown by the Unity Labour Party (ULP) government in its handling of the quarry project in Richmond.

Residents said their main concern is the lack of consultations prior to the project, as well as the lack of an environmental and social impact assessment studies by independent consultants.

Despite the lack of these prerequisites and objections by National Conservation Trust, the North Leeward Heritage Preservation Front (NLHPF),  the opposition New Democratic Party (NDP) and, among others, private investors, preparatory work has begun, and productive agricultural lands have already been destroyed to make way for the project.

A second public awareness meeting spearheaded by the NLHPF was held in Fitz Hughes on Nov. 19, where several speakers voiced their dissatisfaction with the government’s handling of the quarry project which has been granted several concessions.

Quoting directly from the agreement, Fitz Bramble, parliamentary representative for East Kingstown, pointed out that 100% waivers were granted for VAT, Customs duties and Customs Service Charge on all equipment and spares for the project.

He noted that the quarry was also granted a waiver of export taxes and levies, and a 100% exemption from corporate income tax and withholding tax for 15 years.

Bramble, an opposition lawmaker, noted that these waivers and concessions are not granted to local people operating in SVG, and said this was bad governance and bad policy, which gives a free hand to foreign investors while neglecting local entrepreneurs.

Daniel Cummings, MP for West Kingstown, said he was confronting “bad politics”, adding that politics is good and necessary to run the affairs of a country.

The opposition lawmaker, however, said that when bad policies, like the Richmond quarry project, come on stream, and in the absence of the required environmental and social studies, they cannot bulldoze their way and expect sensible people to accept that.

Meanwhile, Harvey Farrell, a retired health educator, pointed out that the quarry is likely to produce large quantities of silica dust.

When this dust is inhaled, the natural immune system cannot break it down and it causes irreparable damage to healthy lungs.

Farrell, who is also assistant general secretary of the NDP, said that the dust will create additional problems for asthmatic people.

He said the quarry would definitely be a health hazard as it is half a mile away from a school.

Community activist and qualified teacher, Troy Prince also supported the call for the closing down of the quarry project.

He encouraged parents to join the protest march and rally on behalf of their children and the health of the community.

Rayneau has leased 59 acres of state-owned agricultural land for 30 years to operate the quarry.

Agricultural scientist Clive Bishop said the lands were wrongfully leased to Rayneau as they are actually ancestral lands of the indigenous people of SVG.

He said that had the government held discussions prior to granting concessions for a quarry, this protest action would not have been necessary.

Bishop said the checklist of potential social and environmental risks which appears on both lease and contract with the government, include # 7, which asks, “Have local communities or individuals, given the opportunity, raised human rights concerns regarding the project during the stakeholder engagement process?”

The answer is “no”, Bishop said.

Donald De Riggs, a director of a medical ganja farm, said that his company was never informed about the quarry, although MP for North Leeward, Carlos James was present at the launching ceremony of that business.

De Riggs said that the company invested substantially to fence the property, build proper accommodation and toilet facilities, install security cameras as well as paying registration fees, “only to watch the beginning of the degradation of the environment, less than 100 feet away from the farm”.

He said workers on the farm had to be laid off, “due to this unwelcome development”.

De Riggs also called on parents to bring their children to the protest march.

The keynote speaker was primary school principal Adonis Charles, who is president of the NLHPF.

Charles said that despite his support for the ULP, his is a principled position, due the gross disrespect shown to the farmers and residents of Chateaubelair and Fitz Hughes.

He explained several contentious aspects of the agreement and lease, arguing that if the quarry is allowed to proceed, North Leeward residents would be the losers socially, economically, environmentally and from a health standpoint.

The event also included a slide presentation of the current destruction of the environment as the quarry prepares for operations.