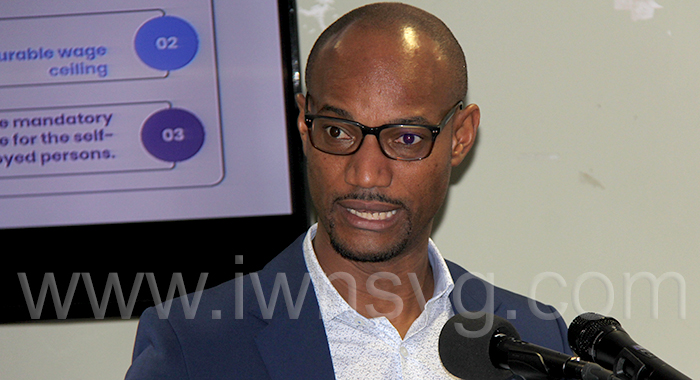 Stewart Haynes, executive director of the National Insurance Services, during the consultation with the media in Kingstown on Tuesday, Nov. 22, 2022.

The option being considered for reform of the National Insurance Services (NIS) include phasing out the public service pension system, aligning retirement and pension age, capping the portion of one’s salary that is paid as pension, and making NIS contributions mandatory for self-employed people,

Stewart Haynes, executive director of the NIS, outlined the options to the media during a consultation in Kingstown on Tuesday.

The consultation came amidst discussions about pension reform in St. Vincent and the Grenadines, with Haynes saying that reform must take place before 2024, if “draconian” changes are to be avoided.

He said that like Anguilla, the government could consider capping the replacement rate — the portion of a person’s past earnings that they receive as a pension.

Currently, some people could receive more than 120% of their past earnings as pension, since retired civil servants are entitled to both government and NIS pensions.

Haynes said that any changes in this regard would only affect future services, as contributions already made would be locked in at the current replacement rates.

“So [you] work for 10 years already, this 20% is protected. But for future services, consideration can be given looking at making the system sustainable.”

Haynes said the government could consider reducing the replacement rate form the current 60% to 57.5 or 55%.

“We have a front loaded benefit design — 2% within the first 15 years, 1% thereafter. You can consider 1% through your entire career … phasing out the early retirement option or the penalty [which] currently is 6%.”

For people born after 1964, the retirement age is 65 years old. However, if they choose to retire at age 60, their pension would be reduced by 6% for each of those years. That is, it will be reduced by 30%.

Further, currently, retirees receive their civil service pension at age 60. Haynes suggested that the age at which civil service and NIS pensions are paid be aligned.

He said that mandatory employee contributions could be another option for reducing the future cost of a pension plan.

Haynes said he attended a world Social Security Forum, which revealed that coverage among self employed globally is less than 20%.

“It’s a real challenge. In the reform measures, we recommend that we make [contributions by] self-employed [people] mandatory because an important system like pensions and social security shouldn’t be the matter of choice,” Haynes said.

“It should be mandatory for all workers, for equity,” he said, adding that in Grenada, it is mandatory that self-employed people make contributions to the social security system there.

“Mandatory coverage doesn’t mean I’m locking them up tomorrow if they don’t pay. … we have to engage in education and sensitisation. Now we use moral suasion,” Haynes said.

He emphasised that social security systems were originally because “persons have limited avenues to save or the discipline, sometimes to save for retirement.

“And what you would have is a burden being on the government and so forth. So that’s why these systems are established to provide that sort of  financial safeguard.”

He said the reform could also adopt St. Lucia’s approach, “where you phase out the public service pension system for new workers or you can increase the salary averaging period from final salary to average over five years, 10 years, whatever would make the system sustainable”.

Haynes, an actuary, noted that his role as head of the NIS is to advise the government on the best course of action. He said that he would give the best professional advice he can, adding that this is to say that reform is urgently needed.

“So these are changes that government can consider,” Haynes said, adding that consultation is important before any decision is made, hence the consultation with the media.

Haynes suggested that the contribution rate can be increased as well as the insurable wage ceiling of EC$4,333.

“That has a two-fold effect where it could boost current income but increase long term cost,” he said, suggesting that the NIS could also introduce mandatory coverage for the self-employed.

“These are the options available for social security to contemplate with sufficient consultation, sound, well-grounded, well-thought-out advice from actuaries and so forth and so on.

“… [The NIS is] projected to be unsustainable in the medium and long term due to population ageing, maturity and generous design. Our main drivers: rapidly-growing pension costs, there’s an urgent need to reform to improve sustainability and inter-generational equity,” Haynes said.

He emphasised that the current pension system “is too generous.

“It just can’t work,” he said, adding, “St. Lucia was here, where when you added two systems you got more in retirement than when you’re working.

“They made some changes and now for St. Lucia, they are entitled to one,” he said, adding that Grenada attempted to make changes as well, which were overturned by the court on constitutional grounds.

“Montserrat did the same thing,” he said, referring to phasing out the civil service pension and keeping only the social security payout.

“The typical 127% is unique. It’s unsustainable for our small island of St. Vincent,” Haynes said.