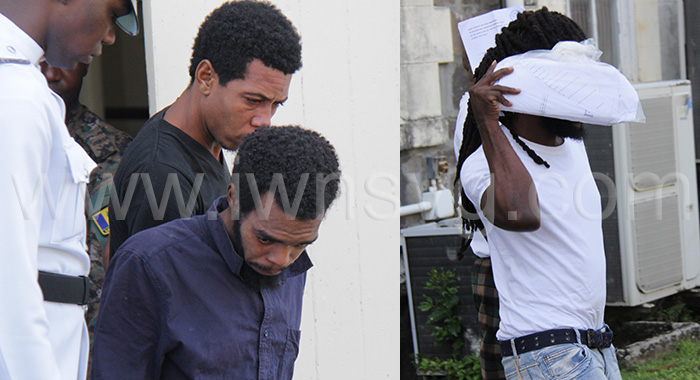 From left, Romrado Wright, Mikhail Thomas and Okqueto Jovan Quinty Jones on their way to prison on Monday, Nov. 28, 2022.

A 25-year-old man whose first sexual encounter was when he and two other men raped a 14-year-old girl on Christmas Eve 2016 has been jailed for 13 years and 10 months — two years less than his accomplices.

Justice Brian Cottle handed down the prison sentences on Okqueto Jovan Quinty Jones, Romrado Wright, and Mikhail Thomas, of Georgetown, at High Court No. 1, in Kingstown on Monday.

He noted that Thomas was sexually inexperienced, and the youngest of the assailants.

Unlike with the sentences of the two other defendants, who saw their notional sentences increased by one year, the judge moved down one year in Thomas’ case to arrive at a sentence of 13 years 10 months and 23 days.

Jones and Wright will each spend 15 years 10 months and 23 days in prison.

Before handing down the sentences, Justice Cottle said that when matters are indicated, he always asks and informs people who are not represented to take advantage of the opportunity to plead guilty if they know they are guilty as they get a one-third reduction in their sentence.

The judge said this is the case because it spares the victim the ordeal of having to repeat to a courtroom of strangers the horrible things that have happened to them.

He noted that the three men went through a full trial insisting that they did not have sex with the virtual complaint.

However, the jury did not believe them and returned guilty verdicts.

The facts of the case, as outlined by the judge, are that the three men, along with other men, were selling clothing and other items at Heritage Square, Kingstown, on Christmas Eve 2016.

The virtual complainant, who was then 14, came to the area and was interested in and speaking to a younger, teenage brother of one of the men.

As night fell, the three men stopped selling and some of their colleagues took the unsold items in a car and left.

The vehicle could not carry the trio and so they walked to the area of the Peace Memorial Hall to get transportation home.

The three men — two of whom were 20 and the other 25 — went there and saw what was happening and approached the two teens, caused the male to leave and demanded that the girl have sex with them.

They raped the girl and forced her to perform oral sex on them.

Jones no longer ‘young and stupid’

He said Jones is now 30 and the father of a 1-year-old child. He dropped out of Georgetown Secondary School in Form 3.

He had two minor previous convictions, which the court did not take them into account in arriving at its sentence.

Justice Cottle said that Jones indicated to the social worker he was on the scene and asked the virtual complainant to have sex with him but when she refused, he went away.

During the trial, he said he touched her breasts but did not have sex with her.

However, in his mitigation before the court, Jones said he regrets that because of his actions, his young son would grow up without his father.

His mother said he is close to her and assists her financially and asked for leniency.

The mother of Jones’ son told the social worker that she has four other children but Jones treats and supports them all as if they were his biological children.

His brother told the social worker that Jones was “a calm, cool guy” who was never troublesome.

In the community, Jones was viewed as a good person who allowed himself to be led astray by friends when he was young.

Fellow residents said he has since matured and is no longer “young and stupid”.

Wright had a previous conviction for an unrelated offence, which the court did not take into account.

He dropped out of Georgetown Secondary School in Form 4 and has a heart condition for which he is prescribed medication.

Wright said he did not have sex with the girl but was there when Jones did so.

He further said that he consoled the girl and further stated that he has sisters and would not like anyone to abuse them.

At trial, he said he touched her breasts but did not have sex with her. However, he told the police in electronic interview he had sex with her twice that day. He also admitted ejaculation.

His mother described him as helpful and said she hoped the court would go easy on him.

The social inquiry report said he helps around the house and the community said he is quiet and might have found himself in the wrong company when he committed the crime.

Meanwhile, the judge said that Thomas has no dependents and no previous convictions.

He dropped out of Georgetown Secondary School at Form 2 and is functionally illiterate.

Thomas did not wish to speak to a social worker about the incident and became visibly tearful.

Justice Cottle pointed out that his mother said she shares a strong, healthy bond with him, and noted that she came to court to speak on his behalf.

She did not think he would get involved in criminal activity and thought he was a virgin.

Thomas told the jury he had not had sex before the incident. He denied having sex with the virtual complainant but said he touched her breast.

His community expressed shock at his crime and said they were willing to plead for leniency on his behalf.

Justice Cottle said the men’s offence was serious, adding that the maximum penalty is life imprisonment – a notional sentence of 30 years.

He noted that there are sentencing guidelines which the court must follow, unless doing so would lead to injustice in a particular case.

Justice Cottle said he saw no reason to depart from those guidelines in the extant case.

In establishing a starting point of his sentence, the judge addressed the seriousness of the offence.

‘rape is abhorrent and must not be tolerated in SVG’

He pointed out the virtual complainant was suicidal at one point, adding that some member of her community blamed her and called her a liar, suggesting that she had had consensual sex with the men.

Justice Cottle pointed out that the teen was forced to perform oral sex on one of the men while another was having vaginal sex with her from behind.

He noted that the crime was a group assault and two of the men were more than 10 years older than their victim.

The judge established a starting point of 15 years in prison.

In the case of Jones, he said the aggravating features are that the crime was committed in the presence of others, the virtual complainant was particularly vulnerable because of her circumstances and was 14 years old.

He said she was assaulted by a group in which Jones played a leading role and that she was threatened.

Mitigating was the fact that there was no violence except that inherent in the act and the fact that Jones is still relatively young and is a good candidate for rehabilitation.

“But this was a very serious offence,” Justice Cottle said, adding that the circumstances suggest that it was an opportunistic crime.

He noted the mitigating factors of an absence of similar convictions and the prospect of rehabilitation.

“But the message must go out that rape is abhorrent and must not be tolerated in St. Vincent and the Grenadines,” Justice Cottle said.

The judge said that the aggravating features outweigh the mitigating factors and increased the sentence by one year.

He said that a guilty plea and expression of remorse might have been helpful to Jones.

The defendants spent one month and seven days on remand, and after subtracting this, for Jones, the judge arrived at a sentence of 15 years 10 months 23 days.

He said the aggravating and mitigating factors as regards Wright were similar to Jones and the court arrived at a similar sentence for him.

In Thomas’ case, the judge found that he was the youngest of the offenders and his role was considerably lesser.

The court held that as regards him, the mitigating factors outweigh the aggravating and reduced his starting sentence by one year.

5 replies on “Man whose first sexual encounter was raping girl, 14, jailed for 14 years”