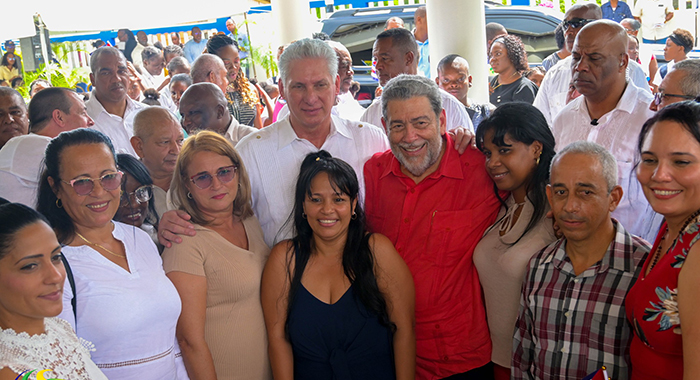 Prime Minister Ralph Gonsalves says the United States should support a programme similar to the one under which Cuban healthcare professionals provide services to countries in need.

Speaking Sunday as he addressed a joint event with President of Cuba, Miguel Díaz-Canel who ends a three-day official visit to SVG today, Gonsalves called on the United States to stop saying that Cuban health care professionals dispatched on such missions are victim of human trafficking.

He further said it would be equally absurd if Havana were to say that U.S.  professionals who provide healthcare to developing countries as part of NGOs are victims of human trafficking.

Speaking at the Modern Medical and Diagnostic Centre in Georgetown, a public facility built by Cuba and offering advanced health care, Gonsalves called on anti-Cuban US citizens to “leave Cuba alone in its internationalist humanitarian mission”.

“The United States of America, not able to understand the internationalist solidarity and selflessness of the Cuban people, they tell the lie and they put it in their reports, in congressional documents, in the State Department documents, that you, the Cuban professionals who are here, that you are victims of human trafficking.

He said that the Cuban “brothers and sisters, the internationalist workers” are in SVG because his government requests, from time to time, “the help of the Cuban government and people and you come to us voluntarily and on very good conditions of work and employment.

“And the United States of America must stop this lie. If they want to win affection in that regard, support a programme of Americans to provide a similar service to countries like ours which may need that service.”

Gonsalves spoke of the World Paediatric Project, a US-based NGO which has a headquarters in SVG.

“They come to us several times in the years and they provide freely to this country and others nearby and they come here for treatment, first class critical paediatric care, which Americans have to pay for but they get them free here through the World Paediatric Project.

“It will be equally absurd if the Cuban government were to say that they are engaged in human trafficking. They must stop these lies and badmouthing of Cuba as it is carrying out its selfless internationalist duty to help humanity,” Gonsalves said.

The prime minister said SVG and the United States are friends.

“We are friends of all and we strive for a better world. But don’t ask me, don’t ask this government to embrace your folly, your absurdities, which are determined not by  any logic or common sense, not determined by consideration of humanity, but because of presidential, senatorial, congressional, and gubernatorial politics of Florida, especially south Florida, where you have a significant number of anti- revolutionary Cubans,” Gonsalves said.

“So I make this plea to my American brothers and sisters, leave Cuba alone in its internationalist humanitarian mission. I make bold to say that since the dawn of civilisations, there is no  country in the world, no people, who have been as selfless as revolutionary Cuba and its people.”

Díaz-Canel is slated to address a special sitting of Parliament today before leaving to attend the CARICOM-Cuba Summit in Barbados.